Whispers of optimism are filling the dining-sphere as we embark on a new year. There's no question that a different reality still permeates the restaurant scene, with value remaining a high priority for both operators and customers. But there are also signs that things are loosening up a bit, as slightly "riskier" flavors, ingredients and dishes march onto menus. 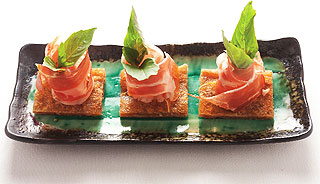 "Consumers are going to be more careful about spending for the next three to five years," predicts Colleen McClellan, food insights strategist at McCormick, "but the palates of the next generation are much more adventurous; they don't want the same old comfort foods." Max Duley, a culinary consultant based in St. Helena, California, adds: "Once the economy turns around, more playfulness should return to menus. But people still crave familiarity; it's more about re-positioning than reinventing."

We talked to these and other experts who have their fingers firmly on the pulse of the industry to find out what to expect in 2011. Here are the top restaurant trends they identified.

Fine-dining, white tablecloth restaurants were especially hard hit by the recession. According to an NPD/Crest 2010 report, visits declined as much as 16 percent in 2009. Although the segment has since picked up, customers continue to gravitate toward restaurants that offer top quality food with more cost-effective menus. "You can now get high-end food in unlikely places," notes Duley. "Chefs are taking over the corner diner, driving food trucks and opening single concept places that do one item really well—like burgers." In a related trend, fast-casual restaurants were one of the success stories of the downturn; sales in this category reached $23 billion in 2010, up nearly 30 percent since 2006, stated a recent Mintel foodservice report.

"It's all about casualization," says Andrew Freeman, president of hospitality consulting firm AF&Co. in San Francisco. "Design-wise too—hotels and restaurants are shedding the layers and going for a more casual look."

Snacking is now a daypart

Last year, breakfast was the daypart showing the greatest activity; this year it's the P.M. snack. A recent survey by Chicago-based Datassential revealed that 78 percent of operators that have experienced an uptick in off-peak hour business have seen it happen during the afternoon snack period (between 2 and 5 p.m.)

Mid-morning snacking also grew by 24 percent and post-dinner snacks (7 p.m. to close of business) by 20 percent. Most operators report having added between one and six items to their menus to appeal to off-peak hour snackers. Examples include The Cheesecake Factory's Roasted Pear & Blue Cheese Pizette, BJ's Restaurant's Hawaiian Shrimp Skewers and Panera Bread's Pumpkin Muffins with Pumpkin Spice Latte. All of these items come in under $5—smaller portions for smaller budgets. Food companies are also responding with snackable products to meet demand.

The do-it-yourself trend is strong, with both chefs and guests taking more into their own hands. Back-of-the-house last year, it was all about pickles; this year, meat reigns supreme, with operators ordering whole animals and butchering them in the kitchen. Housemade condiments like ketchup, infused salt and olives are also showing up.

Diners want to get into the DIY act too, and restaurants are obliging, with make-your-own stir-fries (Genghis Grill), pizza (Stone Flats), cupcakes (Treat Cupcake Bar), frozen yogurt (Menchie's) and even cocktails (San Francisco's Fifth Floor and Copa d'Oro in Santa Monica). Freeman dubs these "omakase cocktails"; the bartender custom-creates a drink based on a guest's liquor, ingredient and flavor preferences.

Menus are still capitalizing on Asian, Latin and Mediterranean flavors, but chefs and menu developers are digging deeper. "Japan is a hotbed of ingredients that are now coming into foodservice," says Lisa Kartzman, a spokesperson for Roland specialty food company. White miso—a umami-rich enhancer for sauces and bases as well as soups—is a product introduced this fall. The theme of the CIA's 2010 Worlds of Flavor Conference was Japan: Flavors of Culture. "Japan is grabbing attention not just because of its wonderful flavor profiles and specific dishes," says Greg Drescher, executive director of strategic initiatives at the CIA, Greystone, "but more and more American chefs are energized by the Japanese passion for ingredients, techniques and tools. A generation ago, young chefs went to France to study; now they are increasingly going to Tokyo, Kyoto and elsewhere in Japan to round out their educations."

On the global front, Indian, Vietnamese, Korean and Thai also continue to grow, as evidenced by McCormick's latest products: roasted curry powder, roasted coriander and roasted ginger. Micro-regional American cuisine is gaining ground, too. "Diners are not only seeking authentic barbeque, they're looking for distinctive styles, such as Texan, Memphis, Kansas City and North Carolina," notes Eric Giandelone, director of foodservice research for Mintel. The same is happening with Cajun/Creole and Southwestern cuisines.

Year of the sandwich

Market research firm Packaged Facts noted in its Sandwiches: Culinary Trend Mapping Report that sandwiches are undergoing exciting flavor and quality upgrades, driven by artisan and sustainable ingredients and American regional and global flavor profiles. While sandwiches have long been a staple in QSR and casual concepts, fine dining chefs are making forays into the upscale sandwich sector; Graham Elliot's Grahamwich in New York City is a recent example. The new spot offers choices like Braised Pork Belly on a Hawaiian roll with grilled pineapple, hoisin mayo and spicy slaw. Even with upgrades, a chef-created sandwich offers good value when compared to a higher priced entrée.

"There's pressure on restaurants to add more healthy items in 2011, with mandated nutrition labeling for chain menus and the latest U.S. dietary guidelines emphasizing sodium reduction," says Mintel's Giandelone. Although there's no salt substitute yet on the market that's prevalent, some restaurants are working with manufacturers to lower sodium. McDonald's in Canada, for example, partnered with its tortilla supplier to reduce sodium in its wraps.

In other "healthy" news, whole grains and gluten-free products are getting more play on menus, and a number of restaurants have introduced "Meatless Mondays" to support vegetarianism. Flexitarian has gone mainstream, notes Freeman, and all-vegetable tasting menus are gaining traction in fine dining.