Around this time of year, a strange affliction besets some of the industry’s keenest observers. First, they feel a fever to predict what the New Year will bring, and that’s good. But the ailment somehow distorts their sense of time. They fall prey to a conviction that there’s a hard stop on Dec. 31, a tidy ending to the year and its restaurant trends. Come Jan. 1, they predict, another set of currents and directions will emerge, remaking the business as if there was no carryover from the past. 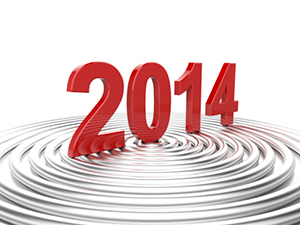 In reality, of course, the trends don’t stop and start just because we switch calendars. Local sourcing, for instance, has been a mega-shift for years, and will undoubtedly remain a dominant influence on menus in 2014.

The knack is spotting the ripples of the prior year that will surge into true tides in the new one. Here are a few of the little-noticed trends of 2013 that could build into significant influences on the restaurant business in the year ahead:

Group painting could be the new karaoke.  Restaurants are learning that a key to growing sales is moving beyond the core function of providing food and beverages. Experience is the name of the game. No wonder many places are teaming up with outside operations to host activities that facilitate conversation, networking and interaction, if not flirting and courtship. Picture a Tupperware party, but with better food and full bar service. Sometimes the draw is to get your hair done while trying new wines. In other instances, it’s a meet-up of persons with a common hobby or interest, convened by social media services like MeetUp.com.

That’s the mother trend. The preferred child seems to be evenings where people pay for painting lessons in a restaurant while they sip a glass of wine.  Everyone paints, talks, noshes, sips and has fun. There’s a service called Paint Nite that operates in a number of cities. There’s even a franchised version called Wine Canvas, which provides a teacher, easels, paint, brushes and all the other supplies, for which patrons pay an entrance fee.

Look for restaurants to add more ice-breaking activities by partnering with the providers of packaged theme parties for paying attendees.

LTOs will become an evil, though a necessary one. Wendy’s has delighted investors as of late, but that hasn’t stopped portfolio managers from sharply questioning the chain’s strategy when it comes to limited-term offers. In particular, they’re wondering why one of the strongest LTOs in the brand’s history, a burger served on a pretzel bun, was yanked at the height of its popularity.

Management explained that limited availability was part of the strategy for getting more customers into stores immediately. And, executives stressed, the plan worked better than expected. A franchisee told me his sales jumped 10 percent above the year-earlier tally because of the pretzel burger.

So, investors pressed, the item became a customer favorite. Tell us again why you took it off the menu. Didn’t you say it was a main reason patrons were coming into stores?

They’re not the only ones questioning the strategy behind LTOs. As we’ve reported earlier in this space, Domino’s, Papa Murphy’s and a number of other fast-food chains are reconsidering the tactical value of whetting the public’s appetite for an item, only to pull that product off menu boards while it’s still in demand. Why spend millions of marketing dollars to whet the public’s appetite for a product that might be pulled from stores before all the interested patrons have a chance to even try it? Isn’t it better to develop permanent draws, instead of going through the considerable trouble of rolling out products for a run of a few weeks?

Look for that line of thinking to become more common in 2014.

Promos will lose their luster. LTOs are ironically being questioned because they work so well. The dilemma is different with promotions, including some that worked like magical potions in the past. McDonald’s Monopoly? The real estate bust apparently extended to Park Place and Constitution Avenue, because Big Mac acknowledged its disappointment with the level of consumer interest. A Mighty Wings promo did so poorly that the chain admitted that it was stuck with unwanted supplies.

The industry’s Superman wasn’t alone in noting that a promo lost its mojo in 2013. Several casual-dining chains acknowledged poorer returns from new versions of the segment’s standard deal, two entrees and a shared appetizer for $20. The why’s are still unclear, but it seems the novelty has dimmed, and the new riffs aren’t all that different from the old takes.

Look for more steak and less sizzle to menu development in 2014.

Minimum-wage talk will change in tenor. It’s no longer a matter of whether there’ll be an increase, but how steep the hike will be, and what political body will enact it.  A federal increase may be the least of the industry’s concerns. States, counties and municipalities could raise the minimum considerably above the national threshold. Talk of resistance from the industry will give way to discussions of what small businesses might be able to get in return for paying higher wages.

Ganja lovers could become a sales target. And why not? Jack in the Box reports good results from its new Munchie Meal, a late night snack pack touted in mainstream commercials that could have worked as Cheech & Chong routines. Coloradan restaurants may soon enjoy the heightened appetites of indulgers in newly legalized pot, along with tourists seeking a different sort of Rocky Mountain high. Places in Washington state may also benefit from the state’s decriminalization of marijuana.

Expect more states to drop their bans on the recreational use of weed, creating an opportunity for restaurants that don’t mind being a little edgy (see the item above, on providing an experience).

“Hey, nice buns!” Expect to hear that more often as better breads continue to be embraced at the lower end of the restaurant spectrum. The year just ending showed that fast-food consumers believe brioche, flat bread and pretzel bread have a place on drive-thru menu boards. Next year, bragging rights will be exercised by chains that not only shoot for greater quality and variety in their sandwich breads, but also for freshness. Listen for more crowing about buns or breads baked daily (or more frequently) on premise, whether that distinction is an old one (i.e., Subway and Panera) or a newly incorporated edge (Carl’s Jr., with its fresh-baked buns, and whatever chains follow suit).

“Great thighs, too.” This is a personal conviction, based on behavior observed in supermarkets and the occasional employee-cafeteria line. Chicken thighs are going to become a hot menu item in 2014, the result of a richer flavor and a lower cost than other parts of the bird provide. The economic advantage will prompt more cooks and chefs to experiment with the dark meat, as some were doing as 2013 drew to a close. The creativity will prompt more consumers to give the thighs a try, and the more robust flavors will hook them.

The one prediction that’s a sure thing for 2014: The year will end with a flurry of predictions for the 12 months ahead.