An Australian fast-casual chain that specializes in grilled chicken “burgers” is set to open its first U.S. restaurant on Feb. 25 in Rancho Cucamonga, Calif. 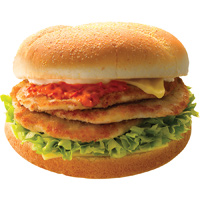 The patties are actually grilled fillets garnished with various sauces, including piri-piri. The signature preparation is the Bondi Burger, or two fillets topped with lettuce, mayo, cheese and Chilli Sauce, a proprietary hot sauce.

Another specialty of Oporto—the Australian word for burgers—is an Aussie-style “bacon burger,” actually made from pork shoulder rather than the belly and served for breakfast, or “brekkie” in Down Under parlance.  Other morning choices include a chicken and egg sandwich.

Oporto describes the menu as Australian with Portuguese influences, but it includes a number of items familiar to Americans, like wraps (called rappas on the menu) and French fries (listed as chips).

Oporto has about 130 locations in Australia, New Zealand, the United Kingdom and China. It’s being imported into the United States by Arnold Rodriguez, a veteran of the Del Taco quick-service chain.  His firm, Cluck Ltd., has already committed to opening two more outlets in California later this year.