Fads come and go, but true emerging beverage trends have staying power and growth potential. We’ve done some recon on what’s predicted to be the next big thing in craft beer, cocktailing and fast-casual drinks—the developments poised to make dollars and sense for operators in the year ahead. 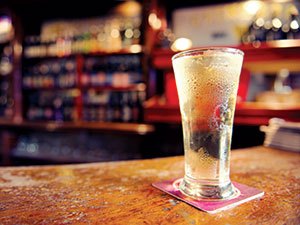 As the craft of cocktailing becomes more expressive and elaborate, mixologists are paying attention to selecting the right vessel to showcase their work and build “me-too” sales. Creative glassware is a way to upscale the cocktail program and justify premium prices.

In San Francisco, Dirty Habit at Kimpton’s Hotel Palomar differentiates its program with a curated collection of vintage cocktail glasses. “The beauty of it is that no two pieces are exactly the same,” says Bar Manager Brian Means. Customer response has been positive. “You can hear how excited guests are when they get a certain glass. The surprise element adds to the whole bar experience.”

At Fulton Market Kitchen in Chicago, Beverage Director Brian Sturgulewski takes an offbeat approach. “We turned the whole idea of drinks in antique glassware on its head,” he says. He sources  one-off glasses from the 1970s and ’80s printed with cartoon images from Star Wars, E.T. and Looney Tunes. The pop icons fit the restaurant’s decor, which showcases local artists’ graffiti and pop art.

As for the price-value equation: “I think customers are willing to pay for a well-crafted cocktail. They appreciate our program and the thoughtfulness behind the cocktails. Part of that thoughtfulness is the glassware,” says Means.

Beer in the mix

Even if you now have all the local craft breweries covered, the next wave of beer is starting to crest: beer cocktails, boilermakers and radlers. Beer-spirits mash-ups are the fastest-growing cocktails on leading chain restaurant menus, according to Chicago research firm Technomic. Radlers, an old-fashioned fusion of beer and lemonade or other juices, made their debut on the National Restaurant Association’s What’s Hot list in the cocktail category for 2015.

As for boilermakers, the old shot and a beer has been given a shot in the arm. At Fulton Market Kitchen, creative duos include Sri Lankan stout with housemade Irish cream (served car-bomb style), a local wheat ale with a shot of Grand Marnier and a can of Mexican lager paired with mezcal.

Sturgulewski views the combos as a way to introduce patrons to his wide-ranging spirits list: one of the most popular boilermakers is a grapefruit radler sided with Malort, a local liquor. “The boilermaker is a great way to engage guests who might otherwise not drink cocktails,” he says, because for a novice, a beer and a shot is easy to order. Plus, boilermakers are a good perceived value, says Sturgulewski. “For a dollar or so more, they get liquor with their beer.”

Hard cider enjoyed double-digit volume growth in 2014, according to Technomic’s BeerTAB report. The NRA also cited cider as a trend in its 2015 forecast. Choices are burgeoning, from American artisanal products to imports from England, France and Spain. All of the major beer producers as well as some craft brewers offer ciders, which means it’s easy to source from broadline distributors.

Operators say hard cider is ideal for fast casuals without a bar; stocking a few bottles in the reach-in or in an ice bucket by the checkout yields incremental sales. The flavor appeals to both beer drinkers and wine lovers. It’s also naturally gluten-free.

That’s one reason Asian Box, a five-unit San Francisco-based fast casual, designed a cider-centric beverage menu—it fits with the chain’s gluten-free Vietnamese street food. In addition, “cider has a bit of that sweetness and a bit of tartness, which works very well with our food,” says Culinary Director Chad Newton. Asian Box restaurants offer several bottled ciders and a few stores offer local drafts. “Our menu is streamlined, so we went the same way with the drinks, with a few really great artisanal products,” says Newton.

Cannabis cocktails: Even though bars can’t legally mix up a Green Dragon Drink yet, the times they are a-changing. Washington and Colorado have legalized marijuana, but combining it  with alcohol is still illegal in the U.S. Nonetheless, more than a few investigatory bartenders are taking cocktails to a higher level—surreptitiously dispensed under the bar.

Flavored whiskeys on fire: Brown spirits are luring younger drinkers with sweet-spiced versions. A hot and spicy cinnamon Canadian whiskey is the market leader, followed by a number of flavored bourbon brands. According to Technomic, cocktails with cinnamon in their names or descriptions were up 27 percent between 2013 and 2014.

Espresso-tonic mash-up: Freshly pulled espresso poured hot into cold, bubbly tonic water with ice; this European custom is more than the sum of its bitter and sweet parts. The appeal is to the caf-fiend tired of the usual latte. And for operators without a liquor license, espresso tonics can sub as mocktails.

Exploring Eastern Europe: With 6,000 years of winemaking history, indigenous grape varietals found nowhere else and ancient techniques such as aging in clay, Eastern European wines offer many talking points to intrigue customers. Wines from Georgia, Croatia, Slovenia and Hungary are relatively inexpensive, if a bit hard to find. An operational plus: there’s no sticker shock.