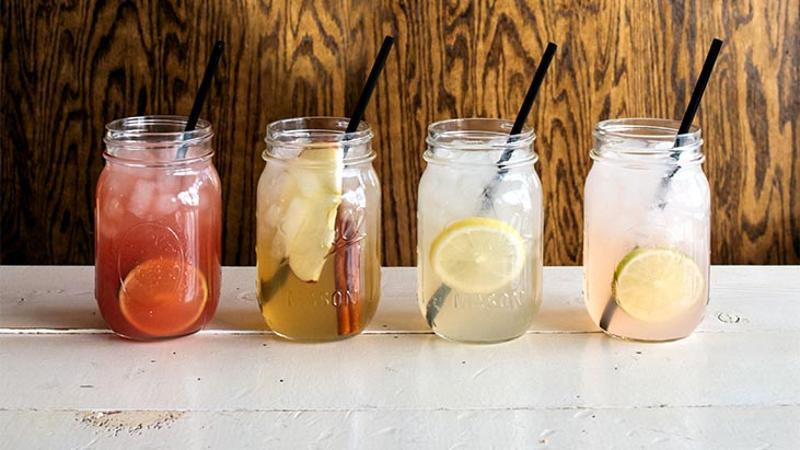 It’s one thing to whip up a signature beverage in a brick-and-mortar restaurant, where  access to soda lines, water heaters and ample prep and storage space come standard. It’s another when the kitchen, cash register, storage area and dining room share a few hundred square feet. But operators in two of the country’s urban food halls have found that the profits and brand recognition of signature beverages make adapting them to smaller digs worthwhile. And lessons from their small-space signatures apply beyond the food hall to other barless concepts looking to profit on drinks.

Without the fridge space

Revival Food Hall in Chicago didn’t custom design its 15 vendor stalls to suit individual concepts. So Brown Bag Seafood Co. made do without the hot water lines, soda lines and built-in coolers of its brick-and-mortar location when re-creating its signature fresh juice- and tea-based coolers.

Owner Donna Lee brews black currant and sunburst green tea in stockpots, buys bottles of club soda to inject effervescence into the best-selling gingerades, and repeatedly ices down bus tubs of backup craft coolers, since her 267 square-foot stall has no refrigeration.

Adding a cocktail was a no-brainer for Revival’s The Fat Shallot, since the hall’s umbrella liquor license enabled it to serve alcohol without “jumping through hoops” to get its own. The signature vodka-spiked ginger-lemonade cocktail is modestly profitable and easy to mix ahead of time in large batches—a lesson owners Sam Barron and Sarah Weitz learned through operating first as a food truck. “Customizing a menu based on your constraints is the key to success in a small operation,” Barron says. They also chose a cocktail that doesn’t go bad quickly. “If we were selling lemonade and going through plenty of stock, we’re still able to keep the vodka on the shelf,” says Weitz.

Space wasn’t as much of an issue as having the right equipment for healthy bowl brand Indie Fresh in New York City’s Gotham West Market. Gotham’s setup provides Indie Fresh 1,000 square feet of kitchen space and refrigeration in the basement beneath its stall, but there are no bar tools up top. Its solution was prebottling signature juices. But selling drinks out of a refrigerator case makes it hard not only to grab guests’ attention, but “to ensure they understand what they’re getting and keep them coming back,” says owner Shom Chowdhury.

As such, each juice is a headliner for various drink categories—like the “green” spinach-kale-ginger and “indulgent” almond-cacao nib. Customers not taking their beverage to go get it in a Mason jar, to further “glamify” the experience, he says.

The Fat Shallot, too, focuses on how it displays its drinks. While cocktails are served in plastic cups, one is displayed on the counter in an old-fashioned bubbler. The glass lines up with the rest of the stall’s vibe and serves as a conversation piece to get guests asking about the cocktail.

Also in Revival, sandwich spot Danke gave up some coveted counter space for a warmer to house a winter-season mulled wine. Danke makes these spatial adjustments in part through some creative rearranging. For example, a beverage cooler that slides through a hole in the wall separating the back of house doubles as a workspace for the kitchen.

Danke also opted to stock glassware for a full-service bar feel, despite the volume of to-go customers. “It should be one more incentive to sit at our [counter] for drinks, lunch and dinner,” says General Manager Tegan Brace.