The management of BJ’s Restaurants often uses descriptors like “premium” and “polished” to peg the casual-dining echelon it’s claimed as a niche.  Now the co-founders of the high-flying brand are giving a similar upscale nudge to their new entrant in the fast-casual market, a spec-your-own concept called Stacked. 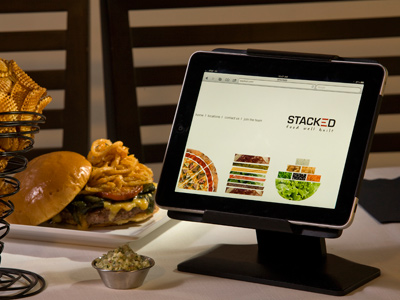 Using tabletop iPads, guests will be invited to custom-build one of Stacked’s specialties, which include burgers, pizzas, salads and sausage sandwiches. If their inner chef is mute that day, they can scout the off-the-shelf choices, using the device’s graphics and touch-screen interface.

Paul Motenko and Jerry Hennessy, who stepped out of BJ’s day-to-day operations several years ago, say they’ll use foods of full-service quality. Among the bread options, for instance, will be a brioche bun, and condiments will include a sundried tomato aioli.

Orders placed via the iPad will be delivered to the table, bypassing the fast-casual signature of having patrons queue up at a counter.

“Stacked defies existing categories and will elevate fast-casual dining to a new experience that we are calling ‘fast-casual plus,’” Motenko said in the announcement of the venture.

Menu prices were not disclosed.

The 160-seat, 6,300-sq.-ft. prototype is slated to open in May in Torrance, Calif.  Motenko and Hennessy say they have two additional locations already lined up.