Start a seafood lover talking about fish and invariably the conversation will alight on some seminal experience in his or her life that started the whole affair. For a close friend of mine who is a marine biologist, it was the Jersey Shore in the early seventies (when the Beatles’ “Octopus’s Garden” played often on the radio). For him, Cape May still has a magic all its own. 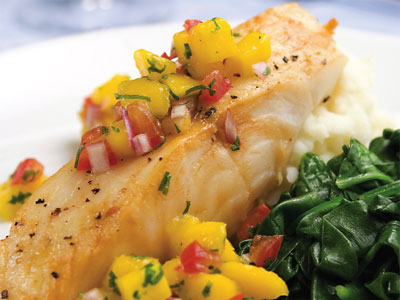 It’s quite a sight to see a grown biologist light up recalling one summer as a young squirt when he snagged the biggest weakfish aboard a party boat—though his grin dims when he explains that in his lifetime, populations of this popular fish have dropped to a fraction of their past abundance and toxin levels have risen to the point of concern. Despite these worries, the spark that ignited him then burns as brightly today, just as it does for many of us who are chefs—that passion for being connected with our foods.

What complicates my role as a seafood instructor is not just that popular fish species have dwindled in number, but that few students today have firsthand familiarity with where, how and when their finfish and shellfish are caught or harvested. This makes a confusing topic even more confounding. I want to share with you a bit about what I believe to be wrong with sustainable fisheries, one small idea on how to set things right and what part you can play.

Among the biggest problems confronting sustainable fisheries is the term “sustainable”—because it isn’t. The concept is laudable, and most often described in terms defined by the Brundtland Commission of the United Nations back in 1987 as “meet[ing] the needs of the present without compromising the ability of future generations to meet their own needs.” That’s where agreement ends and advocacy begins.

If you’ve been confused about what to buy and what to avoid, you’re in good company. Over the past several years, Professor Cathy Roheim, Ph.D., of the University of Rhode Island has authored numerous comparisons of the conflicting recommendations made by various interest groups. Most recently, journalist Nic Fleming affirmed in The New Scientist that advice about purchasing seafood continues to be inconsistent and is at times outright misleading.

Admittedly, it’s not an easy issue—fisheries science is still a young discipline. Quoted about as often as the Brundtland definition is the adage that “managing fisheries is more about managing people than it is fish.” Enter chefs. We play an influential role in the interplay between people and what they eat.

Because chefs and the public have been bombarded with conflicting messages and assertions about seafood sustainability, I’ve included some of the best Web resources on the subject (see "Helpful links" below). Few are better poised than we are to take responsibility for shutting out the deafening clamor of conflicting rhetoric and instead reflecting on the intersection between our respect for food and our customers’ desires.

Meanwhile, I want to suggest the radical idea of serving up invasive aquatic species—that’s right, those critters that escape from home aquariums, stow away in the ballast of ships or cling to the underside of muck boots. Some of these transplants, which may have no natural predators in their new neighborhoods, are overtaking native fish and shellfish populations with devastating consequences. A few that have invaded our country include Asian swamp eels, Chinese mitten crabs, clubbed tunicate, flathead catfish, Northern snakehead, New Zealand mud snail, rusty crayfish, spiny water flea, veined Rapa whelk and, of course, the famed Zebra mussel. Boil ’em, mash ’em, stick ’em in a stew! And along the way, let’s rename these beasts to sound more appetizing—the way Patagonian toothfish is now marketed as Chilean sea bass.

In California, the Santa Monica Seafood Company is indeed exploring this option. The large seafood wholesaler is curious about the Indo-Pacific red lionfish that were released by a Florida hobbyist and have subsequently established themselves along the East Coast. “They are ravenous predators, so hunting and eating them is one way to bring them under control,” says Logan Kock, VP of purchasing and responsible sourcing and a marine biologist. Kock and his company are also capturing and selling the villainous Chesapeake ray. “Humans have killed the ray’s natural predator: sharks,” he says. “So the ray flourishes as it devours the oysters and clams on which the Chesapeake depends for water filtration. Runoff in the Bay has made the need for water-filtering shellfish even more critical. Let’s take over for the shark and eat the ray.”

Modeling the success of community-supported agriculture (CSA), where people buy, subscription-style, a season’s worth of produce from local growers, community supported fisheries (CSFs) are sprouting up. Fishermen can earn more for their catch by selling directly to consumers than to wholesalers and people benefit by introducing healthy fish into their weekly diets. While some fishermen continue to sell seafood at farmers’ markets, advance CSF purchases allow them some level of insurance. This is a good example of economic and social sustainability at work. Examples include the Cape Ann Fresh Catch CSF in Massachusetts and in Maine, the Midcoast Fishermen’s Cooperative of Port Clyde.

Getting and giving an education

It’s easier for chefs who live along our country’s coasts to purchase directly from fishermen. Chef Andrew Spurgin, co-founder of Passionfish, an educational ocean and seafood sustainability nonprofit, recently formed the Cooks Confab. The “confab” purchases seafood from local fishermen and together they host educational food events. Likewise, over the past decade the Passionfish team has convened educational forums, cooking demos and dinner events, including the annual Poisson d’Avril (April Fish Day) held at the CIA in Hyde Park. Members of the public, culinary students and seafood industry representatives participate in engaging and diverse forums. Another recent event took place in San Diego, co-organized with the Cooks Confab and Hotel del Coronado. It was followed by a seafood dinner reception hosted by 1500 Ocean. Forum transcripts and a blog are available on the Passionfish Web site.

Given that 67 percent of seafood in the U.S. is consumed in restaurants, chefs have a unique opportunity to make a difference. With some homework, you can have your (crab)cake and eat it too. And oh, by the way, the clutter of crab shells and debris outside the entrance to an octopus’s den is its “garden!”

Someday there will be a definitive guide, but that day isn’t today. So here is an assortment of resources to whet your appetite:

Food and Agriculture Organization of the United Nations
www.fao.org/fishery