Two years ago Chipotle saw a marketing opportunity in the mainstreaming of issues surrounding sustainability, animal welfare and, generally, where food came from, all issues the chain was founded on. This opportunity, however, brought with it a unique challenge: to tout Chipotle’s commitment to sustainability, family farming and animal welfare, it had to first help educate the public that there was a problem these programs were helping to fix. In effect, the chain had to first market the negative impacts of factory farming for people to understand the full impact of their own positive solutions. “We’ve always believed that if people discover where their food comes from, the more they’ll appreciate what we do at Chipotle,” CEO Steve Ells recently told investors. 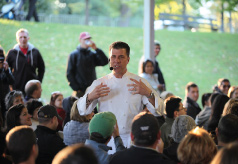 To do this Chipotle put together an array of non-traditional marketing tools, tactics very new to the restaurant industry, or any service industry for that matter.

Cultivate Festival
This one-day festival held in Chicago October 1 featured bands, films, chefs and farmers. The music brought people in, the food promoted the sustainable, family-farming message, while films depicting factory farming and a hog “gestation crate” that people could crawl inside got across the negatives. Capacity at the venue was 12,000; 16,000 attended.

Cultivate Foundation
Chipotle’s philanthropic efforts have been locally focused, supporting local farmers markets, school programs, community groups and the like. With the Cultivate Foundation, the chain set out to do larger-scale philanthropy, all focused on educating the public about the problems of factory farming and offering grants to farmers and others involved in developing solutions. It has given $1 million to Jamie Oliver’s Food Revolution campaign, for instance.

“Back to the Start”
The Cultivate Foundation produced a two-minute stop-motion animation video, telling the story of a family farmer who turns into a factory farmer and then returns to his roots, while Willie Nelson’s cover of the Coldplay song “The Scientist” plays. The video played at the Cultivate Festival and on movie screens nationwide and has received over 2 million views on YouTube. Sixty cents of every download from iTunes goes to the foundation.

iPhone games
Still in the development phase, the company plans to roll out at least one iPhone game in the near future. According to spokesperson Chris Arnold, players will navigate a pig through a maze, trying to keep it from being confined in a factory farm and from getting antibiotic injections. The company would not say when its planned launch date is.