Thousands of fast-food workers and their supporters beat drums, blew whistles and chanted slogans Thursday on picket lines in dozens of U.S. cities, marking the largest protest yet in their quest for higher wages. The nationwide day of demonstrations came after similar actions organized by unions and community groups over the past several months, reported the Associated Press. 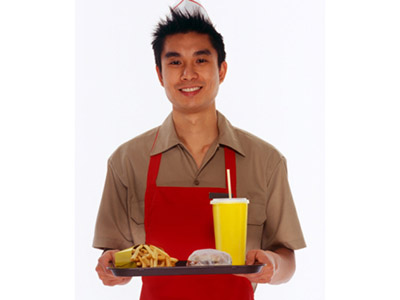 Workers are calling for the right to unionize without interference from employers and for pay of $15 an hour. That's more than double the federal minimum wage of $7.25 an hour, or $15,000 a year for full-time employees.

But the turnout varied significantly, said the report, with some targeted restaurants seemingly operating normally and others temporarily unable to do business because they had too few employees.

Jobs in low-wage industries have led the economic recovery. Advocates for a higher minimum wage say that makes it crucial that the jobs pay enough for workers who support families.

The restaurant industry says it already operates on thin margins and insists that sharply higher wages would lead to steeper prices for customers and fewer opportunities for job seekers.

The drive for better pay comes as the White House, some members of Congress and economists seek to raise the federal minimum wage. But most proposals are for a more modest increase, with President Barack Obama suggesting $9 an hour.

The Service Employees International Union (SEIU), which represents more than two million workers in health care, janitorial and other industries, has been providing financial support and training for local organizers in the fast-food strikes around the country.

Convenience store retailers seem relatively unconcerned about the strikes. Nearly 90% of the respondents to a CSP Daily News poll that asked, "Are you concerned your employees will take part in the minimum-wage strike on Aug. 29?" said no. In response to a second poll that asked, "Would your business survive if the national minimum wage was increased to $15 an hour," 60% said no; 23% said yes and 16% said they were not sure.

In New York, City Council Speaker Christine Quinn joined about 300 to 400 workers and supporters Thursday in a march before the group flooded into a McDonald's near the Empire State Building. Shortly after the demonstration, however, the restaurant seemed to be operating normally, and a few customers said they hadn't heard of the movement. The same was true at a McDonald's a few blocks away.

The lack of public awareness illustrates the challenge workers face in building wider support, said the report. Workers participating in the strikes still represent a tiny fraction of the industry.

At a Wendy's in New York City, about 150 workers and supporters stood outside chanting, "We can't survive on $7.25." There were no customers inside.

In Detroit, the dining area of a McDonald's on the city's northwest side was shut down as workers and others protested outside.

In Raleigh, N.C., about 30 fast-food workers picketed outside a Little Caesars.

A few dozen people gathered along the street outside a McDonald's in Las Vegas, chanting and carrying signs that read "Strike for a living wage" and "Huelga por $15," Spanish for "Strike for $15." But an employee at the restaurants said it stayed open for business throughout the demonstration.

In Seattle, dozens of people gathered outside a Subway to chant for a $15 minimum wage. Workers inside said they stayed open during the demonstration, and customers were still able to buy sandwiches.

The latest protests follow a series of strikes that began last November in New York City. The biggest effort so far was over the summer when about 2,200 of the country's millions of fast-food workers staged a one-day strike in seven cities.

McDonald's Corp. and Burger King Worldwide Inc. say they don't make decisions about pay for the independent franchisees that operate the majority of their U.S. restaurants. At restaurants that McDonald's owns, the company said, any move to raise entry-level pay would raise overall costs and lead to higher menu prices.
It said that McDonald's provides professional development for interested employees and that the protests don't give an accurate picture of what it means to work at McDonald's.

"We respect our employees' rights to voice their opinions. Employees who participate in these activities and return to work are welcomed back and scheduled to work their regular shifts as usual," the company said in an emailed statement.

Wendy's said in statement that it was "proud to provide a place where thousands of people, who come to us asking for a job, can enter the workforce at a starting wage, gain skills and advance with us or move on to something else."

Starbucks spokesperson Zack Huston said the strikes have not affected the company's stores. He noted that Starbucks workers earn "competitive wages" and affordable health care that other retailers do not provide for part-time workers.

Subway and Yum Brands Inc., which owns KFC, Taco Bell and Pizza Hut, did not respond to requests for comment.

Even though they're not part of unions, fast-food workers who take part in strikes are generally protected from being fired or having employers retaliate against them.

Federal labor law gives all workers the right to engage in "protected concerted activities" to complain about wages, working conditions or other terms of employment.

"It's always been understood that people who fall under this concerted activity umbrella are protected as long as they are protesting not only on their own behalf but on behalf of others as well," Robert Kaiser, a St. Louis labor law attorney, told AP.

In a statement, the International Franchise Association (IFA) said that the franchise industry, and the jobs created every day, would be at risk with an unrealistic $15 an hour minimum wage.

"Mandating increased wages would lead to higher prices for consumers, lower foot traffic and sales for franchise owners, and ultimately, lost jobs and opportunities for employees to become managers or franchise owners," president and CEO Steve Caldeira said. "The franchise industry is a proven job creator and career builder, yet efforts to double the minimum wage to $15 would clearly jeopardize opportunities for existing and prospective employees."

"Many franchises have developed successful programs designed to help employees rise from entry level to management and ultimately, ownership," Caldeira added. "Arbitrarily mandating a higher minimum wage will only reduce the amount of entry level jobs that workers need to gain the skills to move up the employment ladder."

He added, "This campaign is also designed to pressure employees into organizing, generating much-needed headlines and revenue for labor unions who have faced a sharp decline in private-sector membership for years."

National Retail Federation (NRF) senior vice president Bill Thorne said in a statement about the strike: "Today's effort by a number of union front groups is yet more theater orchestrated by organized labor, for organized labor," "The law is clear: if employees want to unionize, they can. But they are not, so unions are paying high-priced public relations firms and work centers to conduct disruptive labor activities, which would be otherwise prohibited if organized by unions themselves."

He added, "Retail and restaurant jobs are good jobs, held by millions of working men and women, who are proud of what they do for their customers and the communities they serve across America. The planned walkout is the result of a multi-year effort by big labor to diminish and disparage these hard-working Americans by attacking the companies they work for.

"It is not in the best interest of any business to spend money to recruit, train and then penalize employees. Retail and restaurant companies pay competitive wages and many offer additional benefits. Likewise, a large number of managers in these same companies started as part time or hourly employees themselves.

"Today's publicity stunt is just further proof that the labor movement is not only facing depleted membership rolls, they have abdicated their role in an honest and rational discussion about the American workforce."