Reports of the death of fine dining in America have been greatly exaggerated. Sure, the Great Recession landed the segment on life support. It hurt all restaurants, of course, but especially upscale concepts. According to NPD Group, traffic at fine-dining establishments fell by 10, 12, 15 and 16 percent across the four quarters of 2009, respectively. 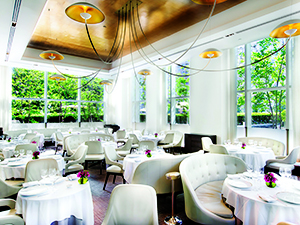 However, as Restaurant Business’ Top 100 Independents ranking shows, fine dining did not die. How upscale independent restaurants survived is as notable as the fact that they endured all. The category emerged from the ashes of the downturn by fundamentally remaking and rethinking its identity and its experience. While the high-end prices still remain at many of the restaurants on the independents list, the high-end attitude is gone. Humbled by the days when fewer people wanted a table, fine dining is more egalitarian and accessible.

“The notion of fine dining simply had to change,” says Eric Weiss, president of New York City’s Service Arts consultancy. “The number of restaurants that have eliminated tablecloths is huge. But it’s not about saving on laundry, it’s about diners’ negative perceptions of what tablecloths signal about the dining experience.”

Kimpton Hotels & Restaurants, which operates 70 dining spots in 27 cities, closed The Fifth Floor in San Francisco after 15 years of a Michelin-star reputation for elegant dining. In its place, Kimpton created something more in line with current consumer expectations. “We recently reopened it as The Dirty Habit,” says James Lin, Kimpton senior vice president of restaurants and bars. “It’s more barcentric but still with high culinary credibility. We transformed the space. We opened it up so there’s a rooftop-patio space. It’s a unique place with great cocktails, an edgier vibe and the food works for dinner or for social dining.”

Craft cocktails, comfortable seats and uncomplicated tables are what diners want now. “You don’t want to commit to a six-course, fixed-price meal for $175-plus per person. People want a place where they can come in and [have] a glass of wine, a couple of small plates and still have a great experience in a wonderful atmosphere,” Lin says. “The trend in terms of the experience consumers are looking for is definitely toward approachability.”

Richard Coraine, senior managing partner at Union Square Hospitality Group, says upscale dining has been redefined not by economic conditions or consumer demand but by the push-pull of both. “I’m seeing a lot of simple design, design without a lot of the trappings that you might have had in the past. There’s not a lot of ‘stuff’ happening inside restaurants these days because you can’t afford to do it. You’re paying a lot for your lease and a lot to build it out, and you have to recoup your money somehow, so you just can’t afford to do [haute design] anymore.”

He points to Union Square’s North End Grill in New York City, with a sleek but unfussy interior, as an example of what has changed. “You’re seeing a lot more what I’d call ‘unplugged’ designs, which are great, warm, affordable and efficient so we can put the money into product and people,” he says.

Michael Bauer, who reviews restaurants for the San Francisco Chronicle, sees that trend beginning in 2009 and 2010 “because it was the introduction of the more casual menu, a lot of cocktails and the blurring of the lines between a bar and a restaurant. That has continued,” he says. “The menus have become short. They could easily be served at a bar. We used to think luxury was linen, china and a womblike environment with curtains and such. Now everything’s open to the street. No place has tablecloths. It’s a different way of defining luxury and refinement.”

Peter Guzy, partner in New York City design firm AsfourGuzy, believes design changes have followed a “real shift away from what had been the traditional structure of a meal. The appetizer, entree, dessert, mixed drink, bottle of wine-set table was traditional. There’s been an intentional movement away from that.”

What restaurateurs have moved to has been more of a brasserie model, he says. “You could use a brasserie for a coffee, a snack, a drink or a meal. Whatever you needed,” Guzy says. “That flexibility allows chefs to stay open more and try to take advantage of the expanding clientele. On the design side, that same concept is reflected in a less formal environment and experience. New white-tablecloth restaurants are fairly rare these days.”

The brasserie era has heralded greater emphasis not only on quality but specifically on artisanal, handcrafted quality. “You’re seeing the chef as chef, not chef as entrepreneur,” says Coraine. “You’re doing a lot of hands-on things because, if your space is small, you can’t afford a lot of management labor. [Chef-owners are] always doing things themselves; they’re always in the dining room; they’re buying the wine themselves. That’s a very positive development.”

The value of the Top 100 Independents ranking is not only that it reveals how fine dining has survived, but also that it points the directions in which the category continues to evolve. Together, these 100 disparate independent restaurants reaffirm the vitality and resilience of dining in America.