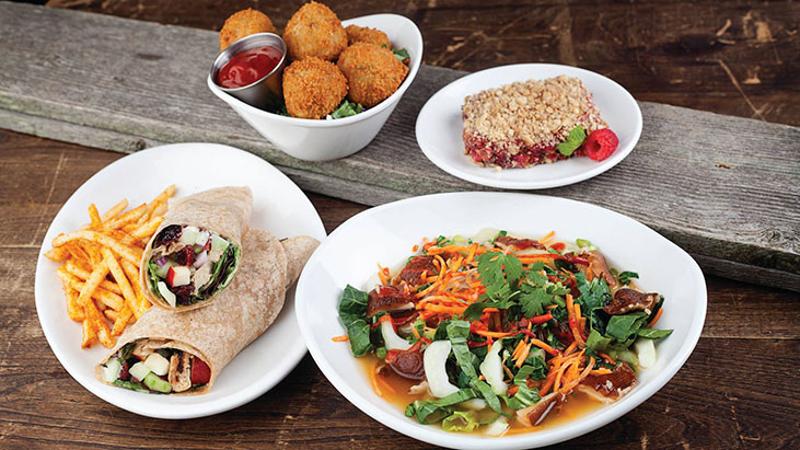 Despite consumer interest in healthful fare, some health-focused fast casuals are closing units. Nearly 60% of consumers place a large importance on fast casuals offering healthy options, according to research from Winsight’s sister company Technomic. But healthful fast-casual chains like Native Foods Cafe, LYFE Kitchen and Garbanzo Mediterranean Fresh have had to shutter multiple restaurants due to underperforming sales.

“The reaction to health-focused brands has been stronger than the increase in demand for health-related foods,” says Technomic President Darren Tristano.

The first vegan concept to crack Technomic’s ranking of the Top 500 restaurant chains by U.S. sales, Chicago-based Native Foods Cafe, appeared to be on a strong growth trajectory. Year-over-year sales for 2014, when Native Foods entered the Top 500, were up 36%, and the chain was operating 25 locations. But growth began to slow thereafter, with year-over-year sales for 2015 up by 12%, a third of the previous year’s growth rate. Over the last year, Native Foods closed at least eight units, including two of its three Los Angeles-area sites, an express prototype in Chicago, a couple Denver locations and all its Washington, D.C., units.

When it left D.C., Native Foods management saidit was re-evaluating the concept to make it “more relevant for today’s world.” The chain has yet to announce changes to its concept, and requests for comment from Native Foods weren’t returned.

Instead of tinkering with its positioning, Native Foods could bring back customers by lowering prices, says Tristano. When it comes to health-focused brands, the chain's food costs “tend to be higher, so they serve a much narrower, affluent consumer [base],” he says. Technomic estimates a check average for Native Foods at $12.50, higher than similar brands like vegan chain Veggie Grill ($11.80), health-conscious Freshii ($11.15) and salad concept Sweetgreen ($11.10).

LYFE Kitchen is another health-focused concept that has slowed growth. The brand received a lot of press when it launched in 2011, thanks to a menu of under-600-calorie options devised by Art Smith, a former personal chef to Oprah, and a strong executive team that included former McDonald’s president Mike Roberts and former McDonald’s chief of communications Mike Donahue. Initial expansion goals called for hundreds of units over the next several years, but after five years in operation, the chain operates just a fraction of that.

LYFE Kitchen currently has 14 locations after closing four Los Angeles-area locations, a Dallas site and its only New York City outpost in the last year. The concept did not return requests for comment.

But while it’s closed units in some markets, LYFE has enjoyed expansion in other areas, particularly in Chicago and Memphis, Tenn., where it moved its headquarters in 2015 following an investment from Memphis-based Carlisle Corp. That growth has allowed LYFE Kitchen to make up for other losses; year-over-year sales for 2015 were up by 58%, according to Technomic estimates.

LYFE Kitchen has an estimated check average of $13.95, over a dollar more than Native Foods.

Health-focused concepts “are not cheap to run,” Tristano says, which makes them a “higher risk.” However, in regard to LYFE Kitchen, Tristano also says that LYFE’s strong executive team allows the concept to take these risks. “If you’re ahead of the trend, you’re very often going to see failure,” Tristano says. “And they’re not going to over-invest in areas they’re underperforming.”

Denver-based Garbanzo Mediterranean Fresh, formerly Garbanzo Mediterranean Grill, has also closed units. Since launching in 2007, the chain expanded steadily in Colorado and to other states like Texas and Arizona by promoting nutrient-rich Mediterranean fare. But the brand experienced its first year-over-year sales decrease in 2015 (according to Technomic estimates) after closing units in California, Maryland and New Jersey.

Over the last 18 to 24 months, Garbanzo has paused expansion efforts to focus on concept development. The chain dropped “Grill” from its name in 2015 and rebranded to Garbanzo Mediterranean Fresh.

“The word ‘fresh’ is a little overplayed … but I still think there’s a value propositioning there that’s critically important,” says Garbanzo CEO James Park. That aligns with consumer data from Technomic, which found that more than three in four consumers say freshness is key to creating a good value.

To emphasize freshness, Park says Garbanzo has been moving toward the use of cleaner ingredients by removing preservatives and artificial coloring. The chain is also testing a proprietary protein-rich pasta option and is developing a new restaurant design.

Garbanzo is also ready to ramp up expansion again. The chain plans to grow in existing markets, including its home base of Denver, where Park says franchisees are reporting strong sales thanks to the market’s health-conscious consumers.

But Park says he welcomes the competition.

“Competition is inevitable,” he says, “and the fact that other players are going into the space is good for us.”

“If someone is accustomed to eating a certain way, and they try something healthier at Domino’s, like these salads, they may want to try something like that at Garbanzo,” Park says.