The Figure Drawing course I took in college hardly qualifies me to be an art critic. (Full disclosure: My enrollment in that class may have been more about shouldering up to a cute guy and earning some “easy credits” than a genuine love of the arts.) But one doesn’t need a fine arts degree to appreciate the power of Natalie Sept’s paintings. 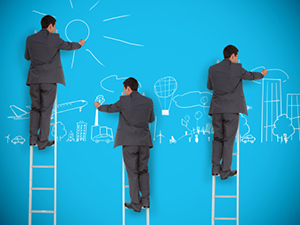 The 10 portraits that make up the Portland, Ore. artist’s “Dishwasher Project” (you can see one of them in this issue on Page 27) are about far more than perfectly rendering the subjects’ eyes or smiles or poses. They are about capturing their stories, their pride, their dreams and their value to the restaurants in which they work. The paintings are meant to bring to the forefront the people who toil away in the back of the house and lend untold (and often unsung) contributions to the industry.

Sept calls her collection “an intimate portrayal and tribute to the men and women behind the illustrious Portland food scene.” Her works are grand and mural-like, some 6 by 4 feet in scale. “I wanted them to be monumental, because the dishwashers are almost never seen,” she says. “I wanted it to be as if you walked into the kitchen and locked eyes with this person and understood their history and narrative and saw the pride they have in their work.”

It’s pride that comes out not only on canvas but in interviews that Sept and her partner in the project, Israel Bayer, conducted with the workers. It comes through in answers from Efrain: “I have a unique work ethic. I like to walk into a place and find it clean and leave it cleaner.” And Rudi: “I always think about having my own restaurant one day ... I want to invest in my family’s future.” And Maestro: “Dishwashers are a complement to the kitchen. Sometimes people don’t see the job as very important, but it’s part of the whole operation. Without a dishwasher there’s no kitchen. It’s a stepping stone to bigger and better things.”

The collection’s run this summer was limited to the Portland area, including an exhibit inside a local eatery (where one of the subjects worked) and a one-night showing at an event space inside a Portland hotel. But the well-praised art speaks to the larger reality of invisible workers across the U.S., in dish pits inside countless restaurants that earn awards, stars, accolades and fame for their more-visible owners, chefs and sommeliers.

It’s fitting that Sept’s work kicks off our feature on immigration reform. Not all of her subjects are immigrants (though it’s notable that so many are), but the world they occupy for so many hours a day is home to a disproportionate share of the industry’s immigrant workforce. Some 22 percent of restaurant workers are foreign-born, our story reports, many in low-skill, low-wage jobs as cooks and dishwashers; 28 percent of these workers are undocumented.

On the floor of the Capitol, in the halls of state legislature buildings and in the C-suites of many companies, talk of immigration reform often is a numbers game. Political views aside, most agree that legislation that includes a roadmap to citizenship for immigrants already in the U.S. is good for business.

But Sept’s works remind us of what many operators know first hand: it’s more than that. Many of the restaurateurs we talk to on a daily basis describe their employees as “family.” So it’s more than just a blow to the business when fear over the reach of conflicting state immigration laws or crackdowns on paperwork employers collect to prove their staff is able to work legally in this country causes these valuable immigrant workers to lose (or leave) their jobs. It takes a toll on the families—of all kinds.