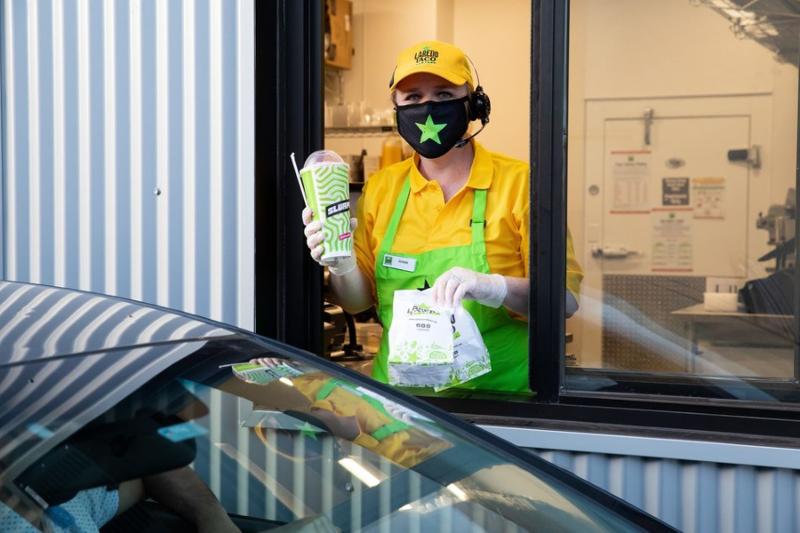 Looking to pull more customers away from quick-service restaurants (QSRs), the 7-Eleven convenience-store chain has opened its first store with a drive-thru for the chain’s foodservice brand Laredo Taco Co.

In addition to the tacos and other Mexican specialties that have made Laredo a cult favorite in the chain’s Texas stronghold, the lane will enable customers to buy Slurpees, coffees and other signature 7-Eleven beverages without leaving their cars.

The Laredo restaurant is essentially co-branded with the 7-Eleven hosting it. Its opening reflects a number of trends unfolding in the c-store channel, which has been nibbling at the customer base of traditional QSRs for decades.

That challenge is particularly evident at breakfast. At the new 7-Eleven store, the Laredo drive-thru will feature breakfast tacos made with freshly cracked eggs, along with cappuccinos, lattes and other espresso-based hot and cold drinks. The drive-thru will open at 5 a.m. to accommodate convenience-seekers, 7-Eleven said.

The unit also features indoor seating for patrons who want to dine in. The restaurant portion features beer, wine and on-tap wine-based margaritas.

“7-Eleven is known as a beverage destination, and Laredo Taco Co. makes some of the best quick-serve Mexican food anywhere,” Chris Tanco, 7–Eleven’s chief operating officer, said in a statement.  “Throw in the convenience of grabbing a taco paired with a Slurpee drink through a drive-thru, and it's a match made in heaven."

The location, in Dallas, Texas, is the sixth of what 7-Eleven calls its Evolution stores, each abounding in features that could become standard in future units of the nation’s largest c-store chain. Each is different from the other Evolution stores as well as the rest of the 7-Eleven chain. At least several feature one of 7-Eleven’s proprietary foodservice concepts. The new Dallas unit is the first to feature a drive-thru.

7-Eleven isn’t the only c-store chain experimenting with drive-thrus, a signature feature of the QSR market.  Wawa, a regional competitor, is trying double-drive-thrus at some of its c-stores, and recently opened a drive-thru-only store. Dovetailing with those experiments, the chain recently added a ready-to-eat burger and plans to follow with more selections aimed at boosting dinner sales.

Laredo Taco Co. is by far 7-Eleven’s largest restaurant venture to date, with more than 500 units operated by the chain and rights to potentially another 200-plus locations held by another c-store company, Cal’s Convenience.

7-Eleven acquired the brand through a complicated $3.3 billion deal in 2018 with Sunoco. As part of that multifaceted transaction, 7-Eleven acquired about 1,000 units of Stripes, a regional c-store chain whose units often featured a Laredo station. Cal’s Convenience acquired rights to operate about 207 Stripes units as part of the arrangement, and each of those branches can sport a Laredo outlet.

7-Eleven operates, franchises or licenses about 12,000 c-stores in North America.