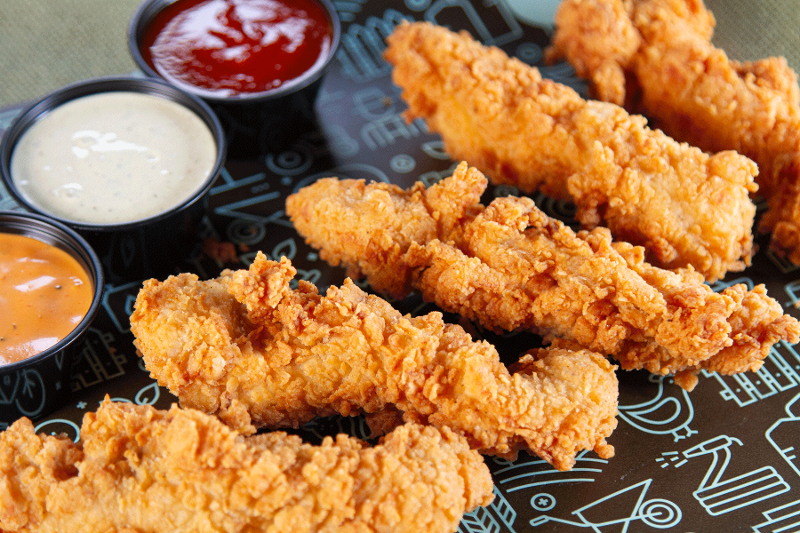 The company that operates the Beef ‘O’ Brady’s and The Brass Tap casual-dining chains is adding a third franchise concept to its fold, a limited-service chicken venture called The Hatchery.

Three years in the making, The Hatchery will feature chicken sandwiches, wings, tenders, nuggets and salads, along with an extensive array of beverages intended to accommodate to-go sales and foster off-peak business from patrons looking to take a break with a liquid refresher. Included are hand-squeezed lemonades, fruit-infused drinks, sweet and unsweetened iced tea, milkshakes, beer and wine.

The Hatchery is an exception to the current trend of casual chains adding virtual restaurants—essentially brands invented to capture delivery sales—to cash in on the strong sales chicken concepts have been enjoying. The Hatchery began as a ghost kitchen venture, an operation whose products were only available for delivery from a  third-party kitchen. Its parent, FSC Franchise Co., opted to go into brick and mortar to capture takeout and on-premise sales as well as delivery. Also, drinks were not offered in the ghost version.

The 2,400-square-foot prototype, slated to open in Tampa, Fla., on Monday, features 72 seats, counter service and a kiosk where customers can place their own orders.

The initial unit does not feature a drive-thru because of its lot’s configuration, but the back-of-house was designed to accommodate one, and subsequent locations could include that sales channel, said Chris Elliott, CEO of Beef ‘O’ Brady’s, The Brass Tap and now The Hatchery. Still, the expectation is that the prototype will handle a large volume of orders for off-premise consumption, he adds.

During the new concept’s eight-week run as a ghost brand, checks averaged $9.12, without the inclusion of a beverage.

Elliott describes the venture as “fast-casual leaning” in its menu, food quality and operations, but noted that his team will monitor the venture to see if it should evolve as more of a traditional quick-service restaurant.  He also acknowledged that the concept could work as a virtual restaurant or a ghost-kitchen venture, but said that’s not a current part of the plan.

Long before the world had heard of COVID-19, FSC was looking for another franchise brand to add to its fold. It focused on developing ventures internally while keeping its eyes open for acquisitions.

“It just turned out that one of the brands we’d developed in-house was ready to go before we bought anything,” Elliott said.

The pandemic had delayed the debut of the concept, which was already under construction for an April debut. With a lease in effect and the building ready, FSC opted to proceed with the opening.

FSC decided on a chicken concept after studying what brands led the industry’s chain growth. “Turns out four of the 10 fastest-growing chains were chicken concepts: Chick-fil-A, Wingstop, Zaxby’s and Raising Cane’s,” says Elliott. “All of those specializing in one type of chicken product. We decided to do all of them.” He also noted that the team spent considerable time on the development of The Hatchery’s drink menu.

FSC also wanted to stress quality and freshness. The underline to The Hatchery’s logo reads, “Chicken made from scratch,” and the concept’s website stresses that the brand features “100% all-natural, hormone-free, all-white meat chicken.”

With a footprint small enough to work for end-cap or in-line locations, The Hatchery would likely be feasible for small and medium-sized towns that lack the population to support a Chick-fil-A or one of those other brands, Elliott said. The same strategy had figured into Beef ‘O’ Brady’s expansion, he added.

Franchisees of Beef ‘O’ Brady’s and The Brass Tap have been invited to a VIP luncheon to preview The Hatchery and assess it as a possible new growth vehicle, Elliott said.