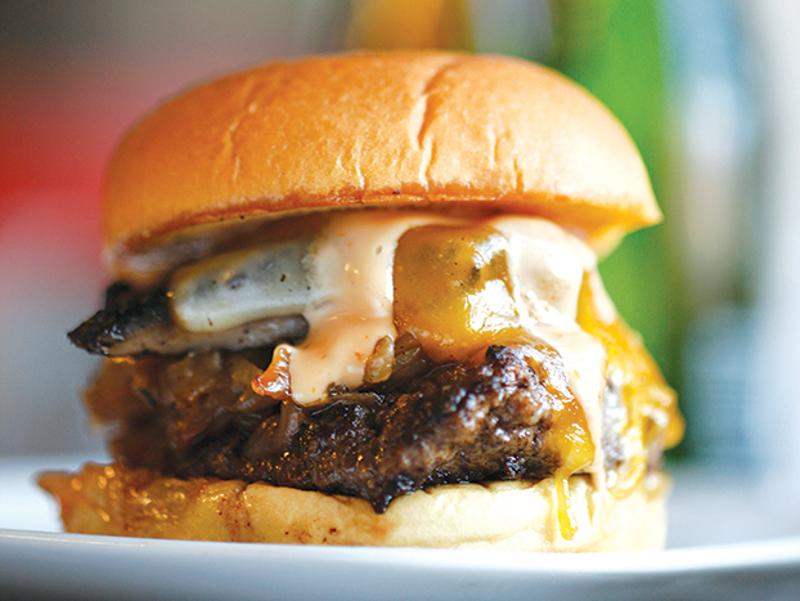 This isn’t your average dining guide. In fact, it’s not a dining guide at all. This special iteration of Concepts to Scout—our second annual roundup—singles out the destinations restaurateurs visiting Chicago for the National Restaurant Association Show in May should scope out. Sure, you’ll find a good meal at any one of these new spots, but more importantly, you’ll find ideas and inspiration for what resonates with consumers now.

Where to network over a cocktail

Other concepts by Longman & Eagle owners

Others not to miss

...because who cares what's hot if it doesn't sell

A three-month renovation resulted in an expanded 26-seat bar and sleek, black-and-white dining room which opened in March in a landmark off Michigan Avenue. The goal of the reconcepting: Attracting millennials. In addition to expanding the bar and adding local spirits, the polished-casual hotel restaurant changed its menu to feature small plates along with larger entrees to appeal to younger diners who are keen on shareables and seasonal bar bites.

This fast-casual chicken concept from Element Collective (Nellcote, Old Town Social, Kinmont) opened a second outpost in the River North area last winter. The new shop, situated near many offices, expanded on the menu of fried-chicken sandwiches by adding breakfast fare. The daily-butchered chicken items start selling at 7 a.m. on weekdays in the form of breakfast sandwiches, with eggs, ham and housemade biscuits. Now that the weather is creeping above freezing, expect customers to line up starting early in the day.

Before his tragic passing, chef Homaro Cantu opened Berrista, his futuristic answer to the wave of high-tech coffee shops, located in Irving Park. With the goal of making food better for you, the menu features carbonated fruit as a sweet snack and sodas, pastries, waffles and more sweetened with the taste-altering Miracle Berry instead of sugar, in addition to coffee brewed in an automated machine custom built for Berrista. The new-age system was selected specifically by Cantu to add some show behind the counter

Where to network over a cocktail

...because why not be a sleuth as you sip?

While Pops for Champagne is a tourist trap, the owner opened a whiskey lounge in the basement below for in-the-know imbibers. Though it shares an entrance with the Champagne spot, it really is the antithesis of Pops, with wooden tables, large booths and a speakeasy vibe. It thinks of its servers and bartenders as “hosts for the night,” focusing on a more homey, comfortable service.

Headquarters’ River North spot attempts to merge millennial wants with a sense of nostalgia. For example, to encourage guests to put down their phones, it has a free recharging station built in an old card catalogue.

Located inside the Acme Hotel, the lounge offers craft cocktails and bar snacks. Look for the $14 “Dealer’s Choice,” offering bartenders freedom to get creative and guests spontaneity to go off-menu. Customers choose their spirit, profile (spicy, smoky, etc.) and glassware, and let the bartender craft something for them.

If you’re waiting for a table at The Publican, head next door to this retro cocktail bar clad with 1960s memorabilia. While most bars have high-top tables, The Betty makes a comfortable gathering place with upholstered armchairs set in conversational groupings.

...because you have to see where every Chicago restaurateur is clamoring to be.

As many operators focus on paring down their menus, this latest entry from Boka Restaurant Group features more than 87 menu items. The Japanese fare goes beyond sushi, nixing veto votes. Guests can mix and match sushi, hibachi dishes, robata skewers and more. If you can’t score a reservation, head to its lounge for cocktails and snacks or to the basement izakaya for late-night drinks and bites.

If you need a quick meal between the show and nightly events, Cemitas Puebla is an inexpensive option on the mostly sit-down Restaurant Row. The new location makes the buzzed-about sandwiches easier to get to from McCormick. One thing to note: The original location has a hole-in-the-wall feel; this design had to be upgraded to fit its new home with a different audience.

Formento’s kicks old-world Italian-American up a notch with refined cooking and polished service. The menu features dishes Tony Soprano would love—chicken Parmesan, clams casino and shrimp scampi—at prices that mostly don’t top $30. The wine list also is reasonable, with many $10 by-the-glass options. Its ambiance is part of the bargain; the sprawling space is divided into cozy seating areas so it doesn’t overwhelm. In a rush? The owners offer Nonna’s next door for takeout sandwiches to go.

The reinvented steak house for those with expense accounts

...and one option if the per diem is limited.

“RPM succeeds in showing where steak houses are headed while paying homage to where they’ve always been,” said Chicago magazine. A spinoff of RPM Italian, Lettuce Entertain You Enterprises’ partnership with celebrities Bill and Giuliana Rancic, RPM Steak brings a cheffy spin to steak houses. While much of that is reflected in the menu, part of it shows in the decor, which is sleek with wood tables devoid of white linens. Reservations are hard to come by, but snag a seat at the bar if you’re dining solo.

This less formal, less expensive sibling of Smith & Wollensky resides on the lower level of the older steak house beside the Chicago River. Unlike traditional steak houses that require sport coats, expect to see millennials in jeans and gym shoes gathering for a bite and a beer. The horseshoe-shape bar fosters a social scene, and the gastropub-style menu encourages tables to share, with an appetizer section called “Sociables” and prime steaks sliced for divvying up.

If the line's too long at Longman & Eagle, check out the owners' other concepts

...because the fact that it's still a mob scene after all these years is evidence that this team has cracked the code on how to keep people buzzing.

Not far from McCormick Place, this hearth-to-table concept in the revitalized Hyde Park area combines a bar, restaurant and concert hall in one bilevel space. A hearth oven—used to prep brunch, small plates and dinner—is the main focal point of the design. By bringing cooking from the oven out front, guests understand at first glance what the restaurant is about.

Mixologist Paul McGee fully embraces the tiki trend with his hard-to-spot bar on Chicago’s Northwest side. To get in, imbibers have to step through a tiny Chinese takeout shop owned by the same group. To capitalize on both, Lost Lake patrons can order Chinese food delivered to the bar, and those waiting for their fried rice carryout can have beer as they wait.

While most of the fried-chicken joints in Chicago focus on the food, Parson’s gives equal consideration to cocktails, playing to Chicagoans love of sitting outside and drinking during the handful of weeks the weather is nice. Inside it’s barely bigger than a food stand, so the Logan Square spot maximizes its large outdoor patio with a bar menu of quick-to-serve drinks such as a premade negroni slushie.

...because all the key players blew into the Windy City this past year.

A couple of months before its newsmaking IPO, Danny Meyer’s Shake Shack opened its first Chicago location last November in River North. A second will follow this summer across from Millennium Park. It features the familiar lines and all the Shack classics: those burgers, flat-top hot dogs, frozen custard, shakes and “concretes”—extra dense shakes with a couple of Chicago-specific variations on offer, made with local ingredients from Bang Bang Pie Shop and Glazed & Infused Donuts.

Spike Mendelsohn exported his Washington, D.C., concept to Chicago’s Loop, and it’s evident from the lines that its popularity has made it to the Midwest. While most restaurants in the Loop require quick service for on-the-go workers, diners don’t seem to mind waiting for the better burgers. One Yelp review even notes, “I honestly think it’s better than Shake Shack.”

Refusing to kowtow to the growing customization trend, the front of the menu at Adam Fleischman’s Cali import states, “There is no substitution,” essentially implying that its flavors are the perfect formula to achieve umami, so don’t mess with it. Yet it’s still playing to dietary needs—portobello patties instead of meat and lettuce instead of a bun both are available options. While there, check out the chain’s “Umamify the Guest” program, which solicits in-the-moment customer feedback by having them drop tokens into jars upon their departure.

Others not to miss

This 28-seat, 750-square-foot (including the kitchen) “diner” attracts foodies with rare and global fish rather than clam strips.

See why diners waited in line for 26 hours, when Doug Sohn, owner of now-closed Hot Doug’s, holds a one-day pop-up May 16 at Paulina Meat Market.

Basque pinxtos and heartier Spanish fare are the specialty here, helmed by a chef whose pedigree includes Alinea.