Continue to Site >>>
Edit
Epic Kitchens opened its second location about a month ago in Chicago's Lakeview neighborhood. / Photograph by Joe Guszkowski

Epic Kitchens got its start as a traditional ghost kitchen operator. It rented five bays in a CloudKitchens facility near downtown Chicago and used the space to operate as many as 14 restaurant concepts for delivery only.

Its experience in what it calls its “R&D” kitchen helped influence the development of its newest outlet, which looks much more like a traditional restaurant.

Epic No. 2 opened a month ago, on a corner in Chicago’s busy Lakeview neighborhood. It has a bright, welcoming storefront, a dining room and a pickup counter that might eventually double as a bar. 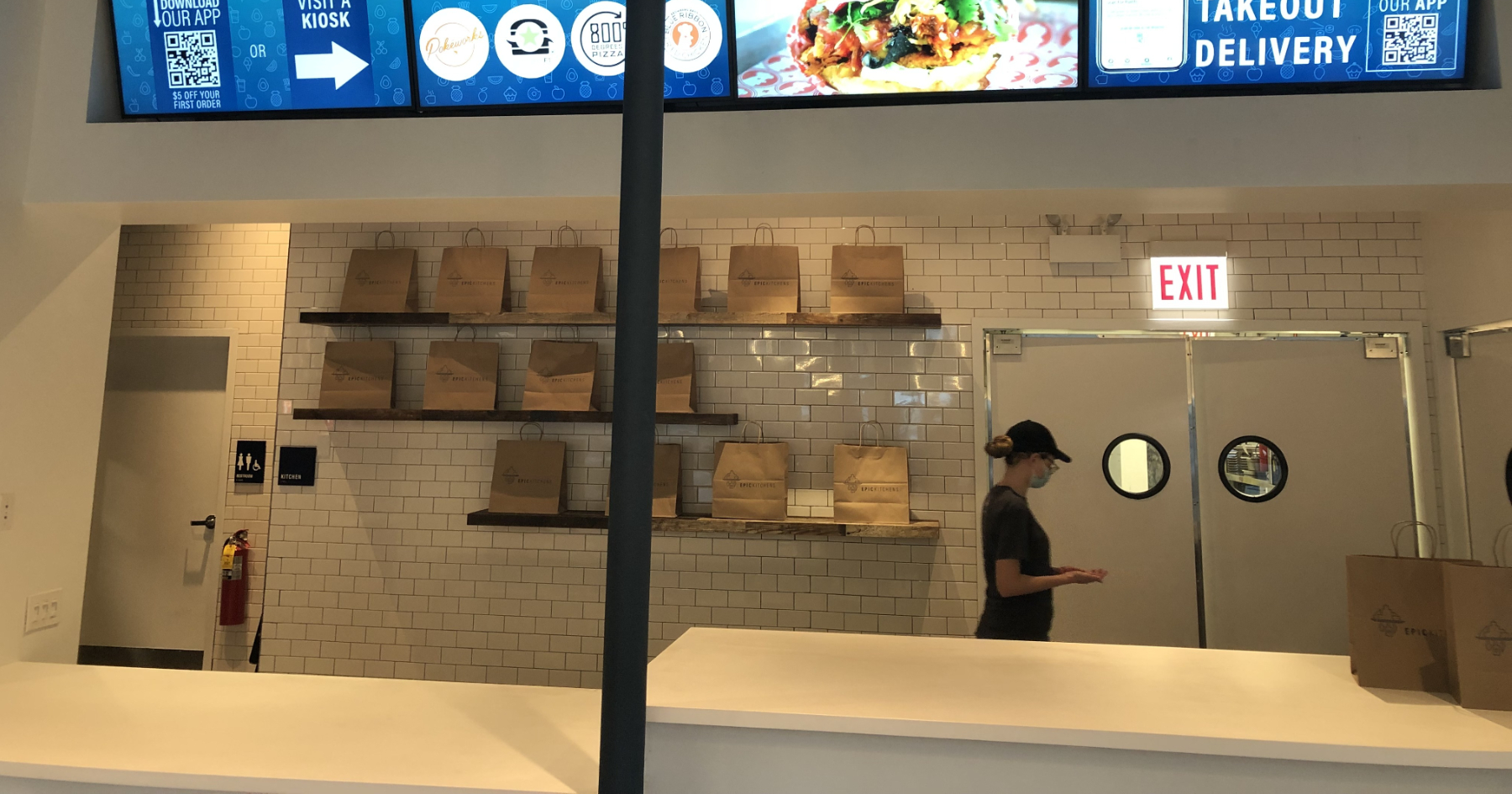 The focal point in the front-of-house is a large pickup counter for customers.

It also houses four brands—BurgerFi, 800 Degrees Pizza, Pokeworks and Blue Ribbon Fried Chicken—and plans to add up to three more to the 2,250-square-foot space, operating all of them as licensee. Customers can order from just about anywhere but at the counter: via Epic's app, self-ordering kiosks in the store, or through third-party delivery sites.

Epic’s decision to pursue the more hybrid model was based on a couple of factors.

First, marketing restaurants with no customer-facing presence—like at its first ghost kitchen—is challenging.

“The battle to build digital sales can be very expensive,” Epic co-founder and CEO Murad Karimi told Restaurant Business during a tour of the restaurant Wednesday. A physical location, especially one that’s eye-catching, helps build brand awareness in a way that a traditional ghost kitchen can’t, he said. And Epic saw plenty of opportunity to open those types of stores amid a sea of restaurant vacancies caused by the pandemic.

The Lakeview restaurant was formerly occupied by Cafe L’Appetito, a small Italian chain that closed in January 2020, before COVID-19 struck. 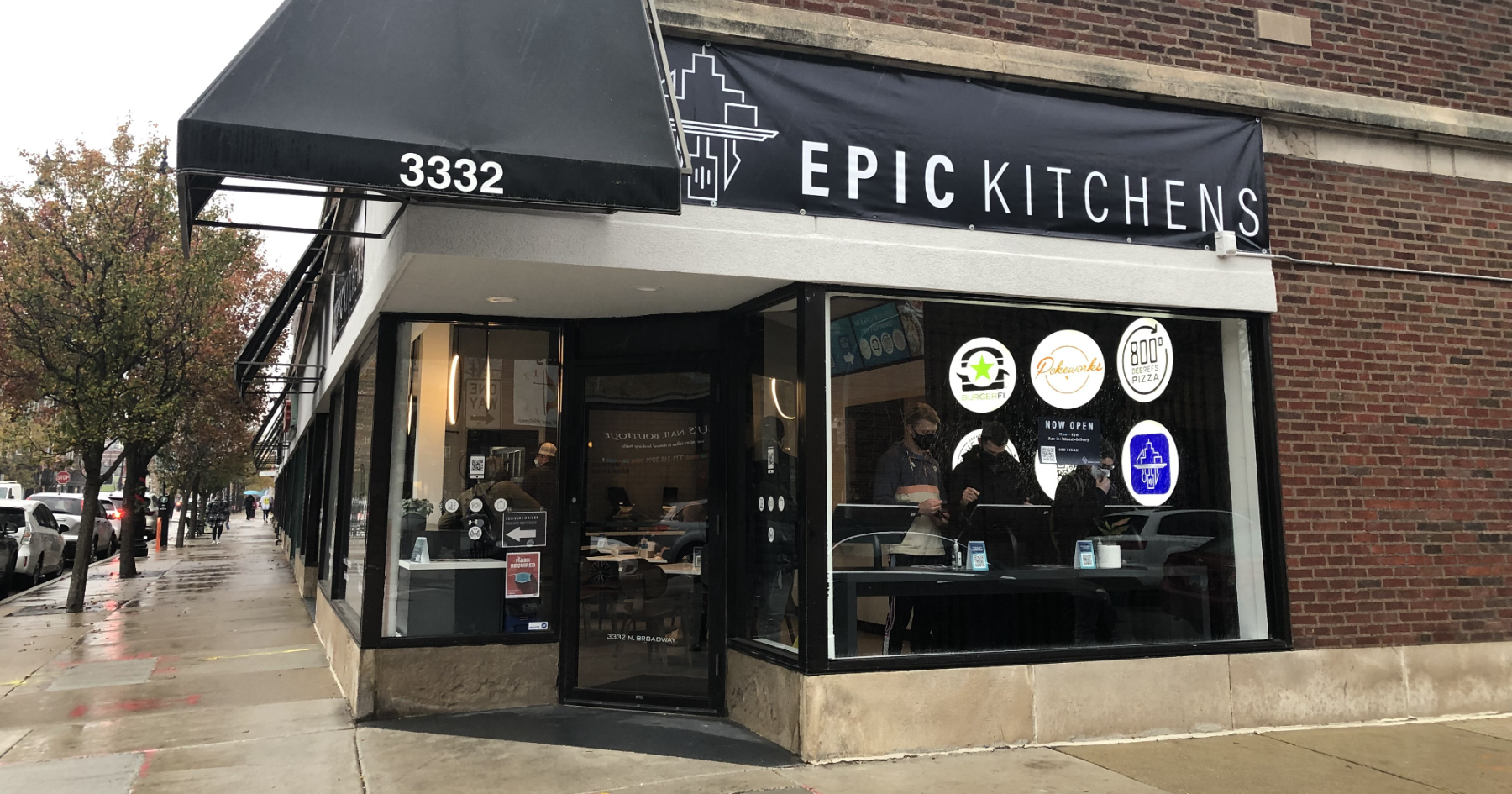 Second, Epic believed that offering ordering channels besides delivery would be more profitable. That’s why it offers a few tables and counter seating as well as kiosks for walk-in customers.

The CEO is well-versed in restaurant operations: He is also the co-founder and CEO of Mosaic Management, a franchisee of Arby’s and Moe’s Southwest Grill. Running those restaurants gave him a “front-row seat” to where the industry was headed, he said—namely, omnichannel, multibrand restaurants built around operational efficiency. Epic is his riff on that trend.

Though it might look like a regular restaurant from the outside, it was designed with off-premise in mind. There is a separate entrance and pickup counter for delivery orders, and Epic is in the process of reserving parking spaces out front for drivers. Karimi said he expects delivery to account for 50% of all orders once its third-party relationships ramp up. 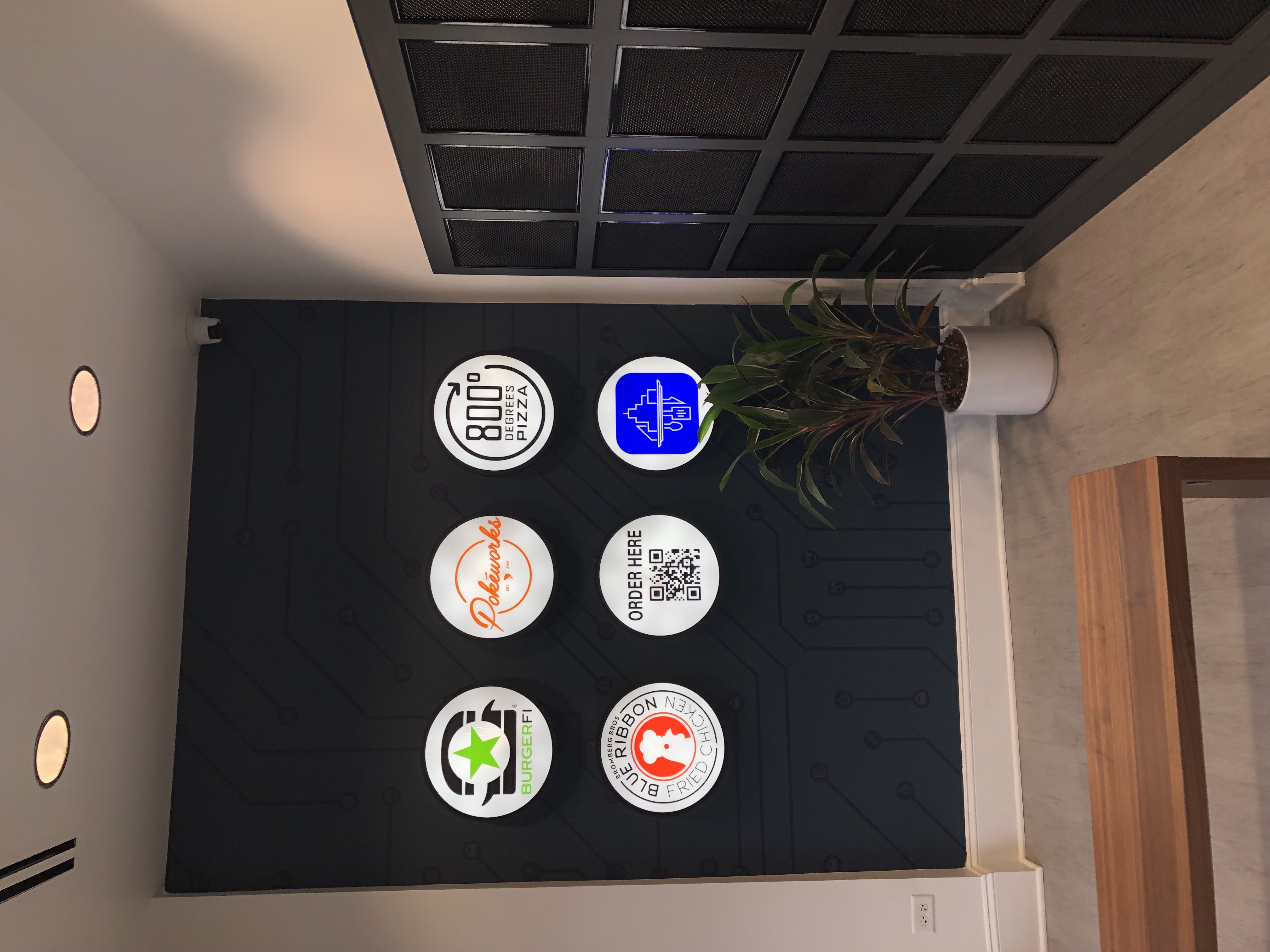 Epic has a separate pickup area for delivery orders.

In the back-of-house, each brand has its own area in the 750-square-foot kitchen. At least one staffer is responsible for each brand, though during busy times, there could be three or four people staffing a single concept.

The kitchens are much smaller than what would be normal for each brand, a setup that Karimi said was perfected at Epic’s first ghost kitchen. The Pokeworks area, for instance, is a 60-square-foot closet. That’s a lot smaller than Pokeworks’ typical kitchens in its 1,250-square-foot restaurants, but it’s still able to accommodate 90% of the chain’s menu. 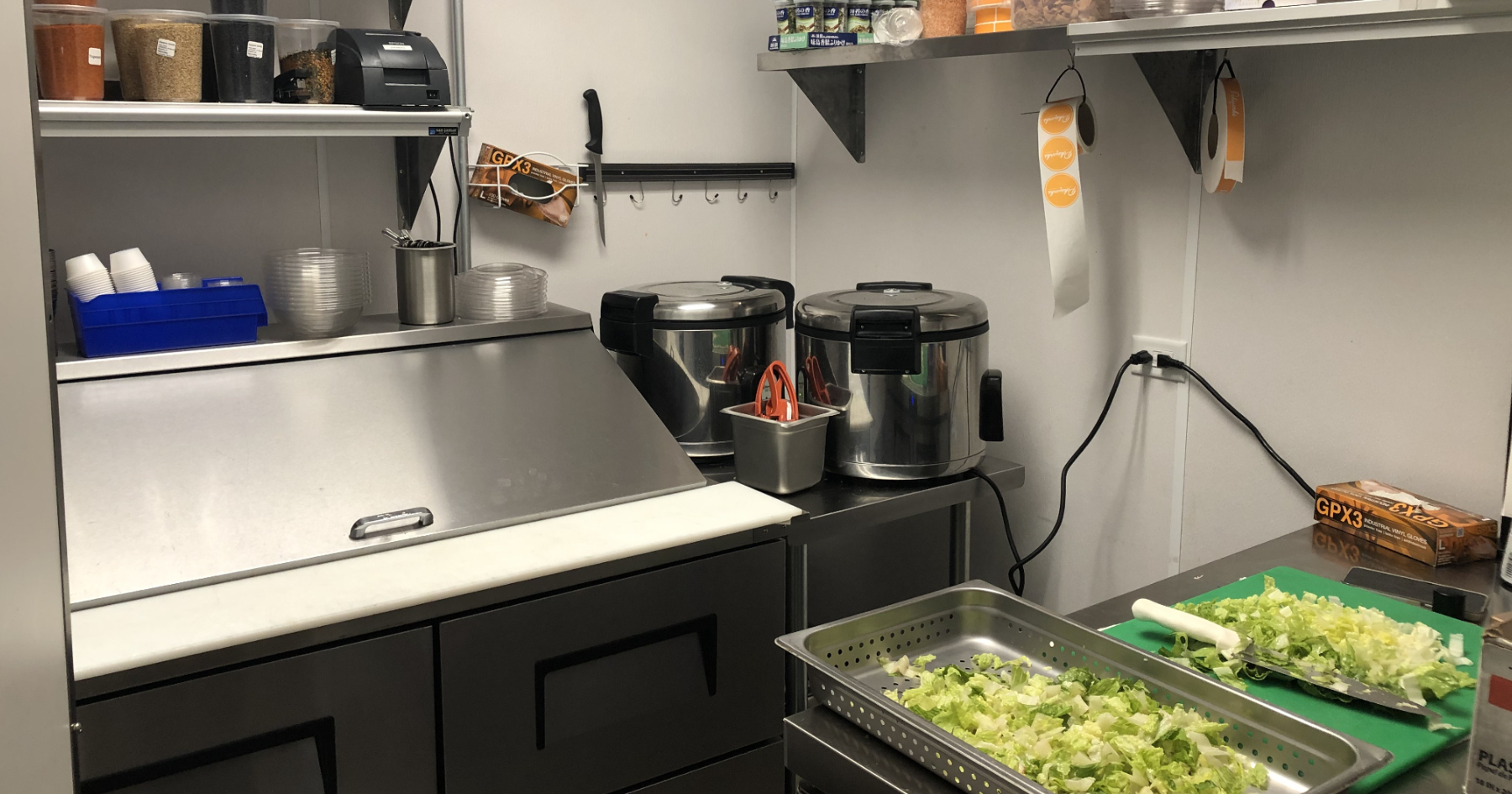 There is as much technology in the back-of-house as there is in the front. Epic puts an emphasis on cutting-edge kitchen equipment to streamline operations, and for future partnerships, it’s talking to brands with automation built into their business models, Karimi said, though he declined to share what brands those might be.

He was also hesitant to reveal the expected unit volume of the store, or which of the four brands has been the most popular. But in general, he said, Epic's most profitable brands are those with the most efficient labor models. High-tech equipment is part of that.

And the company is just getting started: It plans to open five more stores in Chicago in the next 12 months as well as one more location with CloudKitchens. 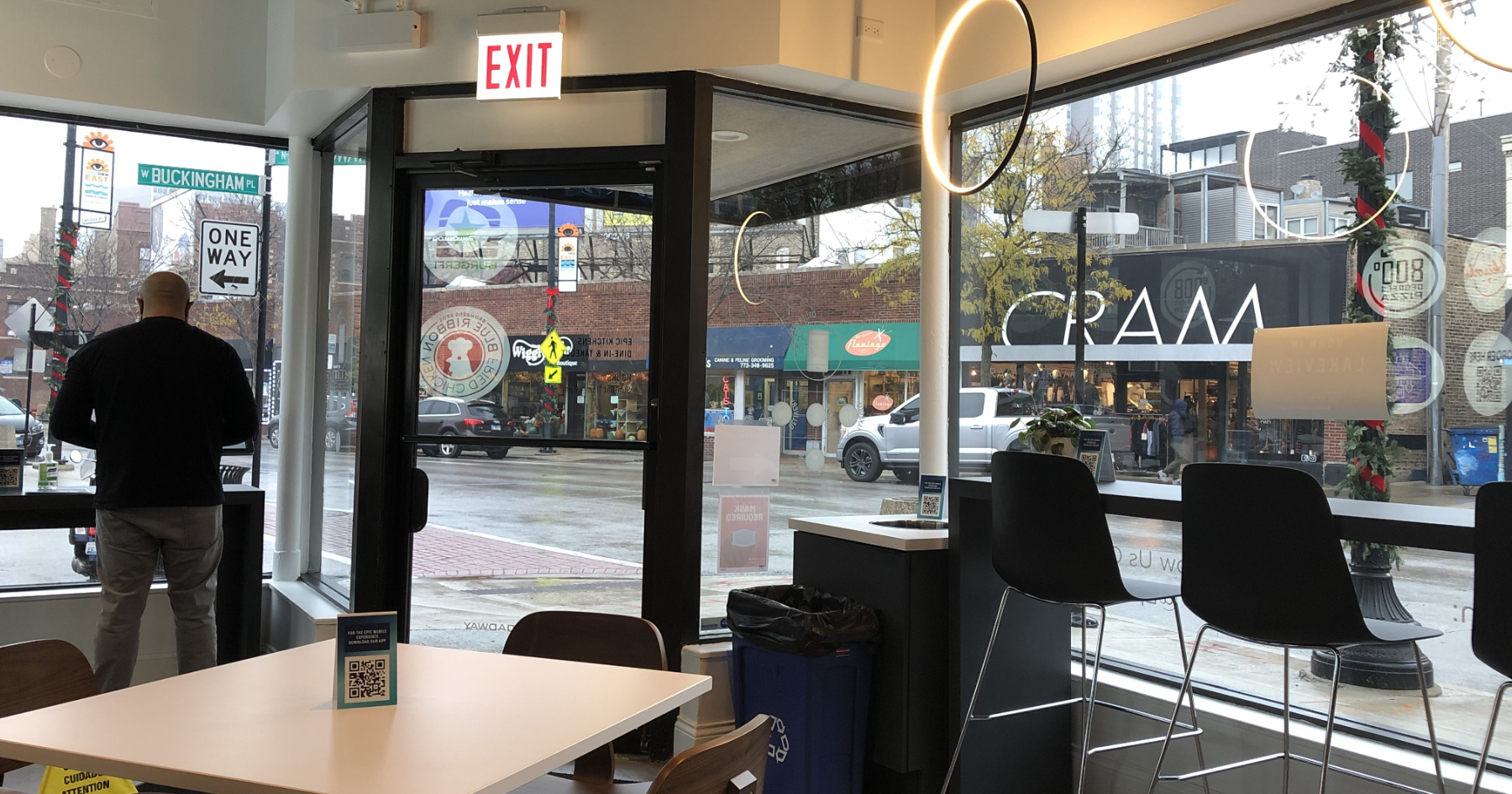 Epic liked the Lakeview location for the attractive streetscape and dense surrounding neighborhood.