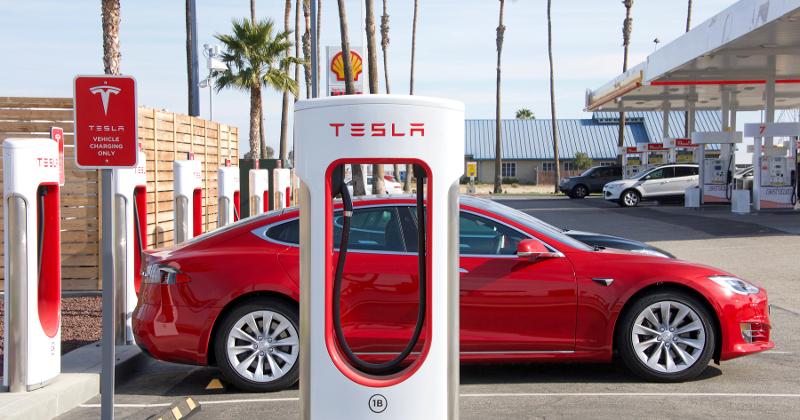 Three years after Tesla CEO Elon Musk said his company planned to open an “old-school drive-in” restaurant at one of its electric car charging stations, Tesla has applied for a trademark to use its brand in connection with the restaurant industry.

“The applicant has a bona fide intention, and is entitled, to use the mark in commerce on or in connection with the identified goods/services,” the application states.

This isn’t the first time Tesla has looked at dipping into the food business.

In 2018, Musk tweeted that he planned to open a retro fast food restaurant at one of Tesla’s Los Angeles charging stations.

The year before, Tesla opened a couple of charging stations for electric car owners that offered ready-to-eat food and self-service beverages. That year, a Tesla executive who spoke at FSTEC (the foodservice tech conference put on by Restaurant Business parent Winsight) said restaurants might make sense for his company.

“People are coming and spending 20 to 30 minutes at these stops,” Tesla Chief Technology Officer JB Straubel said at the event. “They want to eat, they want to have a cup of coffee, they want to use the bathroom.”

Straubel added, though, that the car company didn’t plan to run its own food concepts and would instead pursue partnerships with existing restaurants.

This trademark application appears to change that strategy, though, in seeking to create restaurants branded with the Tesla name and logo.

As recently as this April, Musk tweeted that he still hoped to open a ‘50s-style diner at the Supercharger station in Santa Monica, Calif., “soon.”

A Tesla restaurant concept could prove to have a significant audience.

Musk’s company is the world’s leading electric vehicle brand, selling nearly half a million cars in 2020 and growing revenue 28% year over year, according to data firm Statista.

Teslas can be charged at home or at a network of more than 25,000 Supercharger stations around the world. There are also charging sites at about 4,500 restaurants, hotels, vineyards and more, according to the company.