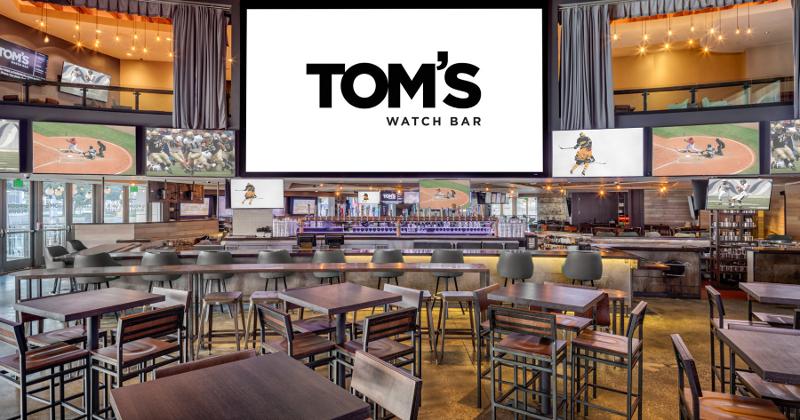 Tom’s Watch Bar has raised $30 million to open more of what it calls “super sports bars”—massive establishments tricked out with hundreds of TVs showing sporting events of all kinds.

The funding came from Sagard Credit Partners and will help the Denver-based chain as it looks to more than quadruple its footprint in the next few years.

Tom’s currently has five locations with eight under construction. It’s in the process of negotiating 10 more units for 2023 and 2024.

The brand has its roots in Tom’s Urban, a sports bar concept co-founded in 2014 by Tom Ryan, the co-founder of Smashburger and a former U.S. CMO of McDonald’s. Tom’s Watch Bar debuted in 2019, boasting a different menu and what it said was the largest TV screen in downtown Los Angeles. All Tom’s Urban locations have apparently now been rebranded as Watch Bars.

"Tom's Watch Bar is excited for the opportunity to partner with Sagard Credit Partners for the continued growth of our innovative sports bar concept, with the goal of making every seat the best seat in the house," Ryan said in a statement.

In addition to 360 degrees of TV screens, Tom’s offers a wide variety of beers served in 40-ounce, two-handled steins as well as pub fare with a contemporary touch.

Current locations are in Denver, Los Angeles, Washington, Las Vegas and Connecticut, with a Minneapolis unit slated to open in October.

The investment is the latest to hit the eatertainment sector coming out of the pandemic, with chains like Topgolf, Puttshack and other experiential concepts benefiting from a return to in-person gatherings.