As much as QSRs want to compete with fast-casuals—introducing higher-quality menu items and other experience-oriented amenities—many established players in the fast-casual sector want to emulate QSRs in one critical area: stay-in-your-car convenience. 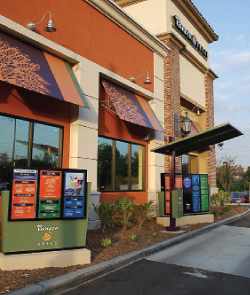 But can a segment established around the idea of cooked-to-order food, customizable menu options and an enhanced experience within the four walls deliver the kind of speed that consumers have come to expect from a drive-thru? And can they do it without compromising the all-important brand proposition of fast-casual?

“Drive-thrus used to have the connotation of being about convenience only,” says Danny Bendas, managing partner of Synergy Restaurant Consultants. “But Starbucks changed that. You’ve got to give them credit for doing drive-thrus and not letting the quality and the uniqueness of the brand experience suffer.”

Since then, other fast- casual restaurant brands have gotten into this game-changing movement, including Panera, Firehouse Subs, Fazoli’s, Bono’s Pit BBQ, Beck’s Prime—yes, steaks from the drive-thru—and Mooyah Burgers and Fries.

“The question for the fast-casual segment will always be: Can you deliver an acceptable drive-thru [experience] with a concept that is as experiential as ours?” says Alan Hixon, president of Mooyah, which watched the situation carefully for several years before deciding to open two drive-thru test units in Texas in late 2012.

Fast-casual standard-bearer Panera spent 10 years studying, planning and testing drive-thrus before introducing them in 2005. They now have 200 drive-thru units and as long as space allows, new units are all outfitted with them.

“Years ago we didn’t see [drive-thrus] as how Panera would play out,” says chief concept officer Scott Davis. “The biggest surprise in all this has been how accepting our customers are of it. It enhances the commitment to the brand.”

Davis says the first question the chain wrestled with was how they could have a drive-thru without disrupting the in-store experience. They were able to achieve this by incorporating an isolated drive-thru operation within the restaurant.

The chain has introduced new packaging—boxes instead of the in-store wrapping—to ensure the food’s integrity. They also made sure to add enough support for the drive-thru workers to keep them from stressing out, to avoid the tired, frazzled demeanor of many QSR drive-thru workers.

Davis says order times are staying below their goal of five minutes and that double-digit sales increases are nearly all incremental.

Another fast casual giant, Firehouse Subs, also entered the drive thru space cautiously. CEO Don Fox put a moratorium on them when he joined the company in 2003, fresh off a 23-year stint at Burger King (there were two freestanding Firehouse units with drive-thrus at the time).
But the company began quietly experimenting in 2011, and now has half a dozen in operation, generating a solid 30 percent of sales from the drive-thru window. While this is nothing like the 60 to 70 percent typical in the QSR segment, Fox believes that in Firehouse’s case these sales are largely incremental.

The company has concluded that where there is a physical place for it (end caps and pads in both new and existing locations, for instance), and sufficient volume to justify the added expense, putting in a drive-thru will now be an option. “Our feeling now is, if you’re sitting on the real estate, why not,” says Fox. “We’ll be making these decisions on a case-by-case basis, depending upon the site, the franchisee’s capabilities, and our assessment of the potential.”

Firehouse’s drive-thrus cost anywhere from $25,000 to $50,000 to build (depending upon existing sitework), including the cost of additional steamers to prepare the sandwiches, as well as headsets and ordering terminals. In addition, there are ongoing labor and operational considerations: “You have to have a dedicated staffer to handle the window,” says Fox, “at least during rush periods.” Cross-training employees so they can move to prep or another function after the rush helps cost-justify the additional man-hours.

And adding more steamers has actually reduced prep time. Traditional units without drive-thrus have anywhere from six to 10 of the machines, which are deployed to heat the meat and cheese for two large sandwiches in two minutes, 45 seconds. A drive-thru calls for four to six additional steamers, which are used to produce one sandwich at a time, reducing the heating duration by a minute. “When the drive-thru line is stacked the way we like it, with at least five cars queued, that allows plenty of time for the order to be ready by the time the guest gets to the pickup window,” notes Fox. “That keeps the total time for a drive-thru order in the five- to six-minute range, and we’ve found that there’s no level of customer disappointment with that timeframe.”

There are also benefits beyond incremental sales: “Whenever you shift sales to takeout or drive-thru, you relieve some pressure on the lobby and interior queuing by easing the bottlenecks,” explains Fox. Takeout and drive-thru add to total capacity. “It’s a nice problem to have: When the dining room is full, customers can choose to take their meal to-go, rather than going somewhere else.” Accordingly, Firehouse will also ramp up its efforts to attain more sites where it can have freestanding units, rather than its typical in-line configurations.

“Like most fast-casual chains, Firehouse has been successful because it offers a better level of service, ambience, quality and presentation relative to QSRs,” adds Fox. “Our preference is always for our customers to come in and dine—strategically, that’s our brand and that’s when we’re at our best. Still, takeout has become a vital part of our industry, and ultimately it’s the customer’s choice.”