I’m a born and bred New Yorker, but I could count the number of times on one hand that I had been to Brooklyn … until the last five years or so. I grew up in Queens, my grandparents and cousins lived in the Bronx and I moved to Manhattan soon after graduating from college. 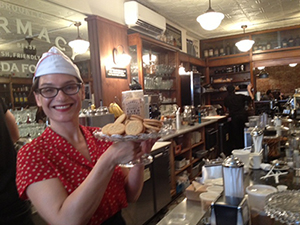 There was really no good reason to go to Brooklyn back then. Not to eat, for sure. Except for Lundy’s in Sheepshead Bay, an institution everyone had to try once for its gargantuan platters of seafood, and The River Café, the most romantic spot for a special dinner date, it wasn’t worth the trip across the river for a restaurant meal.

Well, you don’t have to be an Anthony Bourdain groupie to know how radically the Brooklyn dining scene has changed. I did eventually venture forth to try a few of the restaurants everyone was buzzing about, but it still seemed like a big effort to make the trek when there were so many great places to eat closer to home.

That’s why I was really pumped when the California Almond Board arranged a foodie tour of Brooklyn for the foodservice media. Not only were we going to visit some of the hottest restaurants in Williamsburg, Park Slope, Carroll Gardens, Cobble Hill and Bed-Stuy—all trendsetting Brooklyn neighborhoods—we were scheduled to meet with several artisanal food producers who have been instrumental in putting Brooklyn on the culinary map.

The tour was led by Michael Harlan Turkell, former chef and current journalist and photographer of The New Brooklyn Cookbook (William Morrow/Harper Collins). He demonstrated an extraordinary knowledge and enthusiasm about the borough, especially its food and drink scene. And he organized a delicious and educational two-day culinary romp through several Brooklyn neighborhoods. Here’s where our journey took us on Day One.

1. Brooklyn Farmacy. Nothing like starting a day of gluttony with an ice cream sundae and an authentic egg cream prepared in an authentic turn-of-the-century pharmacy. The space was built as an apothecary, and the wooden cabinetry and tile floor are all original. We were told that the soda fountain was put in a little later; before seltzer was the base for egg creams and ice cream sodas it was used medicinally.

Soda fountains reached their height around 1930, a rise well documented in Restaurant Business magazine, which was founded as Soda Fountain Business. After World War II, these iconic counters became luncheonettes.

But Brooklyn Farmacy has gone back in time to the classic, upgrading their soda fountain treats with locally sourced ingredients and housemade products. Along with the traditional egg cream—which is a frothy mix of chocolate or vanilla syrup, a little milk and seltzer but no eggs—we dug into an Almond Joyful Sundae crowned by hot fudge and fresh whipped cream along with melt-in-your-mouth Happily Ever After sandwich cookies baked by Nell, the Farmacy’s cook. “Our goal was to prove that the new Brooklyn is more than pizza and bagels,” she told us. A goal that was replayed in the restaurants we visited next.

2.  Palo Santo. I had heard that some Brooklyn chefs tended gardens and raised chickens right on the borough’s blocks, but I didn’t believe it until I met Jacques Gautier of Palo Santo. His Park Slope restaurant occupies the bottom of a Brooklyn row house and on his rooftop is a small-scale urban farm with chickens, a vegetable garden and a compost pile for organic waste. All the restaurant’s dishwashers and cooks work one day a week in the garden. Gautier is also very involved in the New Farmer Development Program, which helps immigrants start farms and grow produce native to their country … like Mexican herbs and chilies.

Chef Gautier’s diverse upbringing in Haiti and the U.S. is reflected in his menu. One of Palo Santo’s signatures is the Chile Relleno with queso fresco, chick peas, raisins and romesco. We also sampled Pan Roasted Mackerel with mole blanco and green garlic grown on the rooftop, and for dessert, a luscious Flourless Almond Cake with orange and ginger ice cream. The wine list is also a Latin-American hybrid—half South American and half New York State.

Recycling at Palo Santo doesn’t happen just in the compost pile—reclaimed wood and other materials make up the interior of the restaurant. With his sous chef as construction partner, Gautier crafted all the tables and chairs, and the two used the wood scraps to make distinctive picture frames that were painted by a friend. A unique environment for a unique restaurateur.

3.  La Vara. An Argentinian Jew cooking refined tapas in a Spanish Moorish style was the next stop on our multi-cultural Brooklyn tour. Chef Alex Raij has two Basque restaurants in Manhattan, but felt Brooklyn was right for a concept that fused Spanish, Sephardic and Moorish elements—a cuisine that has a long, rich history abroad but has since been forgotten. “Every dish we serve exists in Spain, but the versions I make are very personal,” she explained.

In contrast to Palo Santo, the design here is contemporary and minimalist. We began our feast with Moje—a layered salad of imported tuna, olives, endive, tomato and almonds. Chef Raij uses almonds to add crunch, bitter notes, sweetness and/or richness to dishes. In Spain, the ground nuts are often used as a thickening agent instead of bread crumbs—a technique exemplified in two of La Vara’s dishes. In Ajo Blanco, shrimp are served over a white gazpacho thickened with ground almonds and pine nuts; the Caldereta featured mussels over a saffron almond sauce. We were stuffed by this point, but there was also a Torta Santiago to taste for dessert. Time to waddle on to the next stop.

4. Umi Nom. Filipino cooking, long under-represented in New York restaurants, is now getting its turn in the spotlight in Brooklyn’s Bedford-Stuyvesant neighborhood—aka Bed-Stuy. Unlike Park Slope, Williamsburg, Carroll Gardens and Cobble Hill, this area is just beginning to get on foodies’ radar. CIA grad chef-owner King Phojanakong also runs Kuma Inn in Manhattan, a Southeast-Asian small plates concept, but Umi Nom is more laid back, bringing together the food of his Filipino mother and Thai father. The restaurant occupies a former laundromat that took a lot of sweat and tears to convert into an eatery; the kitchen was literally build from the ground up in the backyard.

We sat at long tables and shared everything family-style—like they do in the Philippines, King told us. Luckily, I found a little room for more food, because I wouldn’t have wanted to miss any of these vibrant dishes. Pig figured in a couple of preps, including Adobo & Sisig Tacos with pork belly, ears and snout doused with tomato salsa and pickled onions and Sauteed Sweet Sausage with sticky rice and Thai chili lime sauce. Fried Willapa Bay oysters with sweet chili aioli were a crowd favorite, and stir-fried egg noodles finished off the mulit-course meal in typical Filippino fashion.

For me, most Asian desserts are an acquired taste and not worth the calories, and the Almond Milk Halo-Halo didn’t do much to change my opinion. But the combo of shaved ice, purple yam, coconut, black grass jelly and jackfruit was a refreshing way to end this amazing parade of dishes. I couldn’t believe we had one more stop to make before sleeping off my food coma, but it was time for a nightcap.

5. Char No. 4. We were welcomed into this cozy bar in a 19th century row house in the Cobble Hill section of Brooklyn. Char No. 4 refers to the practice of aging bourbon in charred oak barrels and no surprise—the place specializes in bourbon cocktails and features a wide selection of brown spirits. The vibe here is very cool, so we tried our best to live up to it by ordering up the barrel-aged cocktails and specialty bourbon drinks. The former included the house Mint Julep and the latter, a Noreaster—a mix of bourbon, ginger beer, lime and maple syrup.

Of course, the hosts at Char No. 4 couldn’t let us sit without feeding us too. The menu offers a good selection of smoked meats, and I have to admit, the house-smoked bacon paired extremely well with the whiskeys even though I couldn’t imagine eating another thing.

Now it was time to catch some shut-eye before embarking on Day Two of my Brooklyn gastronomic experience. Stay tuned for our eating adventures in Red Hook and Williamsburg.