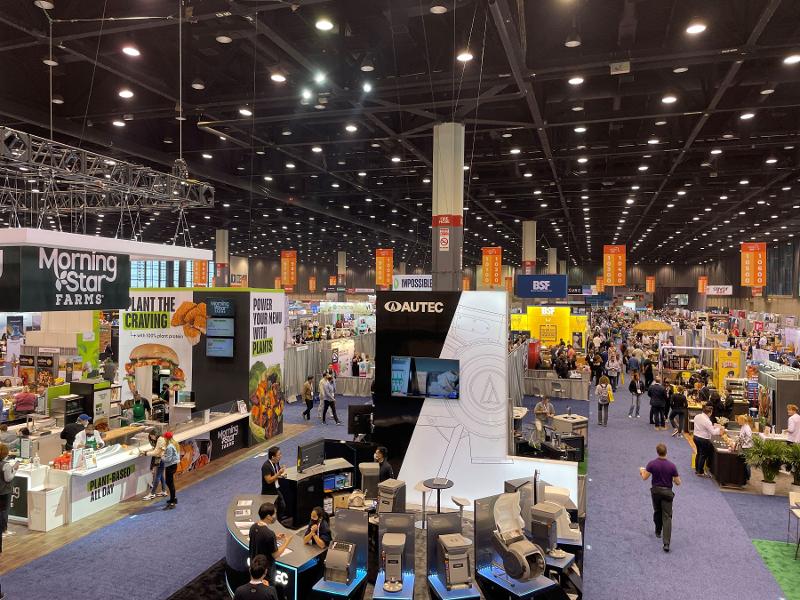 The first National Restaurant Association Show in three years concluded this week, providing attendees with a four-day immersion into the world of foodservice.

Here are 10 things we took out of the show this year.

The mood was surprisingly upbeat

We say this is surprising simply because of the environment outside the show. Stocks have been plunging. Costs are soaring, so much that there is mounting concern about the state of the independent operator given the dramatic erosion of profit margins. Nobody seems to know when it will end. Oh, and the pandemic is still out there.

Yet the mood among attendees remained upbeat. While we heard complaints, the mood was positive. Perhaps it was because sales remain strong—we heard from more than one operator that the past two months were strong—or perhaps everyone was just happy to be there after three years.

Your food will come via robots

Every show has its singular product that marks that year’s biggest trend. When fast-casual pizza was a big deal we kept finding pizza ovens, for instance.

This year it was the serving robot that looks like something out of a Star Wars movie. While robots of all kinds were a popular attraction at the show, the serving robot was the most popular by a long shot. One did not need to go far to find one. The robots are generally targeted at full-service restaurants where they take food to a customer’s table. Restaurants have been adding them to offset some labor costs. But it remains to be seen just how popular they will be. 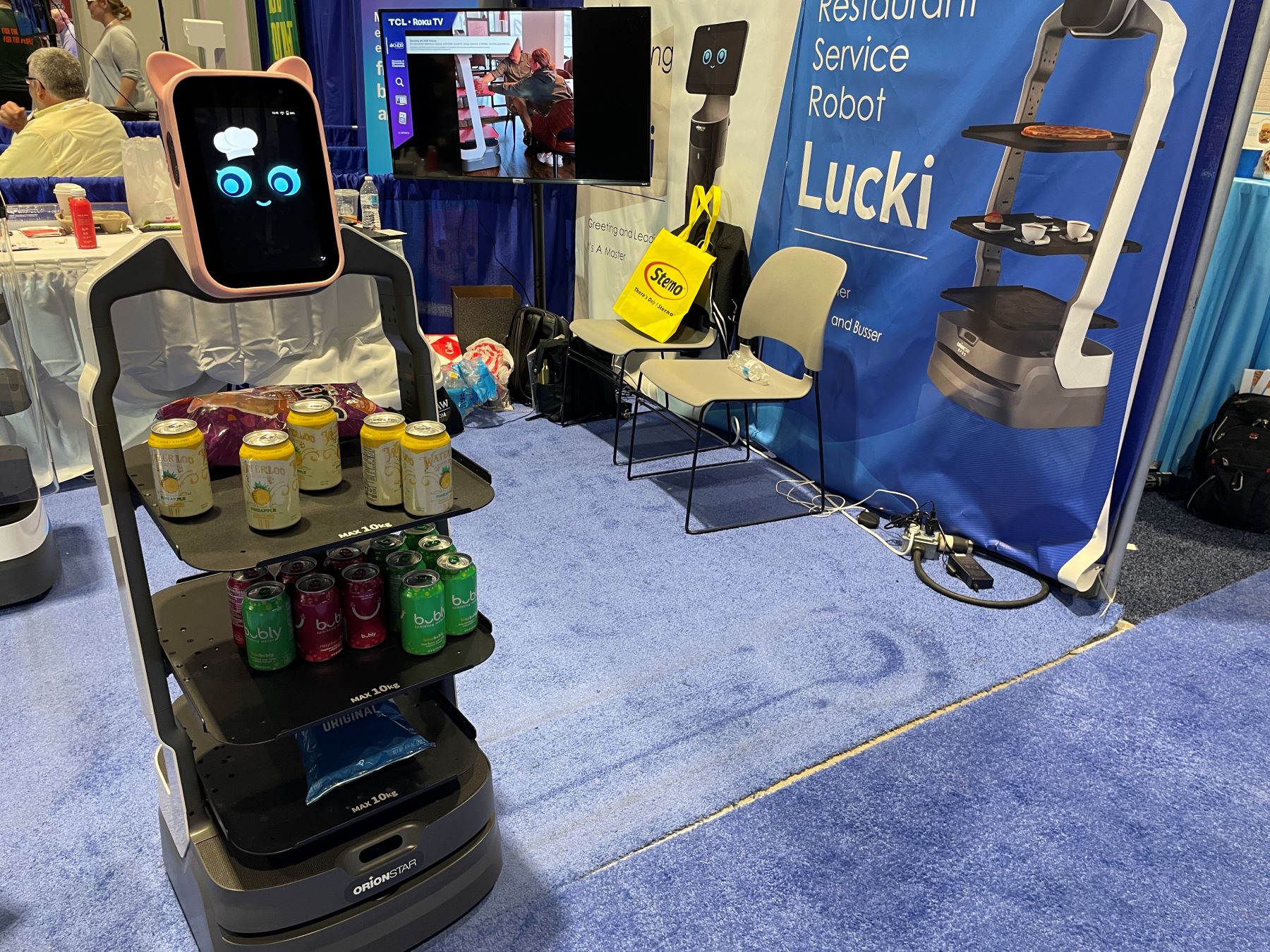 And it will be made from plants

Cows, chickens and pigs are out. Chickpeas, pea protein and mushrooms are in. The single biggest food trend by a long shot was the plant-based meat analogues. If a product traditionally comes from an animal, there is someone out there trying to mimic that using plants and all of them were on display this week.

Plant-based chicken was popular, along with plant-based sausage, plant-based beef (of course), lots of plant-based fish, a weird plant-based egg, plant-based ice cream and even a new term “animal-free” dairy. Our Heather Lalley tasted some of these and wrote about a few she liked. We tasted some and didn’t like most of them (though we were quite fond of the Beyond Meat sausage if we’re being honest, and the animal-free dairy was outstanding).

Still, we’ll stick to the fries cooked in Wagyu beef tallow from South Chicago Packing, the best thing we tried during the show.

Drink sales have been a problem since people started ordering takeout in droves. Innovation on beverages has been massive. There were new types of drinks, some of which we liked, others of which we tried and then desperately tried not to spit out in front of the salesperson. Yes, Coke and Pepsi had their massive booths on display and showed off all kinds of things, but beverage innovation was all over the place.

Companies had numerous options for alcohol-free cocktails, which is good, generally. But even packaging companies like Georgia Pacific had potential answers to the lack of drink sales with its Automated Sealing Machine, which seals takeout cups strongly enough that they can withstand the bumpy delivery ride.

Those things were everywhere. You literally couldn’t walk the show floor without one of those codes bouncing against your torso—they were on the badges, after all.

Operators love QR codes because they don’t have to print menus. They can save on labor and can collect customers’ data. But they don’t always work—editors witnessed numerous attendees struggling to scan the codes correctly.

Data is a big deal

Speaking of data, it remains a huge area of growth. Sure, get excited about automation, including robots and artificial intelligence. But on the technology side, customer data was a close second.

Operators were curious about the best ways to gather and interpret information about everything from their guests to staff. Square was one of them: “We’re gonna start becoming really, really, really obsessed about giving you very tangible, actionable [data],” said Bryan Solar, head of restaurants for the tech supplier, during a Sunday session.

And restaurants are shrinking

With so much focus on takeout, there is less of a focus on customers who dine in. To be sure, those customers will continue to come in to dine at full-service restaurants—particularly for special occasions. But restaurants will need fewer seats and more of them are looking at smaller spaces.

That was evident at the show. More equipment needs to be versatile, able to do a lot in a smaller space. There were espresso machines that could pump out drink after drink from a small space and even a brewing machine that could turn a bar into a brewpub in just 150 feet of space.

As our Peter Romeo pointed out, equipment was on full display, but good luck getting it. Delays on equipment remain a major problem. Frank Inoa, VP of design and engineering for Inspire Brands, said on a panel hosted by our Pat Cobe that delays cause problems even when you try to reconfigure existing equipment, because it can take several weeks just to get a part. And it’s uncertain how long these delays will last.

Everything was about controlling costs

Equipment makers always like to tout their products’ ability to improve profitability—this is a business-focused event, after all—but this year that idea took center stage, given margin concerns. Even a napkin dispenser on display at Georgia Pacific, which controls the number of napkins available to customers, had costs in mind. The founder of a line of reusable containers also focused on costs in touting his idea. Costs are front and center for operators right now, and suppliers know that.

But not everyone can afford new technology

Still, as pointed out during one session on artificial intelligence, profitability does remain a problem. Multiple attendees at the session asked about costs and one of them implored panelists to keep struggling independents in mind.

The simple fact is, many operators have thinner margins today than they did the last time the show was held in 2019. That means they have less financial wherewithal to afford some of these new technologies. One big challenge for vendors going forward is to make their case, and then find ways for smaller restaurants to afford what they’re selling. Because as we noted at the outset, profitability remains a challenge.

Still, overcoming challenges is what this business is all about. Those who attended the show withstood more than two years of the worst of them and were able to come out on the other side.