On Monday, Wendy’s posted a photo of a digital breakfast coupon whose value was dependent upon the number of retweets: the more customers retweeted it, the more valuable the coupon would be—up to 99% if more than 3.3 million followers retweeted it.

Alas, customers would only get 30%--about 11,000 users retweeted the Uber Eats coupon, more than the threshold for a 30% discount but considerably lower than the 44,444 retweets necessary for 44% off a breakfast order of 15% or more.

While the offer was only good for customers who ordered breakfast from Uber Eats, it demonstrates an end-of-year push in the fast-food business for a breakfast daypart that has been somewhat smaller since the pandemic began in March. And it sets up a battle for morning supremacy between Wendy’s and archrival McDonald’s.

Later this month, for instance, McDonald’s will start selling bakery items—an apple fritter, cinnamon roll and a blueberry muffin. While the McCafe Bakery line is an all-day feature, the items are being introduced at least in part to give the company sweeter options in the morning, something the Chicago-based burger giant has lacked for the most part.

Wendy’s, meanwhile, has planned to invest $15 million in the last three months of the year to market its breakfast business. 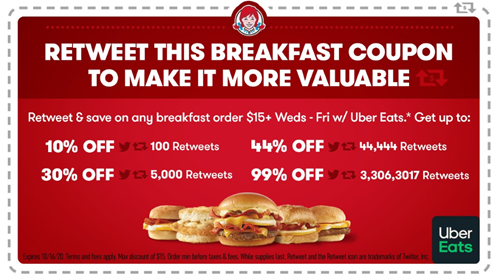 This year was set up to feature an intense competition between the two companies for breakfast. McDonald’s, long the dominant player in the fast-food breakfast world, had finally generated stronger traffic in the morning after two years of declines, and was working to solidify that market in March when Wendy’s introduced its daypart.

The pandemic changed that dynamic, largely shrinking the size of the breakfast market as consumers worked from home. Nearly a quarter of the U.S. workforce continued to work from home as of September, meaning there are fewer people driving to and from work and stopping along the way for a coffee and a breakfast sandwich.

Companies also pulled back on a lot of marketing until relatively recently. So the breakfast battle we expected in March was put on hold.

Fast-food sales have largely recovered and are in growth mode as customers flock to drive-thrus. Most quick-service chains have largely returned to typical marketing to fight for that market.

Executives for both McDonald’s and Wendy’s vowed to go harder after breakfast coming out of the pandemic. Chris Kempczinski, McDonald’s CEO, said in July that the company hadn’t focused enough on breakfast in previous years as it worked on other dayparts. “As we emerge from this, I think part of it is certainly going to be a rededication from a marketing and investment standpoint to go after breakfast,” he said in July, according to a transcript on the financial services site Sentieo.

He noted that the company’s drive-thrus—which have improved its speed of service during the pandemic—“is an advantage that we’re looking for going forward.” He also promised “innovation in breakfast.”

For Wendy’s, the end-of-year marketing push is particularly important. The company took a risk introducing breakfast nationally in March after several previous efforts to add the daypart failed. Wendy’s breakfast looked like a success early on, settling in at 8% of sales in the company’s second quarter.

It opted to spend $15 million in additional marketing, focused on continuing to build that breakfast business. “We plan to market breakfast in a big way in the back half of the year as more and more people fall back into their daily routines,” CEO Todd Penegor said back in August.

Pushing for more breakfast business toward the end of the year could help Wendy’s keep that sales momentum and perhaps increase it, which could keep franchisees interested in keeping the daypart. Operators will have the option to opt out of the daypart if it is not profitable, making the morning’s sales growth particularly vital.

“Folks are feeling very pleased about how our breakfast daypart is managing,” Penegor said. “We want to play to that strength and continue to create awareness.”