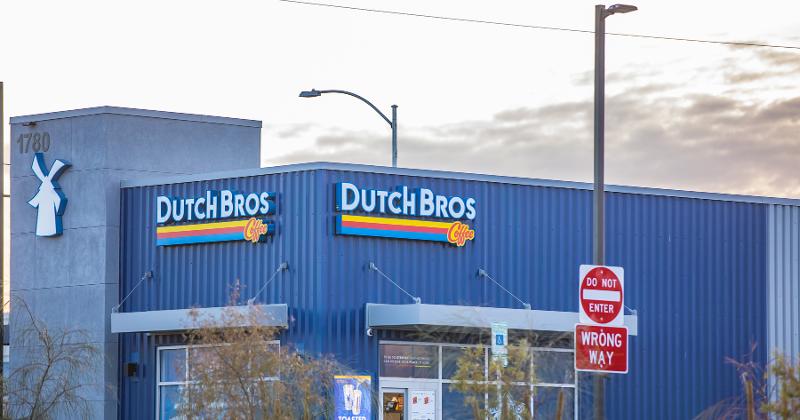 Wall Street took what many considered to be a long-awaited correction on Monday. The Dow Jones Industrial Average fell as much as 1,000 points and closed down 1.8%. The S&P 500 fell 1.3%.

Dutch Bros shares closed at $51.56 per share on Monday.

The year’s second restaurant IPO sold shares at $23 last week, raising $484 million in the process. The shares rose 60% on its first day of trading and increased again on Monday after the IPO’s underwriters agreed to exercise their option to buy another 3.2 million shares of the company’s stock.

Dutch Bros operates 471 shops in 11 states, most of them on the west coast.

The company wasn’t the only restaurant chain to see its stock rise on Monday. Fat Brands, the owner of Fatburger and Johnny Rockets among other chains, gained nearly 4%. Its share price has nearly doubled this year following a merger with its top shareholder Fog Cutter Capital and a pair of acquisitions funded with securitized debt, including the $442.5 million purchase of Global Franchise Group and the $300 million deal for Twin Peaks.

Fiesta Restaurant Group was up 3%, BBQ Holdings rose 1.5% and Dine Brands was up 1%.

For the most part, however, restaurant stocks fell along with the broader market. Casual dining companies were down 0.7%, faring better than fast casual (down 1.7%) or quick-service restaurants (down 1.4%).

While stocks fell on Monday, they were set to rebound on Tuesday. Futures indexes were higher before market, suggesting that investors see an opportunity to buy.