It’s no longer news that craft beer sales are on the rise—nearly 12 percent last year, according to the Brewer’s Association. So now is a good time to diversify your beer list with some crafty selections. It’s easier than ever to buy distinctive brews, thanks to recent developments in distribution and importation. 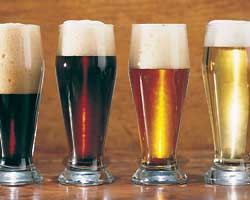 To begin, the number of specialty brand distributors has been increasing, providing operators with greater access to regional and craft beers. As a plus, these specialty houses generally have knowledgeable staff to guide you.

In addition, consolidation and agreements between brewing giants have generated increased access to greater variety. Anheuser-Busch recently struck an import and distribution deal with European giant InBev, which means you can now place an order for exotic specialties like Hoegaarden and Leffe from the same distributor who brings Bud to your restaurant.

Speaking of Budweiser, Anheuser-Busch now imports the original Czech lager—sold in most of the world as Budvar—under the Czechvar label, but still traditionally brewed. And although connoisseurs might disdain so-called “stealth beers” (craft-style brews made by the big boys but marketed as a separate brand), aficionados would say that a well-made beer is a great beer no matter who brewed it. What’s more, stealth brews, like the popular Blue Moon White (made by Coors), are easy to come by via regular channels.

Knowing your way around a label can be a big help when selecting new beers to buy.

NAME: Brewmasters love to tag their creations with names like Delirium Tremens and Old Crustacean. Quirky IDs can help staff handsell the products and provide a glimpse into the beer’s character. Brooklyn Brewery’s Monster, for example, is a behemoth of a beer.

STYLE: Bock or Belgian, ESB or IPA. The brew’s style on the label will clue you in as to how it will taste in the glass.

HOPS and IBUs Hops, picked from a flowering vine related to cannabis, serve a threefold purpose: they add bitterness to offset malty sweetness, they contribute floral and herbal aromas and they keep beer fresh. Many brewmasters boast of the hops varieties on the label: American hops like Cascade and Mt. Hood are bold; European varieties, like Hallertau and Saaz, are more reserved and elegant. Also trumpeted on labels are IBUs or international bitterness units. Mild beers, like American lagers, score only 5 to 15 IBUs, while IPAs can range from 40 to 60 or more.

MALT: Most beer is brewed from malted barley, which is often roasted for color and flavor. Pale malt makes pale brews; darker roasts like chocolate and black patent make dark beers such as porters and stouts.

ALCOHOL: Two methods are used to measure the amount of alcohol: as a percentage by weight (ABW) and more commonly, a percentage by volume (ABV). Most beers are under 5 percent by volume. Barleywines can reach as high as 10 percent or more.

FRESHNESS: Although a handful of beers can improve with age, in general, the fresher the better. A few breweries put the bottling date on the label, helping you keep your inventory fresh.

The world of beer is divided into two basic types: ales and lagers. Most of America’s craft market is currently focused on ales, which tend to be fruity and more complex. Ales are brewed in the following styles.

PALE ALE: One of the lightest-colored ales; medium body with a dry finish.

INDIA PALE ALE (IPA): Originally brewed by the English for export to India, new American versions pump up the hop flavor and alcohol; has herbal aromas with pronounced bitterness.

PORTER: A robust, full-bodied dark ale, porter is a complex brew with plenty of hops and chocolate or coffee notes. The style was invented in the 1700s by British bartenders who blended various ales for London’s thirsty porters.

STOUT: Even bigger and darker is Stout, with molasses and burnt notes. Substyles include: Dry (most famously Guinness), Sweet and Oatmeal.

BARLEYWINE: Big in body, flavor complexity and alcohol, these are meant for aging; some are vintage dated.

BELGIAN ALE: This is a category unto itself, from super-sour to fruity sweet. Major Belgian styles include: Flemish Brown, Lambic, Trappist, Abbey, Saison, Dubbel, Tripel and Wit.

WHEAT BEER: Many ales are made with a large proportion of wheat in the mash. Styles vary, but most are hazy golden in color with tutti-fruity flavors. They are refreshing and usually served with a lemon wedge.