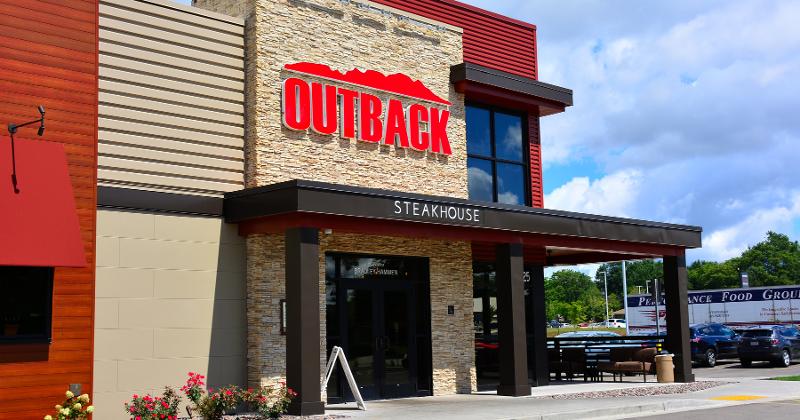 Bloomin’ Brands is paying more for just about everything these days.

On Friday, the owner of Outback Steakhouse and three other casual-dining chains reported that its restaurant-level operating margins had fallen nearly five points year over year, to 15.5% from 20.3%. It blamed the shrinkage on higher costs for commodities, utilities, supplies, wages, and repairs and maintenance.

It expects food costs to come down slightly in the second half of 2022, but nonetheless raised its guidance for full-year commodity inflation to 13%-14%.

“Our commodity inflation is higher than what we were thinking when we started the year,” CFO Chris Meyer told analysts Friday. “If you look at the back half, although there's pockets where I think we're seeing some good news in areas like beef, fuel prices and then some smaller commodities like chicken wings and things like that, we haven't seen a whole lot of upside find its way into our numbers thus far.”

A menu price increase of 5.8% in the first part of the year did not entirely offset those costs, and the company will likely take an additional 2% bump in Q3 or Q4, Meyer said, for an overall hike of about 7.5%.

That’s below the 8.9% menu price inflation for all full-service restaurants in June, and Bloomin’ wants to keep it that way. “We made a conscious decision to preserve our value equation and not raise prices to fully offset inflation,” CEO Dave Deno said.

So it’s also working to ease costs by making its restaurants more productive. It’s adding new technology and equipment, such as handheld server tablets, a new kitchen display system and new ovens and grills it hopes will do the trick.

So far, new equipment at about 140 Outbacks has allowed them to operate with fewer workers in the back-of-house and has improved order accuracy, Deno said. Table turns are also faster because the food is coming out sooner. Customer feedback on food and service have been better, too.

“We're very optimistic about it, but it's probably a little too early to provide some real specifics,” Deno said. “But we are seeing it in back-of-the-house labor and in our customer measures.”

Sales at Bloomin’s 1,164 U.S. restaurants did little to help margins in the quarter: Same-store sales fell 0.4% across its four concepts, including negative 1.1% at Outback, negative 1% at Carrabba's Italian Grill and negative 1.1% at Bonefish Grill. Executives blamed the declines on a “softer” June and difficult comparisons to last year, when customers were flush with stimulus money.

Fleming’s Prime Steakhouse was the lone Bloomin’ brand to grow in the period, with same-store sales up 6% year over year. And Outback’s 123 restaurants in Brazil did gangbusters, with sales up 95.7% compared to a year ago, when the country was in the thick of COVID-19.

In fact, the success of that market prompted Bloomin’ to bump up its revenue estimate for the year to as much as $4.45 billion, from $4.4 billion.

Off-premise has been another bright spot. Takeout and delivery made up 25% of U.S. sales in the quarter, down 1 percentage point from Q1. Third-party delivery actually grew, to 12% of sales from 11.5% the prior quarter.

“Off-premises remains sticky and is a large part of our ongoing success,” Meyer said.

And executives seemed confident that the overall sales decline was not a result of customers pulling back from higher prices. Average check was up 7.9% in the quarter, 2.1% of which was menu mix.

“We don't see consumers managing their checks at this point,” Deno said.