To say that Brown’s Chicken, a fast-casual chain with 29 locations in the Chicago area, was hit hard by the recession would be an understatement: Owing more than $10 million to creditors, the company filed for Chapter 11 bankruptcy in 2009. But last year the failed company was purchased by Pop-Grip LLC, and under the new management team, sales bounced back to pre-recession levels, with $14 million in revenues for 2010. Today, the company has three new franchises in the works. 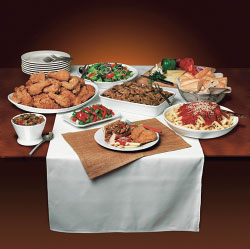 Brown’s Chicken’s secret weapon? A booming catering division. “We attribute a lot of our growth to catering being up,” says Tim Kennefick, the company’s president, noting that catering accounts for as much as a quarter of revenues during some periods. “Catering and in-house business play off each other: The greater your customer count, the greater the opportunity you have to sell your catering products to those same people.”

The converse is also true, he says: As people are exposed to Brown’s Chicken products at catered events, they’re more likely to visit the restaurant locations.

As the economy recovers, so does the catering business, as business travel, sales meetings and professional conventions increase. Non-business events—weddings, birthday parties and the like—are gaining steam as well. And while the catering industry grew by 9 percent in 2010, according to market research firm Packaged Facts, Brown’s Chicken increased catering revenues by 10 percent during the same period. The chain plans to double that figure in the next two years.

That’s in part because while people might seek bargains for their own meals out, they’re less inclined to be discount-minded when feeding others. Brown’s Chicken capitalizes on that trend by offering product incentives. For example, if a customer spends more than $200 on a catering order, he or she receives a free cheesecake. “Instead of discounting to drive traffic, we add value to our product,” says Kennefick. “Catering customers want to buy because of our product quality, not because we’re the cheapest.”

Brown’s Chicken advertises its catering service heavily to both business and individual catering customers, and incorporates its catering logo and tag line— “Brown’s catering is as easy as 1, 2, 3”—in its ads. Last winter, the company also launched a $25,000 ad campaign promoting holiday office catering and using a re-mastered version of its 1989 TV spot, which featured then-unknown Steve Carrell, now a movie star. The spots invited customers to nominate their bosses for a “world’s best boss” competition, and the winner received an office party catered by Brown’s Chicken.

The chain also reinforces its capabilities in menus and promotional displays that stay up year round. “The more often customers come into the restaurant, the more they see it,” says Kennefick. He’s betting that familiarity will lead to sales: “When they think about what they’re going to order for their catering, they’re going to think about our products.”

In the future, the chain plans to advertise its catering services even more prominently, with flat screen TVs featuring images of catered events and cuisine on restaurant walls.

Brown’s Chicken also plans to boost catering sales by revamping the ordering process with an easy-to-use online system. Customers will choose menu items and quantity, and the system will calculate a price. But, says Kennefick, “the customer is putting a lot of trust in you for these events. It’s important to maintain a personal connection.” So after the order is received, an employee will call the customer to verify the order and discuss event details.

Catering plays a significant role in Brown’s Chicken’s plans for continued business growth. One of the company’s three new locations is in the heart of Chicago’s business district—a prime spot to attract corporate catering business. What’s more, the chain now devotes 30 percent of its advertising budget to promote catering. “If those dollars do the right thing,” says Kennefick, “I’ll have a great return.”