Seafood is in high demand by Americans—total consumption rose by 45 million pounds in 2009 over 2008, states the National Fisheries Institute. Restaurants are doing their part to feed the trend, but they're continually grappling with price, supply, safety and sustainability issues. Despite these challenges, Mintel Menu Insights found that 9 percent more seafood is appearing on menus in 2010 than in 2009. And much of the activity is in appetizers, sandwiches and salads. That makes sense, with food costs up and diners pinching pennies, restaurants can deliver more value by menuing smaller portions. Here are other ways operators are meeting sourcing challenges. 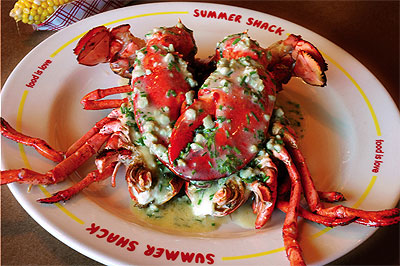 Strategy: Become your own supplier

To assure a consistent supply of top quality seafood, Jasper White founded Shack Foods of America—a wholesale operation that supplies fish to all six Summer Shacks, his catering facilities and about 20 other restaurants. The HACCP-certified operation is headed by Max Harvey, a seasoned seafood buyer who supervises sourcing, cutting and distribution. "We save money through quality control and economy of scale," notes Harvey. That said, "it hasn't been an easy time, as prices are high and will remain that way. Plus, freight has gone up consistently over the last year."

"Seafood prices are the best example of a supply and demand economy," confirms White. Right now, global demand is high and supply is unpredictable—weather, fishing quotas and other factors are all having an impact. To deal with market fluctuations, White's menu adapts to the most reasonably priced, highest quality fish of the day. Thursday may be tuna and cod; Friday, swordfish and snapper. But certain items must always appear on the menu. Pan Roasted Lobster, fried clams and oysters and clams on the half shell are Summer Shack signatures, and White buys these in large quantities. "Lobster prices went down for awhile during the recession, but now they're back up. Even so, we can't raise menu prices by much because our guests are still on tight budgets."

While many sustainability advocates are most concerned about overfishing certain species, White feels the big issue is clean water, stating "if it grows in the ocean, I will find a way to cook it."

De Rodriguez Ocean, Miami Beach, Florida
Before opening his new seafood restaurant, executive chef Douglas Rodriguez worked closely with his supplier, Florida's Finest Seafood, to research the best sustainable sources. To get a year-round supply for the 136-seat De Rodriguez Ocean, he knew he would have to supplement the local and wild supply with farmed species. "Florida's Finest is one of only six certified sustainable fish suppliers in the U.S., and they helped us choose purveyors from all over the world," says Rodriguez, adding that the quality and stewardship of aquaculture has improved dramatically.

Guests at De Rodriguez can choose from organic Scottish or Irish salmon, a low-moisture, dense-fleshed fish; sweet Laughing Boy shrimp from Belize, which is cleansed in a purging tank before shipping; Peruvian blue tilapia, a firm, snowy fish totally different from its Asian counterpart; Mediterranean farmed branzino; briny white warm-water clams from Florida; Prince Edward Island mussels; and farmed Kona lobsters. "The hardest part is educating customers on the sustainability of farmed seafood and its higher price tag," says Rodriguez. He intends to serve simply prepared fish and shellfish a la carte, with a choice of different sauces and sides, steakhouse-style.

He's noticed that the economy has spurred people to order appetizers as a meal. "Patrons can try new flavor profiles at a lower price," he explains, "and we get a chance to do ‘market research.' If something works, we'll apply it to an entrée."

The daily chalkboard at each of Fish City's 23 units accommodates seasonal buys. "The GMs have the liberty to choose several specials of the day at their location," says Bayne. "About 30 percent of sales come from the chalkboard. These prices are a little higher but still $2 to $3 lower than the competition." Bayne is able to keep most costs in check by locking in contracts—he's worked primarily with one distributor since 1991. He buys both wild and farmed seafood; from domestic sources as well as South America and Asia. By dealing with a "supplier with integrity" he knows that "we're getting a ‘vetted' seafood supply from well-managed waters and fisheries."