A few years ago, Daniel Orr, chef-owner of FARMbloomington restaurant in Bloomington, Indiana, started a corny tradition on the weekend nearest his August 23rd birthday. The CORNfest is now an annual event that celebrates the bounty of local sweet corn. 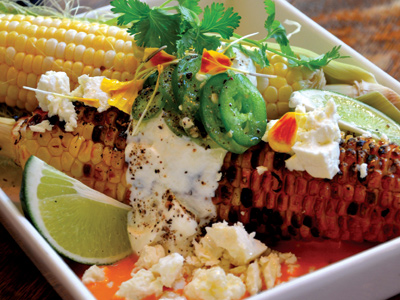 “CORNfest runs from Friday through Sunday, with an outdoor food fair, a tasting menu, a hoedown dance and a Sunday morning cornmeal pancake fundraiser,” says Orr. Street eats include ears of grilled corn with Mexican mayonnaise and chilies, house-made tamales and corn dogs made with local franks, while the fine-dining tasting menu has featured a summer golden vegetable soup of corn, yellow tomatoes and squash and corn ice cream with caramelized candy corn. There’s also a corn-themed small plates menu.

But FARMbloomington doesn’t live by corn alone during an Indiana summer. “Neighbors come up and throw zucchini, squash blossoms, cucumbers and more at the doorstep,” claims Orr. The chef also has a large garden at his country house in Columbus, Indiana, where he harvests salad greens, long beans, squash, figs, gooseberries and more. A specialty of the house is crispy Long Bean Tempura with a spicy dipping sauce.

In addition, the restaurant boasts a terrace planted with herbs. These find their way into the kitchen as well as the bar. “The bartenders snip right from the pots to create signature cocktails like the Basil Lemondrop and Summer Thyme,” Orr reports.

Still more produce is sourced from Kolb Homestead near Evansville, Indiana, where Orr  installed one of his former chefs as farmer. Beside fruits and vegetables, 60 acres is dedicated to raising chickens, ducks, goats and pigs destined for FARMbloomington’s menu. “We’re also putting in a pizza oven at the farm and we’ll be making pizzas with fresh vegetables from our fields,” says Orr. And he’s planning a 15,000- square-foot brewery, where persimmon and pawpaw beer will be brewed from local produce.

Indiana’s farms yield plenty of produce through the fall, with squashes, nuts, kohlrabi and root vegetables available until Christmas. “We also have regional suppliers that get us locally grown foods from a three- to four-state area,” he adds. “This makes the season longer for things like asparagus.”