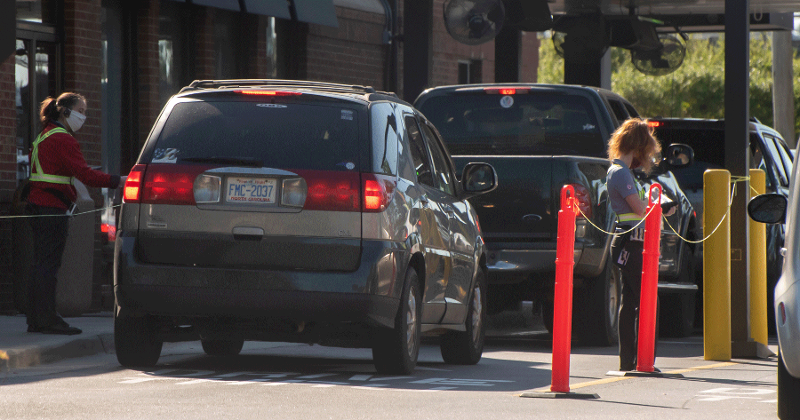 Restaurant sales rose 7% last week, the first positive reading for the sector since the quarantine began in March, according to the latest index from the data firm Facteus.

In theory, such numbers should not be improving. After all, we are still in the midst of a pandemic. There are a lot fewer restaurants to spend money at. And Congress has yet to approve a renewed stimulus, effectively ending $600 in excess weekly unemployment benefits that have helped to backstop spending.

For an explanation, we turn to a company outside of the industry, Target, which just reported historically strong sales. CEO Brian Cornell told investors on Wednesday that sales have been “running in the low double digits” so far this month, according to a transcript on the financial services site Sentieo.

In other words, people have cut spending in a lot of areas, so they might as well buy some stuff at Target.

The same could hold true for restaurants. Remember: A lot of restaurants are closed and many of those that are open are only at partial capacity. The overall industry supply remains down. Those concepts that are left have been beneficiaries.

But Facteus data is also helpful here, too. Per Cornell’s point, sales at retail have thrived, up 37% during the week ended Aug. 16. Similarly, drug stores and pharmacies are up, too, 23% last week.

Yet every other major area is down.

Travel spending is down 40%, including a 63% decline at airlines and an 81% decline at cruise lines.

Consumers are instead spending on video games (up 80%). And, of course, they’re going out to eat, shifting a lot of spending toward fast-food restaurants and, apparently, more traditional restaurants.

Americans are accustomed to spending more than half of their food dollar at restaurants, and they’ve reverted back to that mean since the outset of the pandemic.

Still, the economy remains a problem—more than 1 million Americans filed new unemployment claims last week, for instance, and more companies are making layoffs permanent, like HMSHost is doing. There remains considerable uncertainty, and the loss of that stimulus could still put a dent in restaurant spending.

But at least for now, consumers are eating out. Even if they’re actually taking it home.