Andre Vener spends a lot of time on delivery. He is responsible for the strategy used by fast-casual chain Dog Haus, where he is a partner and has researched the service heavily for the past couple of years, attending conferences and talking with other franchises.

He rarely finds agreement on the right approach.

“I’ll ask 10 of my favorite franchisors, ‘What are you guys doing with delivery?’ But nobody really has the same answer or the same play,” he said.

Delivery strategies are as varied as the companies themselves, from no-delivery holdouts such as Texas Roadhouse to all-in approaches such as Bloomin’ Brands. Companies use single providers, multiple providers and deploy their own services.

But for all of these differences, there is widespread agreement that the restaurant industry has to get this right. While there remains a big question of how big delivery will really get, the potential that it could shift a lot of traffic—and profit—has the attention of every executive in the business.

Many of these executives have seen what has happened in other industries—notably retail—as internet-based competitors have moved in and changed things.

“I’ve seen predictions that $200 billion in restaurant sales will come through digital channels, with 70% coming through marketplaces, by 2022,” said Noah Glass, founder of online ordering company Olo. “You do the math and that’s a $140 billion market, with 25% commissions. So that’s $35 billion of profit that gets extracted from restaurants to marketplaces.

“What is the profitability overall on an industry with $800 billion in top line sales? Maybe it’s something like $100 billion. So that means more than a third of restaurant profits are getting extracted by this thing. Nothing like it has ever happened to this industry.”

One way the business is evolving is through the number of delivery providers. More chains are eschewing exclusivity in favor of multiprovider deals.

Jersey Mike’s began delivering its subs in 2018, using a marketing agreement with Uber Eats to get the word out. Since then, however, it has been using just about any service it deems credible in a bid to expand the service and reach as many customers as possible.

“We don’t see the point in excluding any of them,” said Dave Altmann, senior vice president of strategic initiatives for the sandwich chain. 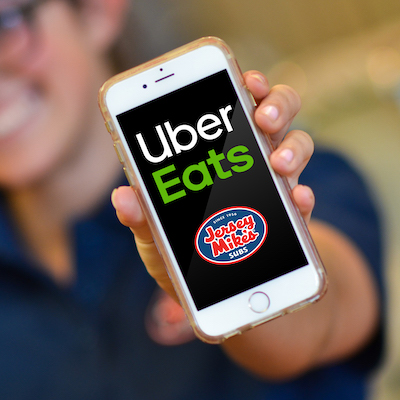 Single-provider systems can be confusing, Glass noted, because customers don’t always know where to go.

And there is a growing sense that delivery providers are getting some customer loyalty. “The aggregators tend to have sticky customers,” said David Gibbs, president of Taco Bell and KFC owner Yum Brands, at a conference last month, according to a transcript on financial services site Sentieo.

Many providers are stronger in some regions of the country than others. And phone space means many consumers will only use a couple, rather than all of them. As such, more chains think it’s important to broaden their reach.

“Consumers tend to have one or two platforms on their phone,” Jersey Mike’s President Hoyt Jones said. “They’re not exclusive to one, but they just have one or two. And there are dominant delivery players in each market. We felt like we needed to have relationships with as many as possible.”

Self-delivery? Or no delivery?

Another example of the varying nature of delivery came recently when Chili’s announced that it would add delivery at its restaurants through an exclusive deal with DoorDash—just days after franchisee Greg Flynn said he was testing no delivery at his Applebee’s units in three markets.

In April, Brinker International CEO Wyman Roberts said the company was talking with potential partners for delivering at his company’s Chili’s restaurants. Many of those conversations were over data and leveraging the companies’ respective databases.

“It’s not that we’ve never doubted the potential of delivery,” Roberts said, according to a Sentieo transcript. “It’s just always been: ‘How does this work in our restaurants and how do we make some money off that as well?’”

On the other hand, if the service can’t generate profits for the restaurant, it’s not worth it, Flynn said in May. “We may be in a good position to take business” away from grocers, he said. “But for that to be attractive to us, given that there is lower incrementality and it’s disruptive to our dine-in business, it needs to be a margin-neutral channel.”

On the very much pro-delivery side of the spectrum, however, are Panera Bread, Bloomin’ Brands and 21-unit Dos Toros, which have all gone the self-delivery route. Self-delivery services enable companies to tweak the offerings themselves to see what works. “We can make changes that can enhance the profitability or enhance the experience for our guests,” Bloomin’ Brands CFO Christopher Meyer said in April.

And then there is Sweetgreen, which bought Washington, D.C.-area meal delivery company Galley and installed its CEO as the company’s new vice president of logistics—promising an altogether different approach.

Sweetgreen’s salad-centric menu enables it to explore more radical delivery approaches, similar to the way Jimmy John’s can deliver its cold sandwiches or Panera Bread its baked goods. Companies with cold or nonperishable menu items have automatic advantages and can explore different avenues for delivery than can companies with hot items.

“It differs based on food type,” Glass, of Olo, said. “Food hold time is destiny.”

But the varying strategies are also an indication of the early-stage nature of the delivery business—and how different this system really is.

Delivery historically was done by pizza or Chinese chains that could deliver multiple orders on a run, which enabled them to deliver more efficiently and at a lower cost.

In this case, third-party providers deliver a single order in a single trip, which is less efficient and costs more, requiring them to charge commissions as high as 30% per order. “It’s a radically different economic transaction,” Glass said.

Demand for efficiency is leading companies such as Uber to explore delivery through drones. But for a restaurant industry grappling with the idea of a service that adds a cost equivalent to labor and food, there has been no obvious solution.

Some large companies, such as Chipotle Mexican Grill, have been able to use delivery as a strong marketing component—the Newport Beach, Calif.-based chain has used the service effectively to help same-store sales growth in the past two quarters.

Chipotle executives have also said that their second makeline for digital orders enables the company to serve delivery customers with the same profit margin as other customers.

Yum Brands, meanwhile, invested $200 million in Grubhub last year, which helped that company get a favorable 12.5% commission for its Taco Bell and KFC restaurants, along with concessions on data and consumer charges. That has been a big tailwind for Taco Bell operators as the chain has marketed delivery this year.

Not all companies can do this, however, and as Flynn’s no-delivery Applebee’s test indicates, some brands are still struggling to find the right code for generating margins on delivery orders.

And the sense among many entrepreneurs that delivery as a service is growing, and that customers like their specific vendors, is putting pressure on executives to find that code.

Which brings us to Vener, whose 35-unit Dog Haus features technology and delivery as part of its DNA. Its aggressiveness was on display earlier this year when it reached a deal with ghost-kitchen provider Kitchen United.

Dog Haus will often use discounts and other deals to get customers to order its food on third-party delivery apps.

But when the chain’s restaurants get busy, the company will turn the third-party services off.

“If we see the restaurant has a deep line and the kitchen is full, we’ll turn those off,” he said. “We want to make sure people have a good experience. And we don’t want food sitting any longer than it needs. We don’t feel a customer should wait 45 minutes to an hour for their food.

“We would rather not be available than give a half-assed experience.”

The company will never turn off the delivery service on its mobile app and website, where the high delivery commissions are not a problem. And in that way, Dog Haus gives the customers that use its in-house ordering mechanisms the same treatment, whether they are in the store or online.

And third-party delivery customers are used for marketing purposes, and to get business in the doors during slow periods.

“Everybody hates it when I say this because margins are everything in the restaurant business, but you can’t deposit a percentage to the bank,” Vener said. “If you have your labor there, and you’re paying rent, you basically just have food costs on that order.

“To me, it’s a plus. You have to be extremely competitive with what’s out there.”