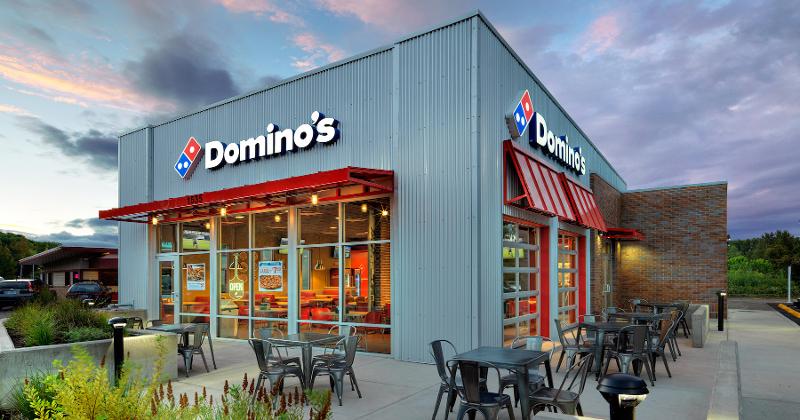 The company said its U.S. same-store sales rose 3.4% in the last three months of 2019, easily besting expectations from investors and analysts that expected a continued slowdown in the key metric.

The company’s slowing sales in prior quarters, including negative same-store sales on delivery orders, had worried investors who believed third-party services were a growing competitive threat.

Yet same-store sales on delivery orders improved in the fourth quarter, while the chain’s growing carryout business continued to accelerate.

The stock hit an all-time high of $380 per share Thursday before settling in the $370 range.

Speaking on their fourth quarter earnings call Thursday, Domino’s executives said the promotional activity from third-party delivery players appears to have leveled off, even as it remains “intense.”

“Certainly, we still saw a lot of aggregator promotion and advertising activity,” CEO Ritch Allison said. “We felt like that leveled off a bit relative to the third quarter, but that pressure is still there and quite intense.”

Domino’s executives credited some of the company’s efforts in the quarter, notably its “delivery insurance” promotion guaranteeing a quality experience on delivery orders. The program “resonated well” with customers, they said.

Allison acknowledged some things that didn’t work, notably its late-night promotional program, though he said it drove sales in certain markets.

Domino’s domestic same-store sales have risen for 35 straight quarters. The company hasn’t had a negative comparable-store number since 2011. That period has turned Domino’s into the biggest pizza chain in the world and one of the strongest-growing large restaurant brands of any kind.

Globally, Domino’s added 1,106 units over the past year, reaching 17,000 worldwide. In the U.S., the company added 250 restaurants, reaching 6,126. The company has been “fortressing” markets or building more stores closer together.

Domino’s strong sales growth has been good for the company’s domestic operators. The company said that restaurant-level earnings before interest, taxes, depreciation and amortization for franchisees would be “more toward the high end” of its predicted range of $136,000 to $139,000.

Yet Allison acknowledged “challenges” in the operating environment as labor and fixed costs continue to rise. He said that the company is “intensely focused on helping to drive efficiency and profitability at a store level for franchisees.”

“It’s a really tough environment from a profitability standpoint,” Allison said. “If we were not growing our sales, profit would be declining.”

Allison made numerous references to profits of the company’s third-party delivery competitors, which spent much of 2019 offering more deals to generate user growth.

He said the company faced “an unprecedented acceleration of competitive activity around delivery. Our alignment and focus on the system is more important than ever as we face new competitors that are not bound by the constraints and requirements associated with a profitable business model.”

Allison believes the promotional environment will continue this year, even as profit pressures on third-party delivery players continue.

“We don’t know how these folks are going to behave,” he said, noting that the company is still expecting delivery promotions to influence its sales. “They’re standing in a circular firing squad right now. They’re going to keep advertising, continue to keep discounting, because they don’t have a choice.

“We’re not standing in the circle. But we might get hit by a few stray bullets.”