At Karyn’s on Green in Chicago, one of chef John Gorecki’s signature dishes is a $15 crab cake. He seasons the cake with ginger, shallots, chives and chili flakes, pan-sears it and serves it over black eyed peas and quinoa succotash. 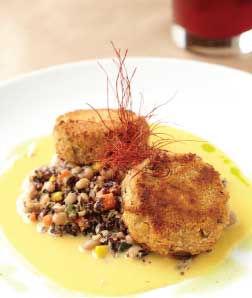 What’s different about his crab cake is that no animals were harmed in its production. Karyn’s is a vegan restaurant, and the “crab,” from MATCH of St. Louis, is made from texturized soy protein and wheat gluten. Says Gorecki, “I hear from people who haven’t eaten seafood for years, ‘It’s freaking me out. It tastes too real.’”

MATCH is one of several young brands that is redefining mock meats. Unlike older veggie-burgers and soy dogs, say some restaurateurs, many new plant proteins come surprisingly close to the taste, texture and nutritional value of animal flesh. They won’t replace a slab of steak, but breaded or stir-fried, they can be hard to tell from a chicken nugget.

Unlike stereotyped veggie fare, these meat alternatives are being served on chic menus. They’re fueling a new style of vegetarian cooking aimed at non-vegetarians.

“The real market is the flexitarian, someone who wants to eat a couple of meals a week that don’t include meat,” says vegan chef Tal Ronnen. “But they want to include a center-of-the-plate protein that’s filling.”

“It debunks the myth about vegetarian food as having no flavor,” says Ron Biskin, president of the vegan Native Foods Café of Chicago, with 11 locations. He makes several styles of seitan or wheat gluten in-house, such as a mock corned beef marinated in beet juice and juniper berries. “The majority of our customers are not necessarily vegan or vegetarian. They just like the flavor of the food.”

The new breed of faux meats uses ingredients beyond soy and wheat. Gardein beefs up its protein content with flour from quinoa and amaranth. Quorn, a British import, ferments the root-like mycelium of the fungus Fusarium venenatum.

“The thing about [fungus-derived] mycoprotein is that the strands replicate chicken fiber, so you get that bite,” says David Wilson, general manager for Quorn’s U.S. office in Westport, Connecticut.

Another way to mimic muscle fibers is through the cooking process. At the University of Missouri in Columbia, food science professor Fung-Hu Hsieh heats and pushes a powdered soy dough through an extruder, which stratifies proteins into lines. “You can see distinct fiber formation,” says Hsieh. “You can peel it off, like a piece of chicken.” The university has licensed his process to Savage River Farms of Cumberland, Maryland.

Such products may replace meat, but they don’t always cook like meat, chefs caution. To prevent burning, oil must sometimes be added, to replace the fat that’s not there. And most of the products are essentially pre-cooked. “It’s more of a heat-and-serve than a cooked item,” says Wilson.

Beyond taste, fans of faux meat tout the environmental and animal welfare benefits of growing less of the real stuff. “People know that eating meats has devastating environmental consequences,” says Ingrid Newkirk, president of People for the Ethical Treatment of Animals. “They know it can contribute to heart disease and cancer. But it’s hard for many people who grew up eating meat to shake the taste. So it’s wonderful if they can have everything they want, without the bad bits.”

On the scientific horizon may be a very different kind of meat alternative: “cultured” or “in-vitro” meat that’s grown in a lab, from animal stem cells, without slaughtering an animal. PETA is offering a $1 million prize for the first commercially available chicken. Seven research groups are working towards the goal.

One such group is Modern Meadow of Columbia, Missouri. Founded by the scientists behind the biotech company Organovo, which creates human tissues for medical uses, it extends the technology to animals.

Modern Meadow and other groups have already engineered—and eaten—small strips of meat. CEO Andras Forgacs forecasts it may take five to 10 years for any plate-sized products to be mass-produced and win regulatory approval. Along the way, he hopes to consult a few foodservice professionals.

“You want very much to design a product with the consumer in mind,” he says. “The path between where we are today and the mass market is to work with high-end chefs, culinary early adopters who ... can embrace this novel ingredient and ... experiment with it.”