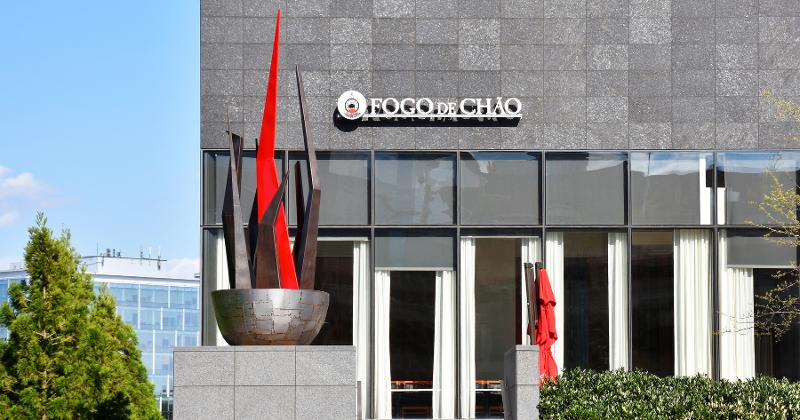 The numbers are enough to make the average restaurant-industry observer do a double take.

After being laid low in 2020 by a pandemic that took a big bite out of sit-down restaurants, Brazilian steakhouse chain Fogo de Chao has not only returned to pre-pandemic benchmarks, but by some measures is far exceeding them.

Now, the 60-unit chain plans to go public, and filed IPO documents Wednesday that provide a glimpse into its recovery.

The highly experiential chain known for its gauchos who carve grilled meats tableside saw same-store sales plummet by as much as 95% during the early months of the pandemic, and then again last winter when COVID-19 cases spiked. But in March of 2021, as the country’s vaccination rate started to climb, so did Fogo’s sales—by 17% compared to March 2019.

Its two-year comps continued to grow from there, peaking at an eye-popping 51% in June.

Cooped-up customers, it seems, couldn’t wait to get themselves some skewered meats.

“This recovery has been driven largely by a strong rebound in guest traffic as pandemic conditions have moderated,” the chain said in its IPO filing.

It mirrors a pattern reported by other higher-end casual chains and steakhouses recently. The Capital Grille and Eddie V’s Prime Seafood, the two upscale concepts owned by Darden Restaurants, generated same-store sales increases of 24% over the summer. Texas Roadhouse saw a similar increase—22%—at company-operated stores in the quarter that ended in September.

Fogo de Chao did even better: Same-store sales for the three months ending in October rose an average of 34.7% on a two-year basis.

“People want to go out, they’re going out in groups, people haven’t seen their friends in 12 to 14 months,” said Joe Pawlak, managing principal with Technomic, in an interview last month. “That certainly is very conducive to that higher check-average occasion.”

The chain’s stores have averaged 122,000 guests per restaurant during the 52 weeks ending Oct. 3—a period that includes five months in which it had not fully recovered. In 2019, its average guest count was 129,000.

Fogo said its fixed-price, all-you-can-eat service model helps boost traffic by getting customers in and out faster. Guests can sit down and start eating right away, filling up their plates from the buffet-style Market Table and ordering meat from gauchos who circulate through the dining room.

Its traffic and sales are also coming off of a larger base of restaurants than before the pandemic. It has opened a net three stores since 2019, all of which it said are outperforming expectations. New Fogo de Chao stores typically take about three years to stabilize, but by October, the three restaurants opened in 2020 were generating weekly average sales of $169,000, right in step with the rest of the chain.

Those new restaurants are also smaller, measuring 9,100 square feet instead of the average 10,600.

All of that has Plano, Texas-based Fogo de Chao feeling optimistic: It believes it can grow to at least 300 restaurants in the U.S. over the next 20 years.