The opening kickoff to the regular NFL football season is Sept. 4, but some restaurants and bars have established themselves as the fan-favorite gathering spot months ahead. Now that every other venue offers big screen TVs and half-price beers, it’s crucial to start building a loyal customer base early through strategic promotions. And there’s still time to snag sports fans, as football fever really heats up with preseason August games. 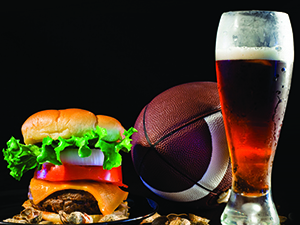 Each of the four years since Hooters began its annual fantasy football promotion, the number of groups that throw their watch parties at the 430-unit, Atlanta-based chain has doubled, says Andrew Pudduck, vice president of marketing. This year, Hooters started to hype the promotional program in June to woo fantasy football “commissioners” via a video featuring Jon Gruden, former NFL head coach and current NFL analyst for ESPN, along with Joey Chestnut, Hooter’s official Wing-Eating World Champion. The goal was to encourage the fantasy team organizers to start planning  events for the season early. The chain rolled out  the website hootersdraftparty.com to lure teams to reserve a spot at Hooters for their draft parties. “This year, we will give away championship rings to thank top commissioners who bring their team in the most times once the season gets underway,” Pudduck says.

A quick start is equally important to bars that host college football parties. The single-unit Houston sports bar Stats began courting college alumni-group presidents in June with a letter encouraging them to conduct their watch parties there, offering special treatment and discounts if they do. Once a college alumni group locks in, “they will do as much work to promote it as you do, by playing up the bar on their Facebook page, for example,” says owner Tate Powers.

Among the perks, Stats brings in the alumni group’s favorite beer, provides a 10 to 25 percent discount off the entire tab if their team wins and creates a special shot with the school colors that it sells for $1 whenever the home team scores a touchdown.

Nick Fosberg, owner of Caseys Pub in Loves Park, Ill., draws an early football-season crowd by promoting a raffle to give away Chicago Bears tickets or a 52-inch flat-screen TV during the first few weeks of football season. On game days, customers receive a raffle ticket when they purchase a full-price meal and a ticket for each drink purchase. They must be present to win when the winning number is drawn at the end of the game.

“We see an additional 50 to 75 customers and a 25 to 50 percent increase in sales on those days as a result of the ticket giveaways,” says Fosberg. To get the most benefit for his business, Fosberg collects the contact information for each raffle entrant, thus building his database. “I market directly to people who have given us their information. We get a much higher return on our marketing dollars,” he says.