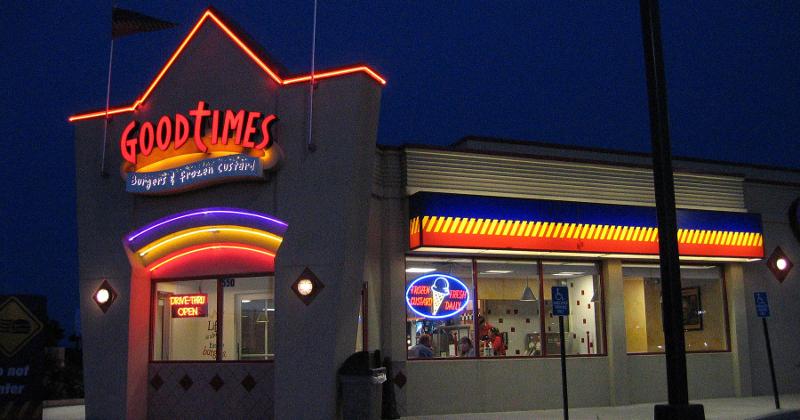 The swing in same-store sales for Good Times Burgers & Frozen Custard and its sister concept, Bad Daddy’s Burger Bar, were nearly identical for the month of June, according to the emerging chains’ parent, Good Times Restaurants. But the shifts were in opposite directions, starkly illustrating the differences in the experiences of limited-service and full-service operations during the COVID-19 pandemic.

Good Times, a 34-unit string of fast-casual restaurants concentrated in Colorado, posted a 18.1% spike in comparable unit sales for the month. Bad Daddy’s, a collection of 35 full-service casual restaurants with a wider geographic distribution, suffered a 17.8% drop in unit sales, which left it with a 36.1% freefall in comps for the third quarter ended June 31. The Good Times brand, which specializes in natural ingredients, posted a 11.9% gain for the three months.

The figures underscore how navigable the coronavirus crisis has been for restaurants that were built for grab and go business, with drive-thrus and counter service. Bad Daddy’s, the newer addition to Good Times’ fold, was conceived as a place where customers could kick back, sample some beers and indulge in a burger at the bar as they listened to music on the sound system. Stay-at-home warnings and state directives to shut restaurant dining rooms squarely undercut that mission. In April, when the crisis was at a peak, Bad Daddy’s comps fell 56.1%.

Most of the restaurants in both chains are operated by the brands’ parent. The company acknowledged in a business update released today that the $11.6 million loan secured through the Paycheck Protection Program (PPP) enabled Bad Daddy’s to pay employees and staff up dining rooms as units restored their on-premise service.

“During the third quarter, we took essential steps to preserve our business in the short term, while at the same time retaining the character and soul of each concept that is critical for our long-term success,” Good Times CEO Ryan Zink said in a statement.

The company ended the quarter with its vendors paid and $600,000 in rent either deferred or the focus of ongoing negotiations with landlords.  It specified that it has not yet spent all of the money it borrowed through the PPP, and has a total of $12 million in cash on hand. Management also noted that Good Times intends to seek forgiveness of the $11.6 million it borrowed under the federal loan program.

“The full ramifications of COVID-19 on the restaurant industry remain to be seen, especially in light of recent increases in coronavirus case counts across the country,” said Zink, who was named CEO in April, while the pandemic was still unfolding. He had held the job on an interim basis for the prior six months. “The actions we took during our third quarter have provided us increased financial and operating flexibility, which will be necessary as the pandemic and its effects on society and our business continue to evolve and be understood.”

Good Times did not reveal its net revenues and profits for the third quarter in the business update released Tuesday. It lost $14.7 million during its second quarter, compared with a loss of $180,000 for the year-ago period.