It’s Tuesday. At Vive La Crepe in New York City, the weekend crowd has faded away, and traffic is light. “Traditionally, there’s a 45 to 50 percent drop in business in the restaurant on Tuesdays,” says Marco Shalma, director of operations for the restaurant’s parent, MYT Partners. To get customers in the door, Vive La Crepe harnessed its app—that pipeline to customers’ pockets—and began pushing promotions out to its 14,000 users via mobile. On Tuesdays, the sell is $5 chocolate-hazelnut crepes. A coupon pops up in the app for that day only. The key was pushing an already-hot item. “Within six months, Tuesday turned out to be our strongest weekday. Even though the crepe was discounted, our overall sales increased 130 percent due to more volume of sales and sales of complementary items,” says Shalma. 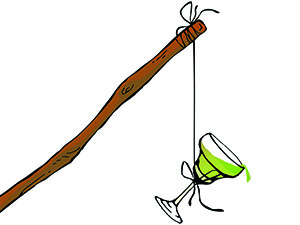 The slow times echo a familiar story for many restaurants. But the solutions don’t lie only in discounting, and they needn’t be high-tech. Iron Cactus Mexican Grill and Margarita Bar, with five locations in Texas, uses social media and email to attract diners during midafternoon and late evening lulls. But one of its most successful efforts involves handshakes. “We’re taking more of a grassroots approach and going around meeting people in our vicinity. We ask our general managers to go shake hands, and let people know who we are and personally invite them in,” says Steve Clemens, director of operations.

Iron Cactus’ managers focus on other service professionals, such as store employees, boat captains and hotel staff near its San Antonio River Walk location. “It has a direct impact on our off-peak times,” says Clemens, who estimates a sales bump of about 10 percent as a result. “This is because most people that work in the hospitality industry are also working during the busiest times, but they are finishing their shifts and looking for a place to have a bite and a drink.”

In New Orleans, off-nights extend for weeks in late summer when tourism is at a crawl and locals leave town to escape the hot weather. Courting concierges is an old tactic, but Ti Martin, co-proprietor of the Commander’s Family of Restaurants, has taken it further at her restaurant SoBou. Martin partners with the W French Quarter hotel next door to host free movies on Sunday nights in the hotel’s courtyard while offering special dinner packages and cocktails. She’s pleased with how popular the events are; customers are calling ahead to make reservations and filling up the courtyard. “On those nights, we’re having a 25 percent uptick in business,” she says.