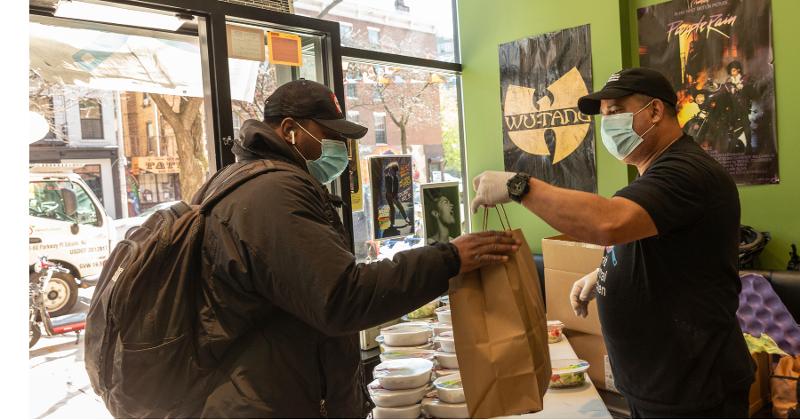 Billionaire Jeff Bezos returned to earth from his controversial jaunt into space Tuesday with a commemorative present for chef and humanitarian Jose Andres: a gift of $100 million.

The restaurateur said he would use the money to fund his World Central Kitchen, a charity that serves meals at disaster sites for the displaced and rescue workers. The organization embarked this week to areas in Europe where flooding from extraordinary rains have killed more than 200 people and left many more homeless

The money was awarded under a new philanthropy created by Bezos called the Courage & Civility Award. The program aims to fund “leaders who aim high and do so with courage, and always do so with civility,” Bezos said at a press conference called to provide the media with details of his 11-minute ride into space. He tacked the announcement of the new award onto the media gathering, indicating that he wanted it to be a surprise.

Bezos usually tops lists of the world’s wealthiest individuals. He made his fortune as the founder and longtime CEO of Amazon, which he currently serves as chairman.

He has been criticized for spending an estimated $5.5 billion on his Blue Origin space initiative, a pet project that aims to offer space trips only the ultra-rich can afford. A passenger seat on his flight Tuesday was auctioned off to an unnamed bidder for $28 million but wasn’t claimed. Progressives such as Sen. Bernie Saunders have blasted the program and Bezos for providing such high-ticket entertainment instead of helping those in need.

“We live in a world where sometimes, instead of disagreeing with someone’s ideas, we question their character and their motives,” Bezos said in announcing his new award, reading from a piece of paper he withdrew from a pocket of his spacesuit. “The Courage & Civility Award is a $100 million award so the awardee can give $100 million to the charities, the non-profits, of their choice.”

“This award itself cannot fix the world on its own, but it opens a new chapter for us,” Andres, the chef-owner of tapas-style restaurants such as Jaleo, said in joining Bezos on stage at the press conference. He, Jones and the conference’s emcee were the only ones on the stage not in a flight suit.

“Now is the time to think really big,” Andres said. “We want to revolutionize the nature of hunger relief. A plate of food is a plate of hope.”

He told Bezos that his mission was to “build longer tables, not higher walls.

“We will absolutely shoot for the stars, Jeff,” Andres said.