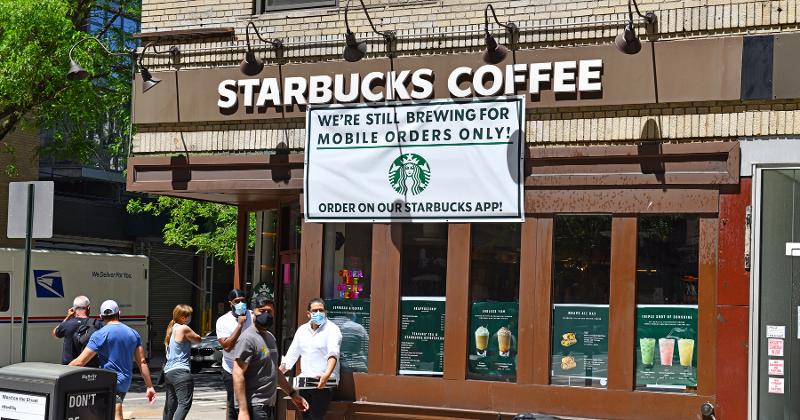 As its sales began taking a serious hit in 2008 from what was then the worst U.S. recession in 80 years, Starbucks began closing locations. It closed 650 global locations that year. It closed another 300 the year after.

It’d be easy to say it’s worse now. After all, same-store sales were expected to decline as much as 19% in the U.S. last month and 17% for this fiscal year. The worst quarterly result back in 2008 was a decline of 10%.

Yet company executives believe they have a lot more advantages this time around that should set them up for a faster recovery.

“Today, we have an industry-leading digital platform and a rewards program that didn’t exist back in 2008, 2009,” CFO Patrick Grismer said last week. “That’s an important part of our competitive advantage and gives us more resilience today compared to 10 years ago.”

The Seattle-based coffee giant plans to lean heavily on its Starbucks Rewards members as it hopes to climb out of the pandemic. But it’s hardly the only thing. The company’s strategy is a veritable overhaul that also involves its menu and real estate and has the potential to alter how and when customers use Starbucks.

The company’s store base is in for arguably the biggest change. Starbucks has already announced its strategies to shift development towards more drive-thru units, while shifting its focus on core urban markets toward a larger selection of takeout locations and fewer traditional restaurants.

Numbers during the pandemic have illustrated the way consumers have changed their habits.

In April, Starbucks opted to close stores that didn’t have drive-thrus. For those stores that remained open, performance has already recovered: Those stores’ same-store sales were down 14% in May but by last month were up 2%. Given the overall sales decline in the U.S. last month, that suggests non-drive-thru stores were down significantly.

Many urban stores can’t exactly add drive-thru windows, and those locations have been hit hard as more consumers work from home.

Yet Starbucks is hopeful that a shift in its urban strategy could help that effort. The company has announced a strategy to shift toward more takeout-focused Pickup locations. That move could result in the closure of as many as 400 locations.

Starbucks is also quickly expanding curbside service, a service it didn’t need a few months ago but which is now in close to 1,000 locations.

“We’re really comfortable that we now have so many different channels to our business,” Chief Operating Officer Roz Brewer said. “We feel this new agility and resilience that we’ve built into the business will allow us to look at that morning daypart, adjust to the transitions we’re seeing in mid-morning, early afternoon, and then bring in a new customer base.”

The loyalty program is playing a key role.

It’s notable that the number of  Starbucks Rewards members in the U.S. who had been active in the last 90 days declined 5% year-over-year , due to “reduced customer frequency” because of store closures and other coronavirus impacts, according to the company’s riscal third quarter earnings report.

But in comments to investors, executives said they gained 3 million new app users, and that sales growth among those customers turned positive in July.

The company now wants to expand the program’s reach to enable members to pay any way they want.

Starbucks believes that could broaden the program’s reach but also get existing loyalty members more involved. “These are the kinds of initiatives that will make a difference as we try to regain the most important parts of our business,” Brewer said. “And we’ll be watching the customer patterns very carefully and adjusting.”

Among the more interesting strategies is Starbucks’ menu. The coffee giant, relatively quiet on the plant-based food front before the coronavirus, is now fully on board that bandwagon. Starbucks in June introduced the Impossible Breakfast Sandwich, for instance, and also introduced a non-dairy cold foam platform for its beverages.

Future efforts will include a plant-based protein box for the afternoons. And it has Beyond Meat in Canada and China.

“Until there’s a vaccine, we just realized that we’ve got to focus on those experiences that customers optimize around whether they’re working from home or not, which are safe, familiar and convenient,” CEO Kevin Johnson said.