When the first Europeans landed in America, the natives they encountered relied on three staple crops—corn, beans and squash—along with wild berries, fruits and other plants. Fishing and hunting filled out their meals. As Native Americans became displaced during America’s westward expansion, many culinary traditions were abandoned. Today, some preservationists, farmers, chefs and cooking schools are trying to revive that food culture. 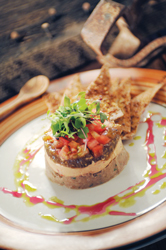 “These ingredients grow under drought conditions, so the beans and squash are very dry and earthy tasting,” Harvey explains. “They inherit the flavors of whatever you cook with them.” He uses white tepary beans in a stew made with tomatillo broth and squash, and brown teparies in a spicy BBQ beans dish with chorizo. Harvey also sources TOCA’s saguaro syrup, made from cactus blossoms. “The color is vibrant magenta and flavor is comparable to balsamic vinegar with a  molasses finish. I use the syrup in a demiglace for steak and splash it on salads,” he says. Speaking of steak, some of the beef Harvey sources is from the reservation’s jojoba-fed cattle.

While some chefs are reinterpreting Native American ingredients, others advocate a more traditional approach. Freddie Bitsoie, a trained culinarian and member of the Dine tribe of the Navajo nation, feels that just because a dish uses native ingredients doesn’t mean it’s true Native American cuisine—it should be called “Native-inspired.” As the director of the Native American Program at the Classic Cooking Academy in Scottsdale, he wants every tribe respected for its culturally specific foods and uniqueness.

Like the Tohono O’odham, several tribes are forging their identities by marketing their products and helping restaurants menu authentic dishes. The Seminoles of Florida launched their own brand of beef and began selling it to the Hard Rock Café. Teaming up with other cattle-ranching tribes and distributing through US Foodservice, they are able to deliver a consistent supply.

Amaranth: A weed-like plant; its seeds are ground into flour

Anasazi beans: Speckled dry beans that were cultivated by the ancient Anasazi Indians of the Southwest

Cholla buds: Harvested from the Buckhorn cholla cactus, these buds taste slightly bitter with a hint of citrus

Lakota squash: A winter squash once prized by the Lakota tribe for its nutty, sweet flavor

Prickly pear: Also called “cactus pear,” this fruit has a prickly skin and the aroma of melons

Saguaro syrup: A product made from painstakingly harvested cactus blossoms that are cooked down to a concentrate

Tepary beans: White or brown dry beans that grow in very low-water environments; they must be cooked half a day to soften