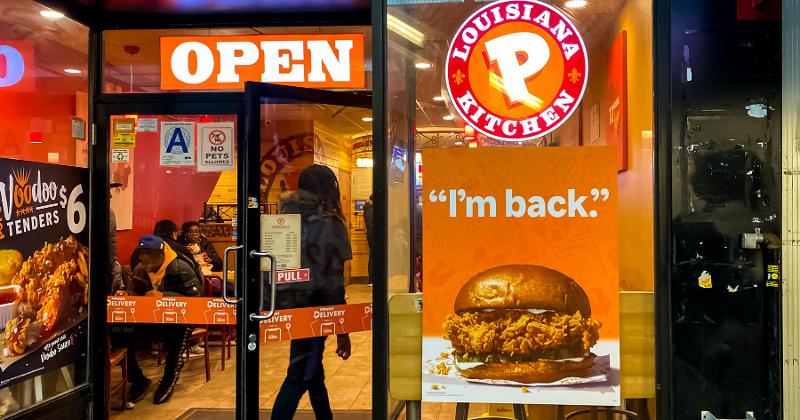 Not even a global pandemic can stop Popeyes Louisiana Kitchen.

That included a decline to “flat” in the last two weeks of March, a slowdown that reflects that of other fast-food chains.

“Popeyes’ success last year was unlike anything any of us have seen in our careers,” said Jose Cil, CEO of Popeyes parent company Restaurant Brands International, on the company’s first quarter earnings call Friday. “But its resilience in the face of COVID-19 with dining rooms closed across the country has been equally remarkable.”

Drive-thrus at fast-food chains have proven to be more resilient, as they are considered among the safer options for getting food, and they’re a demonstration that a restaurant location is open and operating.

At the same time, restaurants that rely heavily on breakfast have had weaker sales, as consumers lose jobs or work from home and thus are not commuting. Popeyes does not have breakfast, and it does have a drive-thru, so its sales have held up more than many other fast-food chains, including sister concept Burger King, where sales are still down in the teens, executives said.

Popeyes’ chicken sandwich has also proven to be a major draw, months after its introduction.

The sandwich has been the most popular new product introduction in recent fast-food history, generating stunningly long lines when it was first introduced in late August, draining the chain of two months’ worth of supplies in two weeks.

The company put the sandwich back on its menu in November, and fourth quarter same-store sales soared 38%, the strongest performance by a large, publicly traded restaurant chain in modern history.

The company has taken some steps to generate sales. It has focused heavily on delivery, which is up in the “triple digits.” “We continue to see delivery as a huge opportunity to reach guests and enlarge the trade area of our stores as the brand builds on the momentum it has sustained from last year,” Cil said.

Digital orders represent 15% of Popeyes’ sales, executives said, and 20% of the chain’s delivery orders are coming through its own mobile app.

The company has also worked to emphasize its off-premise business, which executives said has helped build sales.

For Popeyes, the result was a strong increase in brand-level profits. Earnings before interest, taxes, depreciation and amortization, or EBITDA, were $54 million in the first quarter, up 35%.