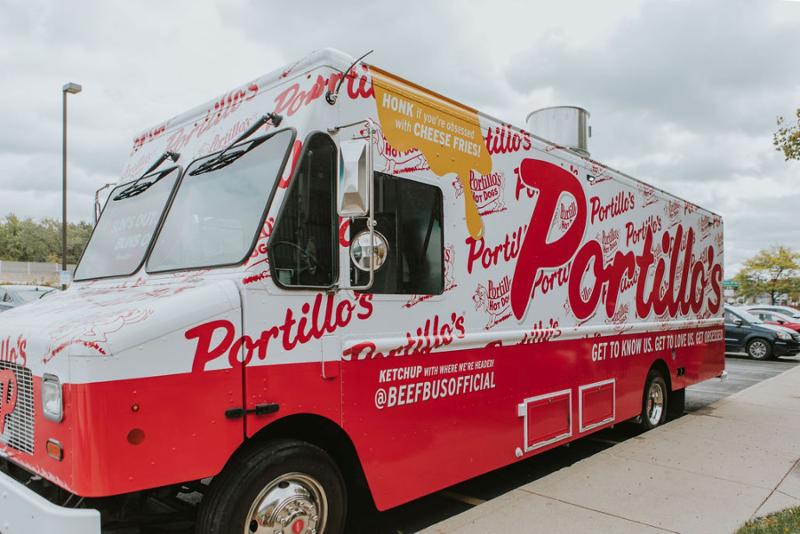 “You’ve got to be really happy to strap in and go up and down,” Osanloo said just hours after Portillo’s stock began trading under the ticker PTLO on NASDAQ.

For his part, he said he was excited to be on the ride. And he noted that the chain’s new investors seemed to share his sense of adventure.

Portillo’s, known for its menu of regional Chicago specialties such as Italian Beef sandwiches and hot dogs as well as its lucrative drive-thrus, set its stock price for its initial public offering at $20 per share—the high end of its range. The stock closed at $29.10 per share Thursday and was once as high as $31.87.

The company raised more than $405 million from the IPO.

The Oak Brook, Ill.-based chain, which has said it hopes to grow to more than 600 units in the next 25 years, is now on a mission to spread its brand message around the country. This week, for example, the chain’s Beef Bus (which posts its daily locations on Twitter via @beefbusofficial) was parked in New York City’s Times Square, giving out samples of Italian Beef, Chicago-style hot dogs and the Portillo’s signature chocolate cake.

“It’s just been such an interesting experience, explaining Italian Beef is not like a weird, exotic thing,” Osanloo said. “Our best bet is when we get our food in people’s mouths … Our formula for success has been very consistent. We do amazing field marketing.”

He added: “We love our Chicago roots. But we don’t need to be a Chicago restaurant when we go into other markets. We like to be a local restaurant.”

Going forward, Portillo’s is targeting 10% unit growth per year via “natural, organic expansion through the Midwest,” he said, as well as “opportunistic growth along the Sunbelt.”

Fast-growing states Texas, Arizona and Florida will be a priority for Portillo’s.

“There’s a lot of latent brand demand for us,” he said. “We know Texas is the No. 1 place we ship our food to.”

Plus, he said, all those warm-weather states are where Chicagoans flee when “they get fed up with Chicago winters.”