RESTAURANT BUSINESS: So why did you want to focus on Conscious Capitalism for this issue? 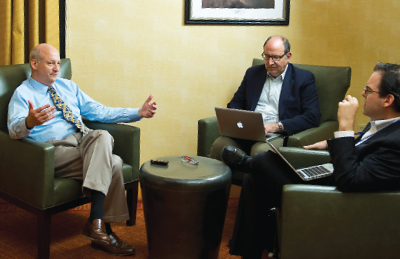 SHAICH: Conscious Capitalism is an expression of how I’ve always found success in the restaurant industry. I think that our whole society, our corporate society would be… better served if they think about their businesses in relationship to it. My greatest hope is just to open people’s minds to better ways to do [business].

RB: Is there anything about this moment in time that makes this sort of business model more compelling to customers?

SHAICH: We live in an oversold, overhyped, over-commercialized society where people feel gamed and manipulated. Those [companies] that stand for something that consumers trust stand in stark contrast to the more mechanistic model.

RB: Do you think that trust in companies is what gets consumers excited?

We live in a society in which we’re thinking shorter and shorter term, but real values often require long-term commitments and I think that applies in business.

RB: What is long term for you?

SHAICH: Three, five, seven, 10 years… I’m completely focused on trying to figure out, “Where is the future going?” Where is Panera’s competitive position going to be in that future? And how do we serve our higher purpose as that future unfolds?

RB: How much uncertainty is involved in this? How often do you make decisions about the direction to take your company that you don’t know if it’s going to work or not?

SHAICH: Let me start with something: life isn’t about certainty. You want certainty? Stay in bed. I mean, walking across the street is uncertain.

I would say to you that what we at Panera try to do is make what we call… smart bets. I don’t gamble. I don’t like to play any game where I don’t feel like I’ve got the odds with me, and so to me a smart bet is where we feel like we understand something, we know something that somebody else doesn’t… The concept of smart bets is making informed decisions rooted in a long-term stand and a clear vision of the future. Now, let me say that I’m risk averse. I think most smart entrepreneurs are.

You create a competitive position by coming from something that isn’t the flavor of the month, that’s what higher purpose is…

RB: If you were giving a small chain advice on getting involved in Conscious Capitalism, what would your advice be?

SHAICH: Believe in yourself and why you got into it. Believe in the things that attracted you to this industry, which is making a difference in the lives of your guests. Believe in what you did when you ran one restaurant, which is you treated the people you worked with humanity and dignity because they worked right next to you. Take care of your stakeholders and let the profits follow. Don’t focus on growth as the end, focus on running a great restaurant. When you run one then focus on how do I do that multiple times? But it’s that one restaurant that’s the key, and in so many ways I would argue that the big companies have got to learn from the little companies. The little companies are the ones creating incremental value. It’s the big companies that get disconnected, and the totality of the challenges of running huge organizations with tens of thousands of people and constituencies and numbers, and the fact that it’s so important locks executives of larger companies up. And I would argue success comes when guys like me who are involved in running big companies think and act from the paradigm of running one store very well.