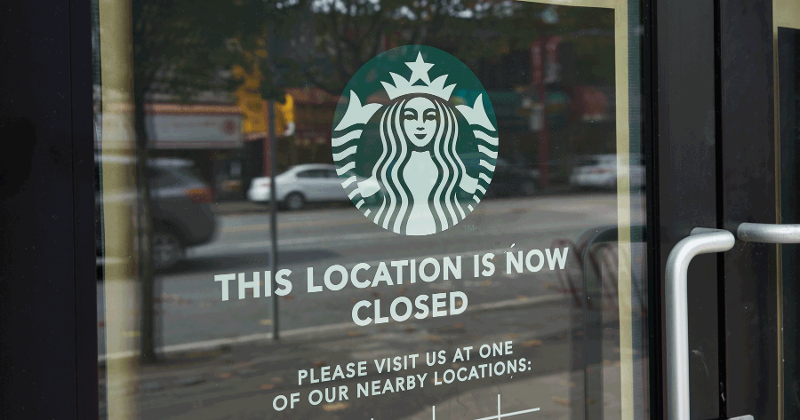 Restaurant chains are largely seeing their sales recover during the pandemic. But it isn’t keeping them from closing restaurants.

On Thursday, Starbucks said that it would close 200 more locations in the Americas in the coming 12 months than it originally said it would back in June, including another 100 in the U.S.

The closures are part of a “transformation” of the company’s asset base, as it replaces lower-performing units in urban business districts with suburban locations with drive-thrus.

But it’s not the only one. Rival Dunkin’, facing some of the same consumer shift, has closed nearly 700 U.S. locations, nearly 450 of them inside Speedway locations, as part of that chain’s effort to “scrub” its asset base of lower performing locations. Like Starbucks, Dunkin’ plans to replace those locations with newer, remodeled units, preferably with drive-thrus.

The challenges in urban areas are clearly causing problems for some entire chains that built their business by locating where people work:

It’s not just coffee chains, either. Pizza Hut earlier this week said it has closed 700 locations over the past year. That largely includes some 300 U.S. restaurants owned by the bankrupt franchisee NPC International. Much like both Starbucks and Dunkin’, its closures are part of an effort to shift its asset base, in this instance from dine-in restaurants that are not performing, to delivery and takeout locations that are thriving.

Dine-in concepts have seen significant challenges in recent years that have only accelerated during the pandemic. That has led to bankruptcy filings and mass closures at chains like Ruby Tuesday.

But a number of non-bankrupt chains are also facing major unit closures. That includes the family dining chain IHOP, which could close “just under” 100 locations, in addition to previously announced closures. Consumers simply aren’t going out to breakfast as much as they once did, and its rival Denny’s could also close some locations, too.

Some fast-casual restaurants are also closing locations. Rubio’s, which filed for bankruptcy early this week, is exiting entire markets following its bankruptcy filing. And the 13-unit buffet chain Country Cookin closed all of its locations.