Grocers are increasing prices, which is good for a restaurant industry in need of catalysts to drive more sales.

Food-at-home inflation, meaning prices at supermarkets and grocery stores, rose 0.9% year over year in December, according to recent federal data. That was the steepest increase since July of 2015.

Food-away-from-home inflation, meaning restaurant menu prices, rose 2.5% in December over the same month a year ago.

The inflation “gap” between the two biggest purveyors of food to consumers was 160 basis points, or 1.6%. That was the narrowest the gap has been since April of 2015. 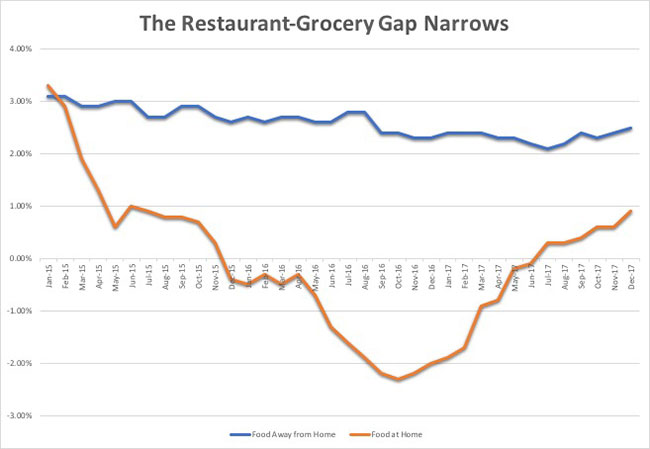 The gap in pricing between restaurants and grocers has been a point of concern for much of the past two years.

Grocers last rose prices at a rate higher than restaurants in January of 2015. That month, perhaps coincidentally, was the best in the post-recessionary era.

Since then, as the cost for proteins like beef and pork has fallen, grocers have eased their prices.

While restaurant menu inflation has gradually slowed in the three years since that month, the industry has maintained a steady diet of price increases. As such, at some points in 2016, restaurant inflation was over 450 basis points higher than grocer price inflation.

That gap has been given at least some of the blame for weak sales. Same-store sales at restaurants declined in both 2016 and 2017, according to the Black Box Intelligence monthly index.

The actual impact of that gap is difficult to discern. And a ton of other issues could explain weak sales, such as overdevelopment and challenges from independents.

But same-store sales rose 0.28% in the last three months of 2017, according to Black Box Intelligence. Grocers raised prices more aggressively in those months.

That said, the gap had narrowed significantly in July, too, and that was one of the worst months during that period, with same-store sales down 2.8%.

Still, a narrowing gap should provide at least some help to a restaurant industry that enters 2018 with some hope for sales improvement after finishing the worst period in the post-recessionary era.

Theoretically, lower grocery prices the past two years gave consumers less of a reason to dine out and ultimately hurt restaurant industry sales and traffic. After all, if you find a deal on steak at the local grocery store, you’ll stay at home to eat that steak rather than eat out.

Rising grocery store prices, therefore, could provide some opportunities for the industry to regain some of that lost traffic.

To be sure, restaurants have significant labor cost challenges that will likely force them to keep raising prices for the foreseeable future. That could be a problem even if grocers are using their price guns more aggressively.

Restaurants are more labor-intensive than are grocery stores. That automatically puts them at a disadvantage, because they have had to continue raising prices the past two years even as grocers were able to lower them as food costs fell.

All that said, restaurants are actually taking it easier when it comes to menu prices, likely cognizant of that gap, and are worried about falling traffic. Last year, the average monthly menu price at restaurants increased 2.3%. The year before that average was 2.6%. And in 2015 that average increase was 2.9%.

Many executives at the recent ICR Conference in Orlando, Fla., for instance, noted that they were careful when it came to price increases—especially at casual-dining chains.

And, indeed, while the inflation gap is narrowing, it’s still important to point out this: Restaurant prices remain much higher than they were three years ago, compared with their grocery counterparts.