Beer and wine service may be coming to a quickservice restaurant near you. Reportedly, White Castle, Starbucks, Sonic and Burger King’s Whopper Bar are all conducting limited tests. No doubt execs are eyeing the lucrative margins of beverage alcohol, but also see the challenges of sourcing, policing sales and restricting underage employees from service. 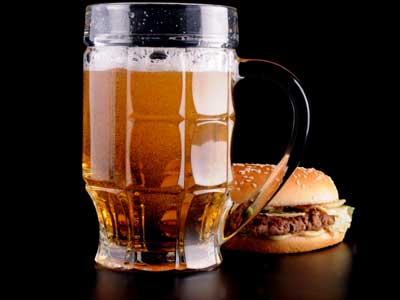 Not that there’s much pie to cut into. Technomic, the Chicago-based consultancy, forecast small gains this year, predicting overall expenditures on alcohol away from home will grow 2.4 percent. However, beer seems to be losing share. Technomic reports that wine increases will reach 3.5 percent; spirits, 2.3 percent; and beer, 2.2 percent.

The glass-half-full crowd is toasting any gains at all. Certainly, craft brew continues its remarkable growth. Although those increases are off a small base, craft beers have been expanding market share for over five years now.

Import beers, formerly the prestige on-premise call, now seem to be taking a few pages from craft beer’s book. Guinness’ new Black Lager aims to appeal to beer drinkers who are looking for something a little different from domestic pilsners. Wheat beers are popular craft categories—something Amstel Brewing, best known for its light beer, must have considered when it recently launched Amstel Wheat, available in the U.S. on draft and in bottles. Newcastle Breweries has been busy releasing seasonal brews to the U.S. A new debut is Newcastle Founders Ale, an ESB style for spring. It joins Newcastle Summer Ale, Werewolf and Winter IPA on a rotating seasonal lineup.

Sour is the new hoppy

“Sour ales are definitely an acquired taste, but more people seem to be acquiring it,” notes Erin Wallace, owner of Old Eagle Tavern and the Devil’s Den in Philadelphia. Wallace is a big fan of the sour category, and both establishments stock an impressive number. Old Eagle Tavern regularly offers five to 10 examples among its 11 drafts and 60 to 75 bottles. With 17 taps and a 200-bottle list, the Devil’s Den boasts 30 to 40 sour selections. “IPAs still dominate the lineups because people love hoppy beers, but that’s changing,” says the owner.

Selections at both bars change frequently. Some of the imports are highly allocated, and, laments Wallace, there is growing competition as more operators offer the category.

The sour ale category covers a number of styles from all over the world (see sidebar) and flavors range from sweet-tart or fruity to funky/earthy or intensely acidic. “When people are into beer and become more educated, sour ales are a new category to try,” posits Wallace. Some styles, such as Flemish Brown Ale, share similarities to wine, she says, and may appeal to people who don’t otherwise like beer.

Sour ales have an affinity for certain foods, Wallace adds. She pairs them with spicy cuisines because the acidity tames the heat. The beers are also good companions with seafood dishes. “And during the summer, the beers’ tartness is refreshing,” she notes. Wild ales—those spontaneously fermented and soured by wild yeasts and bacteria—tend to be lighter with more carbonation, making for good summer quenchers.

Because the ales are so different from most beers, they benefit from hand-selling. And both restaurants offer free samples of the draft beers to inquisitive patrons. Wallace continually educates her employees about the beer selection, with staff tastings.

Every year, Wallace celebrates her birthday with a Sour Fest at Devil’s Den. The week-long event dedicates an eight-line tower to a rotating selection of sours, supplemented by rare bottles. The chef orchestrates a four-course tasting menu paired with appropriate tart ales. The Sour Fest has garnered wide-ranging interest in the category, as well as developing a destination reputation for Devil’s Den. “We get customers traveling here just to try some of our sour beers side by side,” says Wallace.

Sour beers originated in Europe, but American craft brewers have expanded upon them. Here’s a rundown of styles.