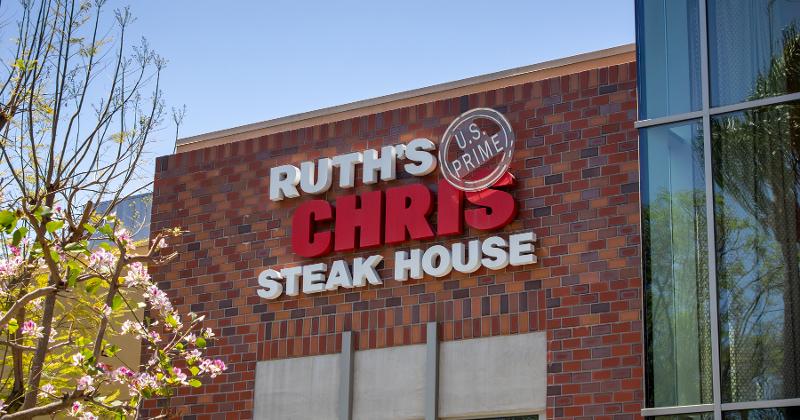 Profit margins increased from year-ago levels at 16 of the 24 company-operated Ruth’s Chris Steakhouses that offered dine-in service during June, making the high-end brand the latest full-service chain to discover new efficiencies in the operational overhauls mandated by the coronavirus pandemic.

The margins rose to “well in excess of 20%” despite a 19% slide in sales for the group, according to Cheryl Henry, CEO of parent company Ruth’s Hospitality. She attributed the upswing to labor savings, a result of trying to limit how many staff members interact with a seated party. Yet, she told financial analysts on Friday, Ruth’s customer satisfaction scores have risen.

Neither she nor other executives revealed how operations were tweaked to cut down the number of crew members who had direct dealings with patrons. CFO Arne Haak asserted that part of the savings came from staff members being highly motivated after being out of work for six weeks.  He also noted that the brand benefitted from favorable food costs, and Henry said the brand benefitted from the rollback and simplification of Ruth’s menu.

“Hopefully this is sustainable,” Haak said.

The steak chain isn't the only full-service operation to find new efficiencies in the safety measures and new realities imposed by the coronavirus pandemic. Gene Lee, CEO of The Capital Grille parent Darden Restaurants, has reported similar discoveries.

"When we basically closed down the operation except for off-premise, we had the chance to rebuild as we opened back up and we had a chance to look at all our processes and procedures, and I think we were able to simplify and eliminate a lot of prep work in some of our businesses that we'll never get back into the business," he told investors in late June.

Ruth’s was able to limit the impact of 50 or 25% capacity caps on the 24 stores by turning private dining spaces into regular dining areas and thereby increasing the overall number of seats. She also suggested that the concept’s business might have picked up in the shoulder times of late afternoon and post-dinner-rush.

Henry also aired an opinion that consumers are turning again to Ruth’s for the celebration of special occasions such as birthdays, anniversaries and graduations.

Restaurants with open dining rooms averaged $84,000 per week in sales during June, the company said..

Henry noted that the chain ended June with 59 company units offering some level of dining-room service, but the tally has fallen because of California’s second suspension of indoor service on July 13.  Twelve corporate restaurants were still limited at the close of the quarter to takeout and delivery,

About 68 franchised restaurants are offering some sort of service, with four still closed.

Five company restaurants were permanently closed, according to the franchisor, and five more are on a watchlist for possible shutdown, the officials revealed. They also noted that the company had terminated two of seven leases for planned new branches.

For the second quarter, Ruth’s Chris suffered a 74% same-store sales decline, with franchised units down 64% domestically. Ruth’s Hospitality posted a net loss of $17.6 million, compared with a year-ago profit of $9.3 million. Revenues dropped 74.2%, to $28.4 million.