When we asked several operators how they define a successful Restaurant Week, they agreed on one measure: high traffic. John Howie, owner of two Seastar Restaurant and Raw Bar locations in the Seattle area, sees 600 to 700 more guests than he normally would—200 of whom never have dined at Seastar before—during a 10-day Restaurant Week. But catering to the expanded crowd—and inspiring their return after the promotion—requires planning, proper staffing and cost considerations. And that, say most, doesn’t happen by chance. 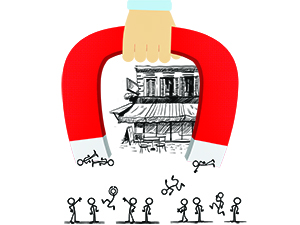 While having a full house every night is the goal, a key part of the preparation for Restaurant Week is having a realistic expectation of how many guests are manageable and planning reservations based on that number. “Don’t overcommit,” says Tommy Marcinko, general manager of The Macintosh in Charleston, S.C., especially since it’s a time to build a new clientele. “There’s nothing worse than starting out that first-time experience by not having [the guest’s] table ready when promised,” he says.

Also important is being well staffed and alerting servers of what to expect. Some operators give pep talks about how lower-than-normal check averages don’t necessarily mean less money in servers’ pockets, since volume makes up for lower tips. “For about two weeks, servers just have to work harder for the same amount of money,” says Howie, who communicates the value of Restaurant Week by reminding his staff that it is “an investment in our long-term health as a restaurant.”

It’s that investment in future business that eases most operators’ concerns about lower profit margins. “Food costs are definitely higher than the rest of the year,” says Russell Masraff, co-owner of Masraff’s in Houston, as customers gravitate towards dishes they perceive to be a better value for the lower price tag. But experienced operators caution that giving the Restaurant Week menu short shrift can backfire, dissuading customers from choosing their operation. “Don’t try to outsmart your food costs,” says Michael Cordúa, founder and chairman of Cordúa Restaurants in Houston. “People see through that.” Masraff agrees. Diners notice when restaurants try to protect profits by padding the menu with pasta and other low-cost dishes, he says.

>Howie goes a step farther. Participating Seattle restaurants are required to offer at least three entrees, but Howie puts up to eight choices on Seastar’s menu to reflect a “normal” service. It makes good business sense, too, he says, as “it spreads the work out [among kitchen] stations more evenly.” With only three entrees on offer, “especially when one is a shining star,” he says, certain cooks are likely to get in the weeds.

And it’s not just food that can drive Restaurant Week traffic. Cordúa puts together a specially priced cocktail list to go along with Restaurant Week deals and play to the groups of women he often sees dining together during the promotion. The discounted cocktails, such as a mojito for $8, are very popular, he says, so these increased alcohol sales, along with volume, help offset food costs.