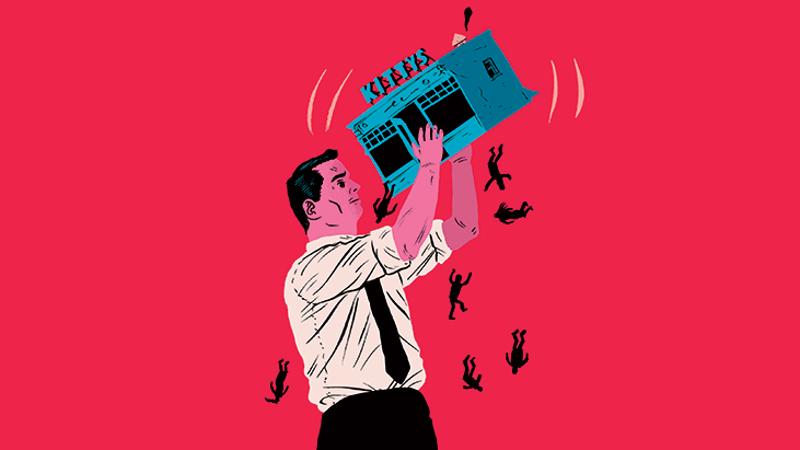 There is one very important characteristic that sets the restaurant industry apart from other industries in the eyes of private-equity investors: You can’t eat through a computer.

“While the world is moving toward the Web and e-commerce, you either go out to eat or you don’t,” says Steve Liff, a managing director at Sun Capital Partners, whose investments include Johnny Rockets and Boston Market. “There’s not the same threat from e-commerce on the brick-and-mortar that you see with retail.”

That is a strong bulwark against disruption, but the truth is, there seem to be opportunities everywhere private equity looks in the industry these days. A hot new concept represents opportunity. But so does a flagging legacy brand. And on’t forget about franchisees. It’s all about the potential a restaurant company has; and understanding the potential private equity sees in various segments can help operators in the market for capital.

“There are very few industries out there where an investor could have the kind of exponential growth in a reasonable period of time they can have with restaurants,” says Burt Feinberg, head of corporate finance, retail and restaurants at investment advisor CIT.

Large franchisees are the darlings of the investment community. “They are very appealing to some private-equity funds,” says David L. Epstein, principal at J.H. Chapman Group, which conducts an annual survey of restaurant-investment activity. “Franchisees come in with a lot of knowledge on how to operate units successfully,” he says. “If they’ve operated successfully in the past, there’s no reason they wouldn’t continue their success. And they’re always looking to grow.”

As investment goes, putting money in large franchisees is as safe a bet as private equity will get. Adding units to an already robust and profitable company spreads out operating costs and drives up EBITDA.

“Franchisees can be less attractive than franchisors, because they don’t own the brand,” says John A. Gordon, who tracks restaurant investment for Pacific Management Consulting Group. “But the trade-off is a low price to EBITDA. You can buy in for less money.”

Investors can see a franchisee’s monthly statement, says Epstein. “They can see their success. They are realizing that putting out money to an existing franchisee is a lot safer than investing in a brand-new concept.”

It’s also about those running the business. “When private equity buys a franchisee, they are buying a management team,” says Feinberg.

Big deals: Acon Investments has gone big into Applebee’s franchising, fueling the expansion of RMH Franchise Corp., which has grown to be the second largest Applebee’s franchisee in the nation with 139 units. And the No. 1 Applebee’s franchisee, Apple American Group, has driven growth in the past two years with investment from private-equity fund Weston Presidio, which also has invested in the country’s largest restaurant franchisee company and Apple’s parent, Flynn Restaurant Group, valued at over $1 billion.

There are concepts that are established regionally and just need the investment to prop up national expansion. And then there are national legacy brands that have lost their way.

“A private-equity fund needs to see a path of restructuring these legacy brands. We’re not talking about going bankrupt. We’re talking about restructuring operations. ‘What price can I pay for this that will still allow me to fix it in the time I have?’” says Epstein.

“What often happens with a legacy brand is it seeks out growth and loses focus on the core customer,” says Josh Cohen, a managing director at Golden Gate Capital, which bought Red Lobster for $2.1 billion last year.

He says that’s what happened with Red Lobster. As the recession left everyone trying to find opportunities, the seafood destination started discounting, even though its core customer saw it as a place for special occasions, not coupon meals. Cohen says their research showed the brand still resonated with consumers, but operationally it was weak. Just the sort of mix private equity likes.

“It’s rare that you can buy the scale of a Red Lobster. A national advertising platform, 700 stores they are operating, resonating with consumers across the country, strong real estate—you marry those assets with a strong management team, and good things tend to happen,” Cohen says.

Golden Gate has begun revamping the brand under the leadership of Red Lobster CEO Kim Lopdrup. Step one has been redoing the menu, adding larger portions and getting rid of some nonseafood dishes. It will tackle in-store design next and already has completed a sale-leaseback deal to convert real-estate holdings into cash.

PE investment target: Up and comers

The image of the opportunistic investor monitoring the landscape for emerging, on-trend concepts to hitch a wagon to still is very much alive in the industry. And it represents an investment structure a lot of folks in the business are familiar with: Get in early, cash out quick. At a half-day session on investment during the National Restaurant Association Show in May, speakers expounded on where private equity finds potential in this category.

“The No. 1 thing is sales per store and sales per square foot,” said Josh Goldin, managing partner of the Alliance Consumer Growth fund, which has investments in PDQ, based in Tampa, Fla., and New York City-based Shake Shack. “For us, it starts and ends with unit volume. If your concept is not so extraordinary that you’re not doing extraordinary unit volumes,” it won’t keep Alliance’s attention.

A private-equity investor also is drawn to concepts run by management that is “flexible and open-minded,” but still tough enough to provide the leadership needed through the transition and the acceleration of expansion, said Russ Bendel, CEO of Irvine, Calif.-based The Habit Burger Grill and the former chief of Mimi’s Cafe, both of which sold significant stakes to PE player KarpReilly.

“If you find the right concept, the growth prospect relative to other industries is huge. You can actually take 10 units to 1,000,” says CIT's Feinberg.

“We are seeing private-equity firms identifying and investing in smaller brands below the 20 unit level,” says Technomic EVP Darren Tristano.  “PE firms look for strong unit economics, profitability at the headquarters, consumer appeal and sophisticated systems that are easily extended into larger systems that don’t have to be recreated.”

Big deals: Earlier this year, Bellevue, Wash.-based, 32-unit fast casual Mod Pizza (No. 5 on the 2015 Future 50, see Page 50) pulled in a staggering $40 million in investment led by private-equity fund PWP Growth Equity. The chain boasted impressive unit sales and a board with a pronounced restraint pedigree, including Jim Alling, chief operating officer of T-Mobile and the former president of Starbucks International and Starbucks North America.