Gallons of excitement are simmering in the soup pot these days. Although a cup or bowl of soup has long been a standard menu starter, restaurants are now offering more inspired choices and many rotating selections. Soup is even the focal point for a number of concepts, with bakery-cafes a very active segment. 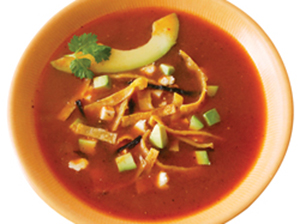 Those operations that employ skilled chefs tend to create their own signature soup recipes to lure customers. But to meet patrons’ higher expectations, soup manufacturers have also stepped up to the bowl, expanding and upgrading their offerings. Soup can be a significant profit center for an operation, and the higher the quality, the higher the sales. Here’s what’s cooking.

Gallons of excitement are simmering in the soup pot these days. Although a cup or bowl of soup has long been a standard menu starter, restaurants are now offering more inspired choices and many rotating selections. Soup is even the focal point for a number of concepts, with bakery-cafes a very active segment.

Those operations that employ skilled chefs tend to create their own signature soup recipes to lure customers. But to meet patrons’ higher expectations, soup manufacturers have also stepped up to the bowl, expanding and upgrading their offerings. Soup can be a significant profit center for an operation, and the higher the quality, the higher the sales. Here’s what’s cooking.

Many restaurants like to rotate in new soups on a seasonal, weekly or even daily basis. But certain varieties remain perennial favorites and can never be taken off the menu. Datassential MenuTrends Direct reports Americans’ top picks.

Soup of the day

Operators share their strategies for menuing and selling soup

At a central commissary in Brooklyn, Rogers preps about 1,800 gallons of stock each morning for the 16 to 20 soups dispensed daily at 23 Hale & Hearty locations. The company employs a vegetable buyer who works out of the Philadelphia farmers’ market just to supply the fresh produce that’s delivered every weekday; a separate supplier handles the huge orders of chicken bones and tenders and other meats. “We have a separate walk-in set up just to receive the chicken,” he notes.

Rogers tries to keep things seasonal as he creates new recipes and tweaks old ones. “The only frozen vegetables we use are peas, green beans and artichokes,” he says, “and none of the fresh produce is cut until it’s ready to go into the soup pot.” Top
selling soups include Roasted Butternut Squash, Tomato Cheddar, Corn Chowder (made with corn shucked from the cob) and Tomato Basil with Rice. “We get a tremendous number of emails requesting vegetarian soups, so I’m focusing on introducing more in that category,” Rogers reports. He tries to add a new soup each week; a recent launch is Autumn Minestrone—chock full of harvest vegetables with the plus of being low in fat, dairy free and vegan. In step with the comfort trend, he’s also experimenting with an old-fashioned chicken and dumpling soup enriched with sour cream and potato dumplings.

Working out of a test kitchen at this bakery-café’s corporate headquarters, Thompson develops a roster of soups that changes three or four times a year. The signature recipes are then prepared in bulk by Einstein’s vendor partner and turned into  proprietary products that are delivered to each location. “We use one vendor to customize the soups according to our specs so the results can be duplicated and consistent in each store,” he explains. “I work on the recipes six months ahead so our supplier has time to procure the ingredients in high volume.”

This partnership has allowed Einstein Bros. to put more emphasis on soups in the last few years. Four choices are offered every day, making it convenient for customers to build a complete lunch option. Top sellers include Chicken Noodle, Turkey Chili and Broccoli-Cheddar. New for fall is 7-Onion Soup, “containing onions you might never see in a French onion soup,” Thompson points out. It’s topped with bagel croutons sprinkled with a blend of Parmesan and provolone cheeses. “A good soup has to have good bread, so we’re always looking for cool bagel garnishes,” he adds.

Thompson is keeping an eye on several trends as he develops soups for winter and spring. “Bisques are very ‘hot’ right now and I’m looking at lower sodium options,” he says. He’s also pushing to use ingredients closer to home. “Instead of importing shrimp from China, I’m sourcing Gulf shrimp, for example, and trying to use ingredients that support local farmers.”

The soup and salad bar has been an attraction at this Lettuce Entertain You casual concept since it opened its doors in 1971. And even though Chicago is a soup town—especially during the frigid winters—the kitchen is always working on new recipes and promotions to satisfy its loyal customers.

“We start our stocks fresh every day and from there create hearty soups with ingredients in season,” says Melman. Chicken Noodle has been a staple since the beginning, but other crowd-pleasers include Tortilla, Mediterranean Lentil, Chicken Pot Pie and Cheddar Cheese. In an odd twist that’s turned into a successful promotion, patrons snag the biggest bargains in the winter, when soup cravings are at their height. RJ Grunts offers two varieties of its much-anticipated “Temperature Soup,” priced to correspond with the temperature outdoors.

“Although sales go up, prices go down,” quips Melman. It’s not uncommon for soup to sell for as little as 10 cents during a string
of chilly days. This past year, the restaurant tried a variation on the theme: Economy Soup. Portions were priced based on the Dow Jones Index—divided by 10,000.

No one can mess with Kelly’s Clam Chowder—the family recipe has been passed down from the original beachfront Kelly’s that opened in 1951 and “is near and dear to our hearts,” says Paula. “We spec chopped sea clams from Seawatch in Charlestown [Massachusetts] that are packed expressly for us and the cream comes from a local dairy. It’s our signature soup and best seller.”
It’s also the only soup that the five-unit fast-casual concept cooks from scratch. “We used to make our own chicken noodle soup,
but we found a Massachusetts vendor—Kettle Cuisine—with a consistent, high-quality product. Purchasing their soup is a smarter option for us—it guarantees consistency from location to location,” he adds. Cream of Broccoli, Tomato Rice and Loaded Potato Soup are some of the other varieties popular with Kelly’s customers. In addition, Kettle Cuisine is currently developing a chili base exclusively for this regional chain. “It’s our first custom soup. It will come to each location and we’ll add the beef on site,” Paula explains.

Using a local supplier has distinct advantages; store managers and shift supervisors visit the plant periodically to get a look at production and see the ingredients that go into the different soups. “It makes our staff proud of where the products come from—and makes them more likely to suggest a cup of soup as an add-on to an order,” says Paula.

The soup pots bubble year round at this venerable Manhattan tavern, although richer, heartier
bowlfuls dominate in winter. PJ Clarke’s motto is “it’s never too hot for soup and never too cold for iced tea.” DeFonzo, who develops soups for all four locations, says “I give the same recipe to each restaurant kitchen, but leave some room for different pairs of hands to add their personal touch.”

Vegetables are prepped in house for all the stocks and DeFonzo then builds the soups in a tilt braiser. Always on the menu are New England Clam Chowder and French Onion Soup. “Beef Barley used to be a staple too, but now I do a Vegetable Barley,” he says. Louisiana Gumbo and Tomato Cheddar also rotate into the lineup.

In a departure from these straightforward soups, DeFonzo created a Truffle Soup with Pastry Raft & Old Amsterdam Foam for September’s NY400 celebration—an event commemorating New York City’s Dutch roots. The elegant ingredients include truffles, heavy cream and grated Old Amsterdam cheese blended together and presented in an espresso cup topped with an ethereal cheese foam (above).

Instructor, Culinary Institute of America, and consultant to The New Book of Soups by the Chefs of the CIA

What trends are you tracking?
Soup is ubiquitous in all cuisines, but right now, we’re taking a closer look at Korea, Brazil, Argentina and Chile. We’re also veering away from flour-thickened soups and towards lighter vegetable purees for thickening.

Why are soups especially popular now?
They fit into the economies of cooking and food cost savings. Soups are one-pot operations that allow a kitchen to cross-utilize ingredients. There’s also the “soul value” of a steamy bowl of soup—a plus in today’s economic climate.

How can restaurant kitchens increase operational efficiencies?
Cut all the vegetables for all the soups you’re preparing at once. Frozen, pre-cut vegetables are also a timesaver. Build your soup menu so you can repurpose ingredients and even recycle the soup from one day into the next day’s selections.

Can you suggest a good number and assortment of soups to offer?
Three to five choices provide enough variety without overwhelming customers. Include a brothy soup, something thick and hearty and a specialty soup for differentiation. Focus on seasonal favorites, like mushroom or pumpkin soup in the fall and a cold soup in the summer. And always have a vegetarian choice.

Is there special equipment needed for a successful soup program?
For soups from scratch, steam jacketed kettles are handy. I also recommend a good blender for pureeing. And a device to package soup into heavy-duty, 1-gallon plastic bags that can be chilled and reheated quickly. This is not only a convenience, it’s a smart HAACP procedure.