How one large operator went natural. Good food on a grand scale” was Rob Katz’s mission as CEO of Vail Resorts, which operates five ski resorts housing 40 dining venues in Colorado, California and Nevada. “I couldn’t radically change our menu items but I could change the ingredients,” he says. 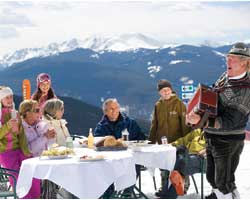 So for the 2007-08 ski season, Katz made a commitment to buy and serve only natural, hormone-free meats and poultry and organic dairy products. The challenge was to find suppliers; lunches alone number 2.5 million during a winter at the mountain restaurants. Katz tapped two Colorado companies—Coleman Natural Foods and WhiteWave Foods (parent to Horizon Organic dairy and Silk soymilk). Neither supplier had ever fulfilled such a tall order, but they stepped up.

Horizon sells most of its pre-sliced organic cheese—the type used for the resorts’ lunch sandwiches—to retail outlets. “It was a big effort for them to gear up for foodservice, but we found processors and packers who could handle the slicing and wrapping,” Katz says. WhiteWave is also making Silk soymilk available in single-serve containers. About 87 percent of dairy products will be organic; eggs and ice cream couldn’t be sourced in sufficient quantities this year but Katz is working on it. Most of the deli meats, ground beef, hot dogs, bacon, chicken and other pork and beef products will come from Coleman. Katz offers advice to others: “Talk to the food companies you want to do business with. Most are very willing to cooperate. I’m purchasing directly from my suppliers, but smaller operators would probably find it better to work through a distributor.” While he admits he’ll initially be “eating a lot of the costs” for the changeover, “being out in front with these trends will pay dividends later on.